I Don’t Want A Sci-Fi Future 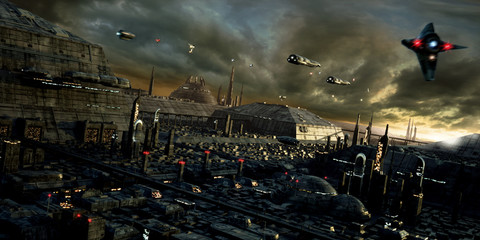 I don’t desire a future for humanity like the ones imagined by our culturally designated future imaginers. I don’t want humans living in Elon Musk Mars colonies or Jeff Bezos space cylinders. I don’t want us to fly out into the stars, to disappear into virtual reality universes, or to move away from our humanness by becoming cybernetic organisms.

Not yet anyway. Not for a long time. Not until we’ve done what we need to do here first.

Have you ever noticed that most books, shows, and movies set in the future tend to depict a humanity that’s more technologically advanced than our own, but thinks and behaves in basically the same way? In the average sci-fi story people are still waging wars, still fighting, conquering, subjugating, toiling, and surviving just like today, except they’re doing it out in space surrounded by a bunch of aliens (who are also oddly entangled in the same egoic patternings as humans in the 21st century).

In this common vision for the future, we have mastered space travel but still haven’t mastered basic psychological health. Our technology has enabled us to kill, enslave, manipulate and exploit among the stars so that we are no longer confined to killing, enslaving, manipulating, and exploiting down here.

This tendency is also due to the fact that science fiction writers are telling stories for an immature civilization full of restless minds who would be easily bored by tales of a peaceful future without any major problems. But that’s the kind of future that I want for humanity. A peaceful one without any major problems. One that wouldn’t make a good Hollywood blockbuster.

And it’s actually kind of a problem that the future that humanity is mentally pointing itself toward is one in which all our restlessness and dysfunction persists. Our steps into the future will be guided by our collective vision for it, and when those visions are about space colonization, virtual reality, and transhumanism, our collective compass is going to be skewed toward dysfunction.

Right now for example, most human innovation goes toward generating profits and/or military dominance, which puts us on a trajectory toward more and more technologically advanced personal doodads to buy at the store and more and more ways of killing large numbers of people at a time. It doesn’t put us on a trajectory toward finding ways to make sure everyone has enough, to helping people have more leisure time, and to helping humanity move in harmony with our ecosystem. All of those innovations would do infinitely more to create a more pleasant future for humanity than spaceships and laser guns, but our systems do not give rise to them, because they are not profitable and don’t help increase a government’s military power.

There are so many assumptions baked into our collective visions for the future and the systems we’ve set up to carry us there. Assumptions like we’ll never have peace; we’ll always have violence, conflict, and domination; we’ll always have poverty and the need for endless toil; we’ll never be able to stop consuming our biosphere to death so we’d better get out into space so that capitalism can keep expanding. All of those assumptions point us away from a healthy and harmonious future.

And of course, that’s what you’d expect from a deeply unconscious species, which is what we still are currently. We’re still largely operating on autopilot like any other animal, whipped about by the forces of conditioning patterns that have been reverberating from the most distant reaches of our evolutionary ancestry. A collective history of trauma and fear combined with our newly evolved capacity for abstract thought has left us confused and disoriented in ways we haven’t yet gained lucidity on; an adolescent species in an awkward transition phase.

And I can’t help but think how productive it would be if, rather than spending our energy trying to dash off into outer space or bury our heads in virtual reality, our movement into the future was focused more on resolving all that? If rather than feeding into our unconscious restlessness by giving ourselves more and more places to try and escape to, we set about learning to simply be here now?

What if instead of trying to be anywhere but here, humanity made a mad push for enlightenment? What if instead of spending the next centuries trying to get away from the present reality, our society began emphasizing things like meditation and self-inquiry to help us finally truly meet the present reality? What if our science became less focused on profit and destruction and more on trying to find ways to help people be okay with themselves? What if psychedelic institutions were set up around the world to help everyone explore their inner realms and bring the unconscious into consciousness using skillful methods and entheogenic compounds?

I mean, most of us can’t even sit still in meditation for an hour without their mind racing all over the place and doing everything except what it’s asked to do. Does that sound natural to you? Does that sound like a conscious, healthy species? Or does it sound like a species that, if handed paradise on a golden platter, would immediately destroy it out of boredom?

A lot of what we see the most influential minds envisioning for our future just looks like restlessness to me, a relentless compulsion to be anywhere but here, much like the mental fidgeting of an individual attempting to meditate. We don’t even have any evidence that humans can live completely independent of Earth’s biosphere, yet it’s taken as a given that we’ll be running off into the stars so we don’t have to make the drastic changes in ourselves that will be necessary to sustain human life on this planet. The idea of simply settling down and learning to be here sounds unthinkably hellish to a mind enslaved to restlessness, to such an extent that it will concoct unrealistic fictions about the future rather than facing reality.

Even if we did succeed in colonizing space, it wouldn’t solve any of our problems, and it wouldn’t make our future any more pleasant. We’d just be moving our restless, violent, insatiable, discontented minds off-world, where we’ll immediately recreate all the same problems we created down here except we’ll be doing it in artificial bubbles surrounded by deadly black desert on all sides. I mean, you think Thanksgiving is hell? Imagine cooped up with your family all day every day in what’s essentially a mall that you can never leave. Is your head really ready for that?

A head rattling with mental chatter would be incapable of experiencing any wonder in space exploration and would be incapable of experiencing joy in the creation of virtual worlds. A serene mind experiences wonder and joy walking across a parking lot. What we really want is equanimity, not space colonization and VR. Deep down we don’t really want to be somewhere else, we want to be able to truly be here.

I’d really like to see humanity begin recalibrating its visions for the future away from these pathways toward glorified escapism and toward the creation of a healthy and harmonious world. It might not sell books and movie tickets (at least not right away), but it will point us toward where we all really want to be in our heart of hearts.