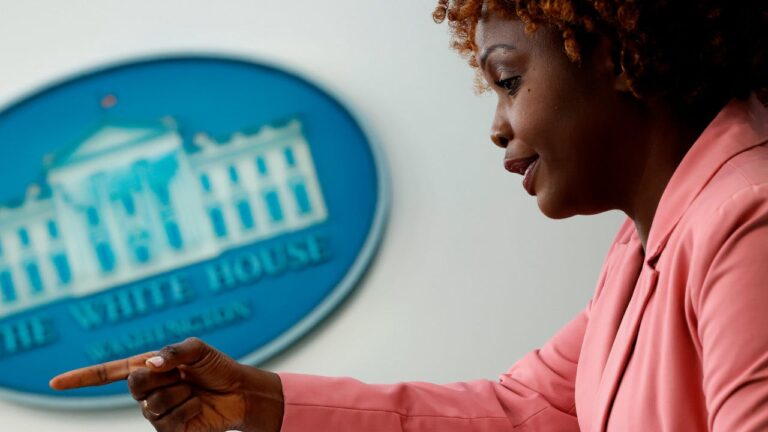 Following the latest revelations from the Twitter Files, the White House on Friday categorically denied any involvement in Twitter’s content-moderation decisions and said that no one had been in contact with former FBI general counsel Jim Baker before his exit from the company.

“We were not involved,” White House press secretary Karine Jean-Pierre told reporters when asked whether anyone from the Biden administration had been in touch with Twitter’s top lawyer before he was fired.

Questions abound about the extent of Twitter’s censorship of conservatives and COVID-19-response dissidents following publication of the so-called “Twitter Files” – a trove of internal documents and communications delivered to journalists Matt Taibbi, Bari Weiss, and other reporters at Weiss’ new outlet, The Free Press.

The first installment of the files, shared by Taibbi on Twitter, detailed the steps that Twitter took to throttle discussion of the New York Post’s bombshell Hunter Biden laptop story. Baker, the company’s former deputy general counsel, was “exited” from Twitter by CEO Elon Musk on Tuesday “in light of concerns about Baker’s possible role in the suppression of information important to the public dialogue.”

A second exposé was posted by Weiss on Thursday night, vindicating Twitter users on the right who had long alleged the that company was “shadow-banning” their accounts and suppressing disfavored information. Weiss reported that Twitter had blacklisted accounts or limited the visibility of certain tweets or trending topics, and done so in secret, without informing users. The company had previously denied doing such things.

So far, no evidence has been put forward suggesting that the government directed Twitter to censor or suppress speech. However, the White House has previously admitted to having a cozy relationship with social media companies that could complicate Jean-Pierre’s categorical statements from Friday.

“We are in regular touch with the social media platforms, and those engagements typically happen through members of our senior staff and also members of our COVID-19 team … specifically on the pandemic,” Psaki said in July 2021.

“Within the Surgeon General’s Office, we’re flagging posts for Facebook that spread disinformation,” Psaki added. “We’re working with doctors and medical professionals to connect medical experts with people, who are popular with their audiences with accurate information and boost trusted content. So, we’re helping get trusted content out there.”

The Twitter Files confirmed that Dr. Jay Bhattacharya, a Stanford University professor of medicine, was one of many users who had been put on a “blacklist” for arguing against COVID-19 lockdowns. He told Fox News’ “The Ingraham Angle” Thursday that the suppression of his voice, which questioned much of Dr. Anthony Fauci’s guidance and the COVID-19 policies, ultimately harmed data, children and the American public.

He stated that open, “free and fair” conversations should have been allowed on social media during the pandemic to avoid the “harmfulness” of the lockdowns and the forced vaccination campaigns.

Bhattacharya also said he believes “very strongly” that the government had a hand in flagging his posts to Twitter for violating the company’s COVID-19 misinformation policy and said he and other doctors and scientists have filed a lawsuit against the Biden administration over social media censorship related to the pandemic.