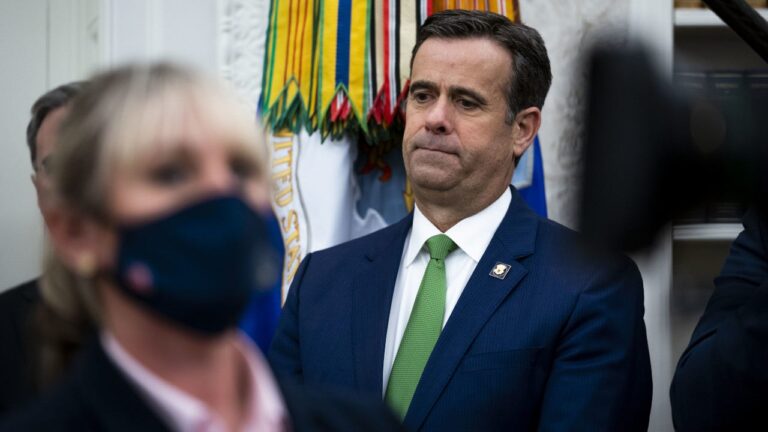 Former Director of National Intelligence John Ratcliffe claimed vindication for the Trump administration Friday after the latest Twitter Files revelations showed how Twitter’s standards had eroded in the weeks leading up to the 2020 presidential election.

“What I said as the DNI in October 2020 was proven true,” Ratcliffe tweeted Friday. “The IC had zero intelligence supporting a false narrative that the Biden laptop was Russian disinformation. Nobody in the IC had authority to say otherwise.”

The nation’s former top intelligence official shared part of Substack journalist Matt Taibbi’s latest thread on the Twitter Files, which confirmed that Twitter head of safety Yoel Roth had met with the FBI, Department of Homeland Security and Office of the Director of National Intelligence and had discussions about the Hunter Biden laptop story.

Taibbi and a handful of other independent reporters have been given exclusive access to internal documents and communications from Twitter. Encouraged by CEO Elon Musk, they have shared how Twitter worked to suppress the New York Post’s Hunter Biden reporting under disingenuous pretenses, suppressed the visibility of right-leaning users and violated the company’s own policies while working in conjunction with federal agencies.

After the New York Post revealed that Hunter Biden’s laptop contained evidence that he had leveraged his father’s position as vice president to make business deals with foreign associates, Twitter suppressed the story and even limited the ability of users to share it in direct messages, claiming that it violated rules against posting “hacked materials.”

The Twitter Files have shown that the company’s purported reasons for censoring the story were bogus, but the national press at the time dismissed the story as “unsubstantiated.” Their assertions were supported by a group of more than 50 former intelligence officials, including five former CIA directors or acting directors, who signed a letter claiming that the reported materials from Hunter Biden’s laptop appeared to be “Russian disinformation.”

In October 2020, Ratcliffe forcefully spoke out against that claim.

“Hunter Biden’s laptop is not part of some Russian disinformation campaign,” he told Fox Business. “Let me be clear: The intelligence community doesn’t believe that, because there is no intelligence that supports that.”

The emails reported by the New York Post revealed that Hunter Biden had introduced the then-vice president Joe Biden to a top executive at Ukrainian natural gas firm Burisma Holdings less than a year before he pressured government officials in Ukraine to fire prosecutor Viktor Shokin, who was investigating the company.

The Post report revealed that Biden, at his son’s request, had met with Vadym Pozharskyi in April 2015 in Washington, D.C.

The meeting was mentioned in an email of appreciation, according to the Post, that Pozharskyi sent to Hunter Biden on April 17, 2015 — a year after Hunter had taken on his lucrative position on the board of Burisma.

Biden has repeatedly denied any involvement with his son’s business dealings, and the White House has characterized allegations of corruption as debunked conspiracy theories.

There is no evidence from the Twitter Files that the federal government had a hand in suppression of the Hunter Biden story. However, the fact that Twitter executives had met with DNI officials indicates that Twitter was aware that there was no actual U.S. intelligence that suggested the content from Hunter Biden’s purported laptop was “Russian disinformation.” The company declined to share that information with the press before the election.