The five-year engineering feat Germany pulled off in months 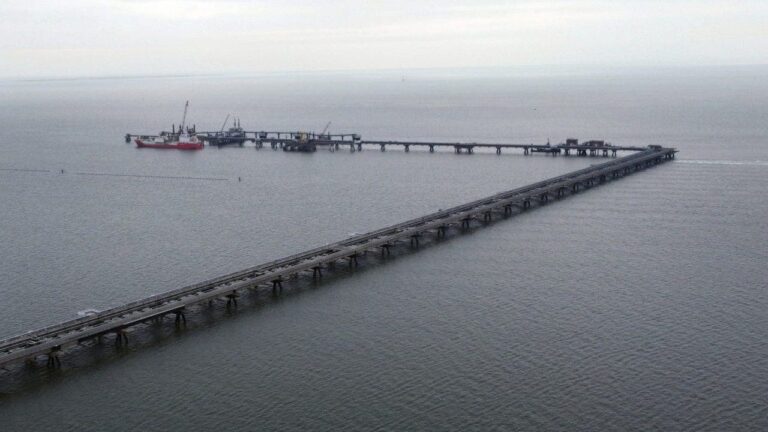 At the headquarters of the company asked to build the pipeline portion, technical director Thomas Hüwener posed that question to his team. “If no, then it’s a no,” he told them. “If yes, then we have to commit, with all the possible consequences for our company.”

After three days deliberations, the company concluded that if everything went perfectly the project could be done by Christmas. Since then, it has had to contend with potentially toxic soil and environmental regulations protecting frogs and bats. When workers encountered high groundwater, they had to drain trenches, then backfill them.

Another company building a jetty for the floating terminal needed to scan the seabed for unexploded World War II-era munitions and scour construction sites across Europe for supplies.

Cut off from most Russian natural gas, much of Europe is rushing to line up alternative energy sources and build the infrastructure needed for them. If the continent fails to shore up its energy grid, governments might have to resort to rationing fuel this winter, possibly leading to closed factories and more pain for manufacturers. Next winter could be even tougher if gas storage facilities aren’t replenished. The EU has estimated that ending its reliance on Russian fossil fuels will add at least 300 billion euros, or around $315 billion, in infrastructure costs, through 2030.

Since Russia stopped most natural gas exports to Europe this fall, gas flows from Russia to Germany have shriveled from 55% of imports last year to zero. The three German liquefied natural gas terminals slated for completion for this year could cover at least 15% of the country’s gas demand. Berlin plans to install several more terminals next year and is working on more permanent installations. It has budgeted more than €6.5 billion for such terminals in 2022.

Dozens of liquefied natural gas, or LNG, facilities are slated for construction across the European Union in coming years, which would allow Europe to buy more gas from nations such as Qatar and the U.S.

Within days of taking on the job of building a 19-mile pipeline between the new Wilhelmshaven terminal and the natural gas grid, Mr. Kissing’s employer, pipeline builder Open Grid Europe GmbH, formed a team with specialists in everything from route planning and nature conservation to archaeology and law.

Cooling natural gas to minus 260 degrees Fahrenheit turns it into a liquid that can be shipped in oceangoing tankers to terminals, where it can be converted back to gas. A floating LNG terminal is a gas facility on an enormous specialized tanker that receives liquid gas from another tanker and returns it to a gaseous state.

The jetty that will be home to the floating Wilhelmshaven terminal is an especially complicated project because it has to withstand the force of two large, gas-filled ships pressing against it. For Niedersachsen Ports GmbH & Co. KG, which is building the jetty, the first challenge was finding materials—quickly. Ordering them from a factory would have taken months. Mathias Lüdicke, the company’s Wilhelmshaven branch manager, said the company had to scour Europe for construction materials, including the steel piles that would be driven into the seabed.

Niedersachsen Ports called suppliers in France, the Netherlands, Finland and the Baltics. It found 165-foot steel piles on an idle construction site in Lithuania. The original plan had called for smaller ones, so the company adjusted the blueprint.

To save time, much of the 3,000 cubic meters of concrete needed for the project was brought in the form of huge, semifinished blocks, which were assembled like Lego pieces.

“We needed stuff that’s ready,” Mr. Lüdicke said. “So we changed the whole planning process as we went along, based on what was available.”

Niedersachsen Ports idled other projects to focus on the job. Employees worked through Easter weekend to get the necessary documents ready. “Nobody paid attention to overtime because we all said, this has to work,” Mr. Lüdicke said.

The German bureaucracy made adjustments, too. The parliament passed an LNG Acceleration Act, speeding up procedures for reviewing, approving and awarding contracts for LNG projects.

“If there is a chance in this really terrible situation, it is that we shake off all this sleepiness and, in some cases, grouchiness that exists in Germany,” Economy Minister Robert Habeck said in March about speeding up the construction of LNG terminals.

Other large construction projects have moved slowly in Germany. In 2020, Berlin opened its new airport nine years behind schedule. Stuttgart’s new railway station, under construction since 2010, is now scheduled to open in 2025, after years of delays and ballooning costs.

The state of Niedersachsen issued some of the necessary permits for the LNG terminal on May 1, the International Workers’ Day, a Sunday. “It’s not a day when you’d expect that to happen,” said Olaf Lies, the state’s economy minister. “We needed a new German speed.”

Similar projects elsewhere in Europe have faced opposition from activists who are against building new fossil-fuel infrastructure, and those who say such projects harm the local environment.

In Italy, a floating LNG terminal in the Tuscan port of Piombino is supposed to go into service next May. But several local groups have staged protests, claiming the project poses risks for residents and the environment. Italian Prime Minister Giorgia Meloni has said anchoring the new vessel in Piombino is vital for Italy’s economy and for national security.

In Germany, the new pipeline would cross the path of an annual migration of frogs. To keep the creatures from plunging into a ditch in which the pipe would be buried, Mr. Kissing’s team erected frog fences. In some cases, experts had to create new caves for bats.

When they started digging, they discovered another problem. The soil in the region contains high concentrations of sulfate acid, which could become toxic under some circumstances if exposed to oxygen for too long.

Also, the groundwater level was high. The trenches had to be dry to weld the pipes together.

To solve both problems, Mr. Kissing’s 800 workers worked in 400-foot increments, draining the trenches with pumps, then backfilling them.

“You may rush as much as you want, but soil is soil,” Mr. Kissing said while walking around the site on a recent rainy morning.

The groundwater also contained more iron than the norm. So the company had to build special de-ironing facilities to filter the water before dumping it back into nearby fields.

Connecting the new pipeline to the German gas grid presented another problem. It needs to link to an existing pipeline carrying gas from Norway, which has become essential for Germany and can’t be shut down for the linkup work to occur in the coming days. A bypass device had to be built to keep the gas flowing.

Before it could start building the jetty, Niedersachsen Ports first needed to search for unexploded World War II ordnance. Wilhelmshaven, Germany’s only deep-water port, was bombed heavily during the war. The company scanned the seabed and removed some smaller ordnance.

In September, with four months to go before the deadline, a problem cropped up that threatened to make it impossible to finish on time. The Wilhelmshaven sea lock—a structure in the port used for raising and lowering boats passing between stretches of water—had a mechanical failure, prompting the port to shut down the passage. The piles needed for the jetty, which were being welded together at the harbor, were stuck there.

Mr. Lüdicke met with officials from the waterway authority and German navy and devised a workaround. The port would allow the ships carrying the piles to pass through the lock with just one gate open, but only when the tides were such that the water levels were equal.

“It was a very fine balancing act, a lot of coordination,” Mr. Lüdicke said. “If we hadn’t managed to do that, we wouldn’t have been able to launch the terminal this year.”

In September, explosions damaged the Nord Stream pipelines running under the Baltic Sea a few hundred miles east of Wilhelmshaven, in what European authorities have called an act of sabotage. That sparked concerns across Europe about the vulnerability of energy infrastructure. The local police dispatched officers along the route of the new pipeline, and boats patrolled around the jetty.

Mr. Lüdicke is hoping for good weather as his team races toward the finish line. Bad weather could force delays, and heavy wind routinely halts work. There is still work to be done and tests to be carried out before the floating terminal, the 965-foot Hoegh Esperanza, can dock in Wilhelmshaven in the coming days and the gas can start flowing.

Utility Uniper SE, which the German state recently agreed to nationalize and which will operate the terminal, said that if all goes according to plan, the first tanker carrying LNG will arrive at the start of next year.

“If we have extreme weather, that could cause problems and delay things,” Mr. Lüdicke said. “We’re so close.”

Margherita Stancati contributed to this article.