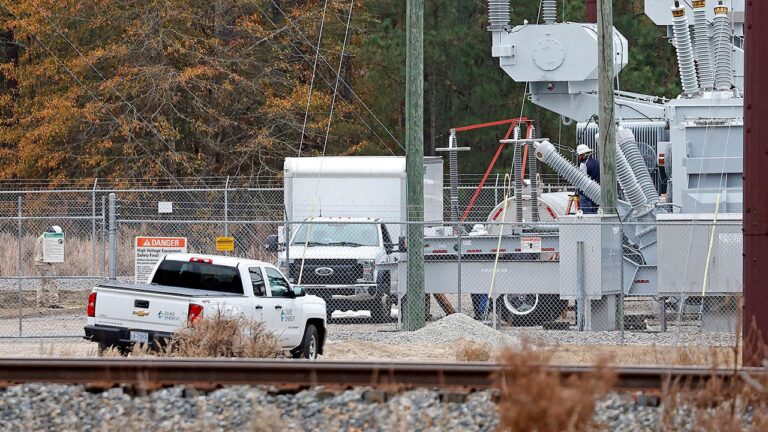 After unknown bad actors attacked a pair of power stations in North Carolina and left thousands in the dark for days, new reports are surfacing that similar facilities around the country have been attacked recently, highlighting the vulnerability of U.S. critical infrastructure and the electrical grid.

Damage caused by gunfire at two electrical substations in Moore County, North Carolina, on Saturday caused massive power outages in the region – leaving 45,000 residents without power at the peak of the outages as temperatures dipped to near freezing at night. Schools were forced to close, traffic control systems were knocked offline and the lack of electricity impacted the ability of area businesses to operate.

As of Thursday, power has been restored in the area as the investigation continues. The FBI, the Energy Department, Homeland Security, and other federal, state and local authorities are leading the probe. Moore County Sheriff Ronnie Fields suggested Monday that whoever orchestrated the attack “knew exactly what they were doing to cause the damage and cause the outage that they did.”

The FBI is seeking information regarding the North Carolina substation attacks.

Law enforcement agencies including the FBI are also investigating reports of shots fired on Wednesday near a power station in Kershaw County, South Carolina. A spokesperson for Duke Energy, the electrical utility for the region, said in a statement to Fox News Digital that no individuals were harmed in the incident, which didn’t result in any power outages or property damage.

In November, five electric substations in Pacific Northwest were attacked and federal, state and local agencies are investigating those incidents. A substation in Clackamas County, Oregon, was damaged in a “deliberate physical attack” on the morning of Thanksgiving. Two substations in southwestern Washington’s Cowlitz County were vandalized in mid-November, while another two substations in the Puget Sound area were attacked in late November.

In February, the Justice Department secured guilty pleas from three men accused of plotting to damage substations across the country with powerful rifles. The FBI said the defendants were White supremacists and expected the damage would cost the government millions of dollars, lead to power being out for months and evoke civil unrest and potentially a race war prompting the next Great Depression.

Concerns about the physical security of electrical infrastructure rose nearly a decade ago following a 2013 attack on a substation in Metcalf, California. Gunmen fired on 17 transformers causing over $15 million in damage, although the utility company was able to avoid power outages by rerouting power through other stations. The Metcalf attack prompted greater scrutiny of the U.S. power grid’s security.

The Wall Street Journal reported in 2014 that an analysis by the Federal Energy Regulatory Commission (FERC) the prior year found the loss of nine specific generators or substations at the interconnections of the three large electric grids in the U.S. could result in a widespread blackout.

FERC approved new standards in 2014 requiring certain electrical transmission owners “to address physical security risks and vulnerabilities” to ensure the reliability of the power grid through risk assessments of critical facilities, evaluations of potential threats and vulnerabilities, and the implementation of security plans.

A 2015 report by the Congressional Research Service (CRS) on the subject explained that the U.S. power grid features over 200,000 miles of high-voltage transmission lines and hundreds of large transformer substations. High-voltage (HV) transformers are less than 3% of all U.S. transformers but carry between 60% and 70% of America’s electricity – making them a vital piece of the nation’s electric grid and especially vulnerable.

The CRS report noted: “There is widespread agreement among government agencies, utilities, and manufacturers that HV transformers in the United States are vulnerable to terrorist attack, and that such an attack could have catastrophic consequences. But the most serious, multi-transformer attacks could require acquiring operational information and a certain level of sophistication on the part of potential attackers.”