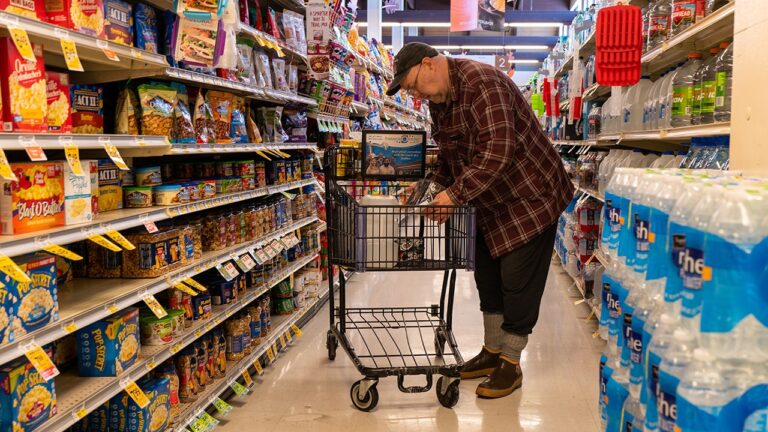 More than two-thirds of Americans are having a hard time affording groceries as food costs continue to soar, according to new data.

Retail technology platform Swiftly reported Wednesday that 69% of shoppers say they are struggling to pay their grocery bills after months of persistently sky-high inflation, and 83% currently rely on some form of coupons or loyalty program to put food on the table, according to its True Cost of a Grocery Shop survey.

The study also pointed to shifts in consumer behavior. Some 74% of those surveyed said they had changed their grocery shopping habits in the last year, and 33% said they are now shopping in-store more than in years past.

INFLATION IS AMERICA’S ‘NO. 1’ PROBLEM AND COULD TAKE UNTIL 2025 TO RESOLVE: NY FED PRESIDENT

The average cost of everyday essentials is elevated across the board this year, but the cost of groceries is even higher.

The Labor Department’s latest consumer price index – which tracks the prices of a bevy of goods including gasoline, grocery, and rents – showed prices rose an average of 7.7% on an annual basis in October, hovering near a four-decade high. But the cost of food at home soared 12.4% over the same month a year ago.

INFLATION SLOWDOWN? NOT IN SOME CITIES, WHERE CONSUMER PRICES STILL TOP 12%

Swiftly’s analysis determined “food costs are becoming too expensive for the average American and are only increasing due to record inflation and ongoing economic challenges,” adding, “Simply put, food costs are too high.”