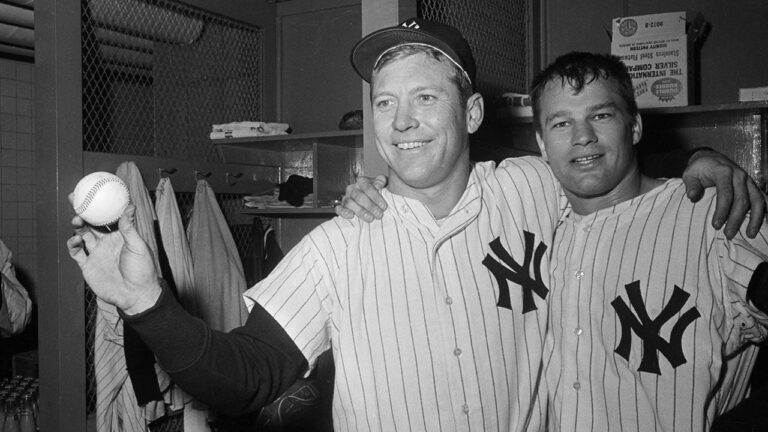 Mickey Mantle, the late great New York Yankees legend who won seven World Series titles and three MVP awards with the organization, is having a great year when it comes to his memorabilia.

On Saturday, the bidding for Mantle’s signed and handwritten “lewd” Yankees questionnaire ended. One of the most historical pieces in the Mantle collection sold for $242,788.80, according to Lelands auction house.

The questionnaire asked Mantle what his “most outstanding” experience at Yankee Stadium. The second question asked for as much detail as possible. The questionnaire was sent by then-Yankees public relations director Bob Fishel as he was trying to celebrate the team’s 50th anniversary of Yankee Stadium. The responses were supposed to be featured in a 50th anniversary yearbook.

“I got (oral sex) under the right field bleachers by the Yankees bull pen,” he wrote. “It was about the third or fourth inning. I had a pulled groin and couldn’t f— at the time. She was a very nice girl.”

Former Yankees executive Marty Appel shared his own firsthand knowledge of the letter with Lelands.

“Mickey Mantle’s talents on the baseball field are well documented. Much less known, however, are his literary skills, particularly when it comes to off-color narrative prose,” Appel said. “Offered here is his greatest contribution to that genre, his magnus opus if you will.

“This is the most famous, or perhaps we should say infamous, Mantle handwritten document in the hobby, although saying ‘in the hobby’ is somewhat of a misnomer because this is the first time it has ever been made available for sale, publicly or privately. It has, however, been viewed by many collectors because copies of it exist and have been posted (and then reposted) online and through various social media platforms. That familiarity has led to its now iconic status but, like the Mona Lisa, or any other great work of art, there is only one original, and this is it.”

Mantle, of course, is widely regarded as one of the greatest sluggers in the history of baseball – the seven-time World Series champion belted 536 homers in his career, hitting .298 with a .977 OPS. Mantle won three MVPs and was a top-five finisher nine times.