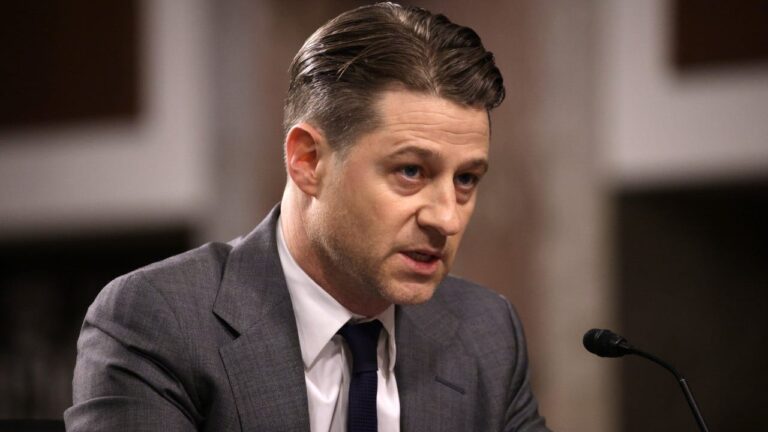 Outspoken cryptocurrency critic and actor Ben McKenzie Schenkkan told Senate lawmakers the digital currency industry is a massive “Ponzi scheme” and a “fraud” Wednesday during a hearing on the collapse of FTX.

Schenkkan, who has starred in roles for “The O.C.,” “Southland” and “Gotham,” appeared as an expert witness on a panel before the Senate Banking, Housing, and Urban Affairs Committee. He holds an undergraduate economics degree and has previously partnered with journalist Jacob Silverman to criticize other celebrities who have endorsed cryptocurrencies, accusing them of “shilling” and contributing to a “moral disaster.”

Committee members are probing how cryptocurrency should be regulated in the wake of crypto exchange FTX’s bankruptcy and the criminal charges filed against its founder, Sam Bankman-Fried. Schenkkan compared Bankman-Fried to infamous financial fraudster Bernie Madoff, noting that Madoff ripped off about 37,000 clients. FTX claimed a customer base that is 32 times larger in the U.S. alone, he said.

“According to FTX, some 1.2 million retail traders, a.k.a. regular folks, and five million worldwide, have lost access to the money they entrusted to FTX. It is unclear when, if ever, they will get any of that money back,” Schenkkan said.

Referring to FTX customers as “investors,” he said the estimated 40 million Americans who have invested in cryptocurrency “have been sold a bill of goods.”

“They have been lied to in ways both big and small, by a once seemingly mighty crypto industry whose entire existence in fact depends on misinformation, hype, and yes, fraud,” Schenkkan asserted.

“Cryptocurrencies are not currencies by any reasonable economic definition,” he continued. “Even anyone with even an undergraduate degree in economics such as myself can tell you that money serves three functions. Medium of change, unit of account and store value. Cryptocurrencies cannot do any of the three well, and they have no hope of ever doing so.”

The actor told lawmakers that digital currency assets are more akin to investment securities and disputed their value as such. He said crypto adds “no overall value to our economy or any other” and compared buying and selling digital coins to gambling.

“In my opinion, the cryptocurrency industry represents the largest Ponzi scheme in history. In fact, by the time the dust settles, crypto may well represent a fraud at least 10 times bigger than Madoff. The fact that it has roped in tens of millions of Americans from all walks of life, as well as hundreds of millions of people worldwide, should be of concern to us all,” Schenkkan said.

The hearing, titled, “Crypto Crash: Why the FTX Bubble Burst and the Harm to Consumers,” also featured testimony from investor and “Shark Tank” panelist Kevin O’Leary, who invested nearly $15 million in FTX; Professor Hilary Allen of American University College of Law; and Jennifer Shulp, director of financial regulation studies at the libertarian Cato Institute’s Center for Monetary and Financial Alternatives

Lawmakers on both sides of the aisle appeared ready to crack down on the cryptocurrency industry with new regulations, but there was disagreement on the value of the technology. Republicans, generally, said blockchain technologies hold incredible promise and wanted to prosecute fraud without banning the technology. Democrats expressed far more skepticism over cryptocurrency and questioned the value of digital assets in the first place.