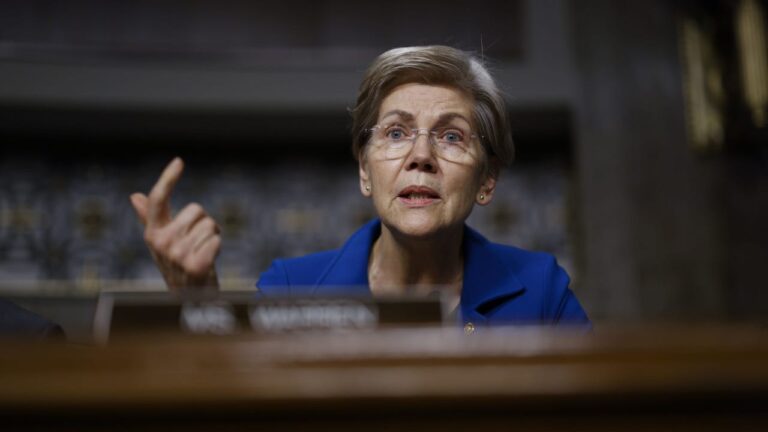 FTX paid spokesman and multimillionaire investor Kevin O’Leary defended cryptocurrency from skeptical lawmakers at a Senate Banking Committee hearing Wednesday, at one point getting into a back-and-forth with Massachusetts Democratic Sen. Elizabeth Warren over regulations to prevent money laundering.

Warren, a Wall Street hawk and fierce critic of digital currencies, has introduced a bill to crack down on money laundering and financing of terrorist organizations through cryptocurrency.

At Wednesday’s hearing, she pressed O’Leary on whether the crypto industry should continue to be unregulated compared to other banks and financial services providers.

“Mr. O’Leary, I know that you are a big supporter of crypto even after you lost $10 million in FTX’s collapse. But you are an experienced investor,” Warren said. “So, let me ask you, do you believe that the potential benefits of crypto are so promising that we should accept weaker anti-money laundering rules and weaker compliance from crypto firms than we require from banks, from brokers and from Western Union?”

O’Leary, who said earlier in the hearing that he believes cryptocurrency should be regulated, disputed Warren’s contention that digital assets enable money laundering at a greater scale than real-world currencies.

“No, I think we should apply the same regulatory structure that we apply to existing trading of stocks and bonds on exchanges tied to broker dealers. That is not complicated. It’s already been implemented in other countries,” O’Leary told Warren.

“And so, and I take issue, Senator, with your concept that it makes it easier to do money laundering. Currencies have been used for drug trafficking schemes since the ’60s and the American dollar when it was thrown out of a Piper aircraft in a duffel bag. The American dollar is also used by bad actors all the time.”

He wanted to continue, but Warren cut him off.

“I appreciate your point that everyone tries to engage in money laundering,” she said. “That’s what terrorists do. That’s what drug company, uh, drug dealers do. And that’s what states like Iran and North Korea have done.

“The only point I’m trying to make is, should the same rules against money laundering apply to crypto in the way that they apply to banks, to stockbrokers, to credit card companies, to Western Union? And, I think your answer to that is yes, right?” she asked.

“No!” O’Leary exclaimed. “It’s not yes. I’m just saying if you know your client rules on both sides of the transaction and use a crypto, such as USDC, that is regulated, you solve this problem, Senator, overnight.”

Warren said she appreciated O’Leary’s position that crypto should be regulated like stocks or bonds before advocating for her own bill to regulate digital assets. The Massachusetts Democrat has put forward bipartisan legislation with Sen. Roger Marshall, R-Kan., that would expand the Bank Secrecy Act to cover the cryptocurrency industry and apply know-your-customer rules to crypto participants such as wallet providers, miners, validators and others.

The bill would also ban financial institutions from using or transacting with digital asset mixers and technologies that hide the origins of funds.