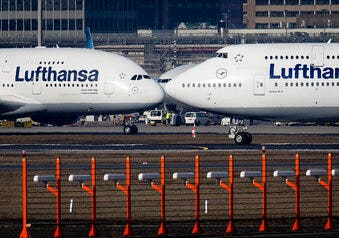 Lawmakers in the European Parliament announced Wednesday that they reached an agreement on changes to the EU’s carbon regulations for the commercial aviation sector that will raise airlines’ prices to address concerns about climate change.

Negotiators from EU countries and the European Parliament announced a deal early Wednesday on a plan that would change how airlines receive permits from the EU. Airlines that offer flights within Europe are already required to submit permits from the EU’s carbon market to cover the carbon dioxide emissions of their flights, but most of those permits are now granted for free.

Under the revised regulatory scheme, the number of free permits on offer for airlines would be cut by 25% in 2024 and 50% in 2025 — meaning that airlines operating in Europe will have to pay more to continue to offer the same level of service to air travelers in the years ahead.

LARRY KUDLOW: THE US AND EU WOULDN’T BE IN THIS ENERGY FIX IF THEY KEPT FOSSIL FUEL SPIGOTS OPEN

A smaller number of free CO2 permits will be available from 2024 to 2030 for airlines that use sustainable aviation fuels (SAF) to partially compensate them for the price difference between SAFs and kerosene-based aviation fuels, which are much cheaper.

The changes are initially set to apply only to flights within Europe. However, negotiators agreed to reassess in 2026 whether the United Nations’ plan to offset international flights’ carbon emissions to net zero by 2050 is on track. If the UN goal isn’t on track, the EU will consider broadening its aviation carbon regulations to cover all departing flights.

Suncana Glavak, a lawmaker from Croatia and the lead negotiator for the EU parliament in crafting the plan, said in a statement, “We stand with the sector through the process of the green transition.”

Airlines for Europe said in a statement to Fox Business that it is “extremely disappointed by the decision.” They said the timeline is “well before truly effective decarbonization solutions will be available at the scale needed for them to be effective.”

The trade group noted airlines’ cost of complying with the EU’s Emissions Trading Scheme (ETS) will likely have increased by a factor of five from 2012 to 2025, more than 5 billion Euros annually.

Transport & Environment, a green interest group, said the EU’s decision to omit international flights from the new rules means there will be “another decade of climate inaction because of EU governments’ cowardice,” according to the group’s aviation director Jo Dardenne.

“Average European families will continue to pay much more for their CO2 emissions than frequent long-haul flyers,” Dardenne added.

The EU’s plan will also require airlines to report other pollutants, including nitrogen oxides and soot particles, beginning in 2025. The EU is expected to propose adding those emissions to its carbon regulations in 2028.

Before the new regulatory scheme is finalized, EU countries and the bloc’s parliament must approve the law.