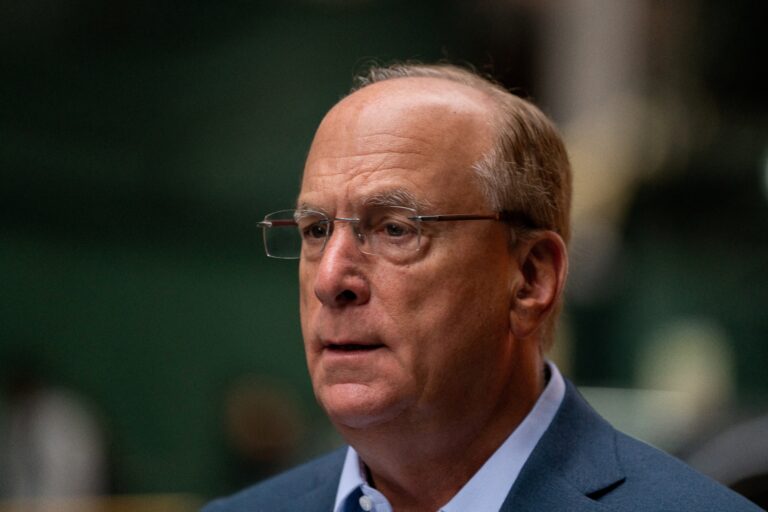 EXCLUSIVE: The treasurer of one of the largest state pension funds in the U.S. is urging BlackRock CEO Larry Fink to resign from the investment firm over its environment, social, and governance (ESG) policies.

North Carolina State Treasurer Dale Folwell sent a letter to BlackRock’s board of directors calling for Fink to step aside because the CEO’s “pursuit of a political agenda has gotten in the way of BlackRock’s same fiduciary duty” to its investors. “A focus on ESG is not a focus on returns and could potentially force us to violate our fiduciary duty,” Folwell wrote.

He noted that the North Carolina Retirement System (NCRS), which is valued at roughly $111 billion, has invested roughly $14 billion through BlackRock in a variety of active and passive funds, in addition to $55 million passively invested in BlackRock’s stocks and bonds. He wrote, “There is no blue money or red money at the treasurer’s office, only green. As the fiduciary for NCRS, I seek not to be political, but mathematical.”

BlackRock is currently the world’s largest asset manager with roughly $8 trillion under management and is one of several major financial institutions that have led the charge for the adoption of ESG standards in recent years. The ESG movement broadly seeks to promote a green energy transition and left-wing social priorities through the financial sector.

The ESG policies advanced by BlackRock have drawn the ire of some investors and state policymakers alike. Florida’s chief financial officer announced last week that the state’s treasury is taking action to remove about $2 billion in assets from BlackRock’s stewardship before the end of this year.

In October, Louisiana and Missouri announced they would reallocate state pension funds away from BlackRock, which amounted to roughly $1.3 billion in combined assets. The Texas legislature has also subpoenaed BlackRock for financial documents.

Amid its broad push for ESG, BlackRock’s stance against investing in fossil fuels has been a particular point of controversy for its detractors. Folwell noted in his letter that in 2020, Fink “used BlackRock’s clients’ votes against two management-supported board members of ExxonMobil because of ‘insignificant progress’ towards green energy. Yet, ExxonMobil stock rose 60% in the 12 months since the board member election because of an increase in demand for oil.”

“BlackRock needs to be totally focused on returns for their clients, not on the political effort to ‘transform’ the economy to you vision of carbon zero. Fossil fuels will be the engine that drives the world’s economy for the foreseeable future,” Folwell told the BlackRock board.

Over the last year, BlackRock has rolled out and later broadened a proxy voting program that allows certain groups of the firm’s clients to weigh in on investment decisions.

In his letter, Folwell informed BlackRock’s board that the NCRS will begin voting the shares it has under the management of BlackRock in an effort to counteract the investment giant’s ESG push, but said “the existence of the proxy voting program does not mitigate the need for a new direction at BlackRock.”

Folwell’s letter to the BlackRock board concluded that Fink must leave the firm for it to refocus on its fiduciary duty to investors: “Given his dogged pursuit of these political objectives over a number of years, I’m skeptical that he would or could lead the necessary course correction. Having lost confidence in his leadership to responsibly steward investors’ resources, I request, quite simply, that he resign or be removed from the asset management firm’s leadership team immediately.”

A BlackRock spokesperson provided a statement to Fox Business saying the firm values its relationship with the NCRS and is also “pleased NCRS is adopting our Voting Choice program so they can execute their proxy votes directly. Offering our clients choice is core to our mission.” The statement pushed back against campaigns suggesting the firm is “either ‘too progressive’ or ‘too conservative’ in how we manage our clients’ money. We are neither. We are a fiduciary. We put our clients’ interests first and deliver the investment choices and performance they need.”