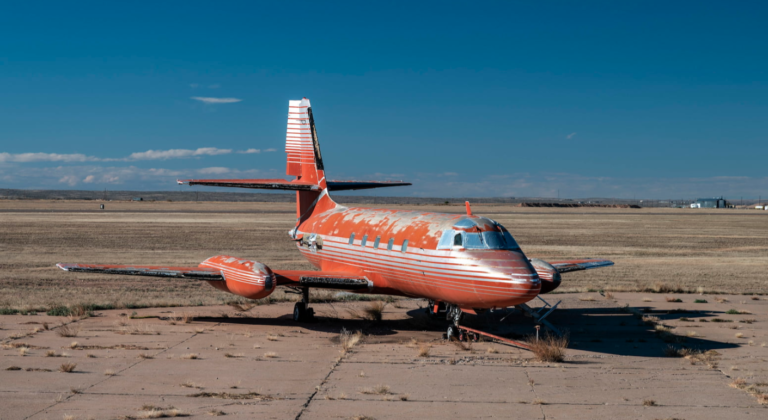 Elvis Presley fans can soon have a piece of the “King of Rock and Roll’s” luxurious lifestyle.

A private jet that previously belonged to Presley is hitting the auction block.

The 1962 Lockheed 1329 JetStar was purchased by the “Jailhouse Rock” singer in 1976, according to Mecum auctions, a year before his death.

The aircraft features a faded red exterior with silver accents, while the custom interior is decked out with red velvet seats, gold-plated accents and a red plush carpet.

The jet includes a Kenmore microwave, television with an RCA VCR player and a cassette player.

The interior cabin can seat up to nine passengers.

Presley’s jet has been stored at the Roswell International Air Center in New Mexico for decades. Its engines and many cockpit components have been removed.

The aircraft was one of several private jets owned by Presley. Two others – a Convair 880 jet and another JetStar – are on display at his home, Graceland, in Memphis.

Included with the jet is a copy of the aircraft security agreement document signed by Presley himself and the aircraft bill of sale documentation.

“For decades, Lockheed’s JetStar was the executive jet of choice for countless A-listers, recognized dignitaries and star-studded celebrities,” the listing noted.

“With a busy touring schedule, these crafts were needed to transport the singer, his TCB band, backup groups, Col. Tom Parker and the ever-present Memphis Mafia to venues, concerts and appearances all around the country. Elvis kept several pilots on retainer that were ready to fly him to adoring fans at a moment’s notice,” the site added.

The Mecum’s Kissimmee auction will take place in January 2023.

Correction: The original version of this story said the aircraft had a starting bid of $840,000. Presley purchased the jet in 1976 for that amount.