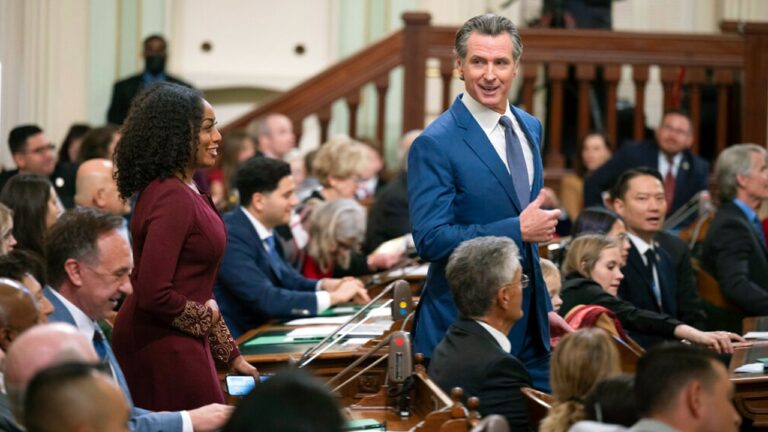 California Gov. Gavin Newsom has unveiled a plan to fine oil companies for making too much money and return those funds to the public.

The Democratic governor unveiled the plan alongside state Sen. Nancy Skinner during a special legislative session focused solely on the oil industry.

“California’s price gouging penalty is simple – either Big Oil reins in the profits and prices, or they’ll pay a penalty,” Newsom said in a statement. “Big oil has been lying and gouging Californians to line their own pockets long enough.”

Crucially, the proposal classifies the fine as a “civil penalty” and not a tax, meaning only a simple majority would be needed for passage, instead of the two-thirds majority that is required to raise taxes.

Still, the governor’s proposal was missing key details, including how much profit is too much for oil companies and what fine they would have to pay for exceeding it. Newsom’s office said those details would be sorted out later after negotiations with lawmakers. Any money from the fines would be returned to the public.

On Tuesday, the average gas price in California was $4.71 per gallon, above the national average of $3.38. That’s still well below California’s average levels of around $5.46 per gallon.

Gas prices are always higher in California because of taxes, fees, and environmental regulations that other states don’t have.

Speaking to reporters, Newsom said the goal of the penalty is to prevent gas prices from shooting up in the future, calling it “a proactive effort in order to change behavior.”

Oil industry representatives do not deny that energy firms have seen a surge in profits this year, but say market forces and government policies against fossil fuels are to blame.

WHAT THE OPEC+ OIL PRODUCTION CUT MEANS FOR GAS PRICES

“Nobody likes high gas prices. No one wants to hear about companies making a lot of money when things are tough, but it really comes back to the market,” Kevin Slagle, spokesperson for the Western States Petroleum Association, told FOX Business on Monday. “When there’s high demand, earnings are going to be higher. When there’s low demand, earnings are going to be lower.”

The California Legislature is in session most of the year, typically considering hundreds of bills. The governor can call lawmakers into a special session limited to discussing issues he specifies. Newsom said he called the special session on gas prices because it would help lawmakers focus on the issue.

But legislative leaders don’t appear in any hurry to pass the bill. Lawmakers convened in a special session for mere minutes Monday, long enough to adopt rules and appoint leaders. They won’t reconvene again until January.

FOX Business’ Breck Dumas and The Associated Press contributed to this report.