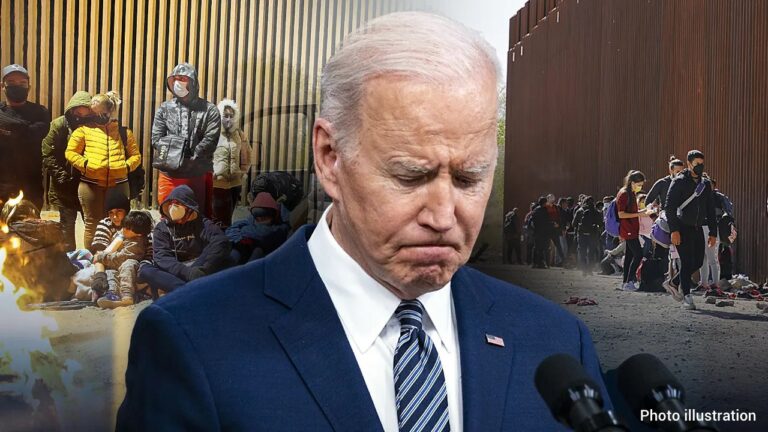 As massive migrant caravans continue to cross the U.S.-Mexico border, one national security expert signaled the border crisis will only get worse for Americans – and their pocketbooks – once the Biden administration drops Title 42.

“The numbers coming across are already being felt across the nation in your schools, health care system, crime, every sector of the American economy and our social fabric,” “Overrun” author Todd Bensman said on “Mornings with Maria” Monday. “Whether the president wants to admit it or not, Americans are going to feel this in the pocketbook for a long, long time, probably permanently.”

Customs and Border Protection (CBP) sources told Fox News that migrant numbers for FY 2023, which began in October, are at over 485,000 and are expected to hit the half a million mark this weekend. So far, 156,000 have been expelled under Title 42.

“The intelligence community is saying that when they drop Title 42 on December 21st, assuming that happens, that we’ll be looking at anywhere from 12,000 to 18,000 [crossings] a day,” Bensman told host Maria Bartiromo. “That’s just an absolute Category 5 hurricane we’ve never experienced before in the United States.”

Bensman continued that a “new army” will soon be needed to address migrant “gotaways” and related crimes. Thus far, the number of illegal immigrants who have crossed the border under President Biden’s watch is estimated to cost the U.S. taxpayer more than $20 billion each year, according to the Federation for American Immigration Reform.

“You’re going to need a new army to chase down and deport those with lawful removal orders on them. The current staffing levels of ICE [Enforcement and Removal Operations] is far below what is going to be necessary,” the national security expert argued.

The Biden administration’s proposals to grant protected status to some migrants is a “policy issue” that only encourages more illegal crossings on top of the potential repeal of Title 42.

“There’s a double-barreled shotgun aimed at the whole thing right now where you have Congress, a lame duck Congress, talking about amnesties and all of these new benefits,” Bensman said. “The entire world is watching every single word coming out of the lame-duck Congress right now. They are smart people making rational decisions about laying their $10,000 smuggling money down to enter the country, knowing that they’re going to get in with all these benefits.”

The Department of Homeland Security said repeatedly that it has a six-point plan in place to cope with what it accepts will be an immediate surge in numbers after Title 42’s end.

That plan includes an increase of resources and manpower, as well as greater use of alternative authorities such as expedited removal and punishments for illegal crossings. The administration has also emphasized its anti-smuggling campaigns and cooperation with Western Hemisphere countries.

“Wow,” the Twitter owner reacted to Fox News’ video of the mass crossing.

Bensman expressed that a bipartisan bill is needed to properly address the border security and migrant crises, but questioned whether Republicans and Democrats can come together on the issue.

“The president is deliberate in his decision not to visit the border. He recently was quoted saying, ‘That’s not a serious issue to me, that’s not a serious issue at all to the country,’” the national security expert said. “But the fact is, is that the numbers that are coming across are historic beyond anything in the American experience, and is transformational.”