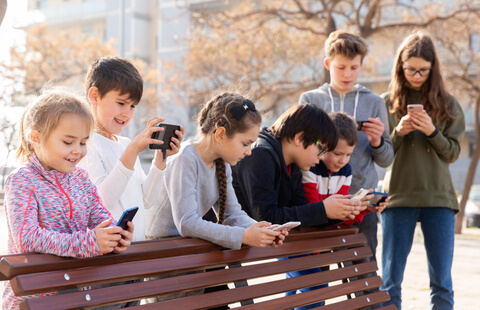 It’s no secret by now that excessive social media use has deleterious effects on users’ psychological and physical health. A growing mountain of evidence suggests, however, that these effects are particularly pronounced for minors, even as more and more young people flock to apps like TikTok and Instagram. Given the drastic implications of what can only be characterized as a generational social media addiction among American youth, it has become increasingly clear that lawmakers have a responsibility to act to curb youth access to these platforms.

A story from the Independent earlier this month captures just how serious the youth social media problem is. According to the report, the deaths of 20 children have now been linked to the “TikTok blackout challenge,” a viral trend that encourages kids to “choke themselves with household items until they become unconscious and film the adrenaline rush once they regain consciousness.” While such “challenges” have been around for decades, social media allows them to spread like wildfire and encourages kids to perform the stunts while alone, rather than with friends who can seek help in an emergency.

15 of the 20 children who have died so far were 12 years old or younger, highlighting just how young the demographics on many social media platforms are. 67 percent of U.S. teens are on TikTok, while 62 percent are on Instagram and 59 percent are on Snapchat. Despite TikTok having a minimum age of 12, 2.5 percent of the platform’s monthly users in the United States are reportedly between 0 and 11 years old – translating to roughly 2 million kids.

These kids aren’t just casually browsing social media for a few minutes a day. A Common Sense Media survey from March of this year found that tweens (ages 8 to 12) are online for an average of 5 hours and 33 minutes per day, while teens (ages 13 to 18) spend an astonishing 8 hours and 39 minutes per day online – and that doesn’t include screen time for school. Notably, those times are up nearly 20 percent from just a few years ago. According to a Pew Research study from August, one in five teens say they use YouTube “almost constantly,” while 16 percent say the same of TikTok and 15 percent say the same of Snapchat.

This shockingly high level of social media use has had a disastrous effect on both the physical and psychological health of American youth. While extreme cases such as deaths from trends like the “blackout challenge,” are thankfully rare, kids are still incentivized to perform dangerous stunts on camera to earn likes and shares, leading to countless injuries. Other trends like the “skull breaker challenge” and “Benadryl challenge” have left dozens of young people hospitalized. Additionally, researchers have linked excessive screen time to a sharp uptick in childhood obesity and lack of quality sleep.

Children today are also more depressed, anxious, lonely, and suicidal than at any point in history. While there are likely many factors contributing to this phenomenon, it’s impossible to ignore the correlation between the rise in youth mental health disorders and excessive social media use. Studies have shown that kids often become stressed out about the number of likes and positive responses to their posts, and are desperate to project a version of themselves online that masks what they view as their flaws and shortcomings.

Beyond the immense social pressure that social media places on kids, there’s also the fact that the internet is home to the most depraved individuals in the world, from sexual predators catfishing unsuspecting children to deranged mass murders who broadcast their gruesome crimes live on social media. These criminals now have direct access to every single child with a social media account. Explicit content, including child pornography, still litters sites like TikTok, Instagram, and Twitter. While parents can exercise a large degree of control over who kids spend their time with in person, it is virtually impossible to control who they connect with online and what kind of content they see.

Social media sites’ efforts to mitigate the harm their platforms have on kids are half-hearted at best. Instagram offers parental controls to limit screen time, but those restrictions require parents to be tech-savvy as well and are easily disabled. While social media companies all have minimum age requirements, usually 13, the “verification” process typically just asks a user to input their birthday upon signing up for an account. (Even at that, 13 seems incredibly young given the mature content that proliferates on social media sites.)

Since the most prolific social media users are kids, it’s easy to see why platforms aren’t genuinely interested in limiting young people’s usage. As Facebook whistleblower Frances Haugen revealed earlier this year, social media giants know how addictive their platforms are to kids, and are doing little to stop it. In fact, leaked documents from TikTok parent company ByteDance suggest that the platform’s algorithm was specifically designed to maximize retention and time spent on the platform by tweens and teens.

Undoubtedly, parents are primarily responsible for limiting their children’s access to social media sites and the internet in general. 95 percent of teenagers have smartphones, and it’s difficult to imagine that many of them pay for the device themselves. But elected officials also have a responsibility to support parents by passing legislation to curb youth social media use.

One initial step could be legislation compelling social media companies to verify users’ age, just like online alcohol retailers ask customers to upload a photo of their driver’s license. Given the severity of the problem, lawmakers should also seriously consider prohibiting social media use for minors. Just like the government prohibits the sale of tobacco and alcohol to people under 18 and 21, it also has an interest in protecting young people from the potentially harmful effects of social media use.

Such actions likely won’t eliminate all youth social media use, or perhaps even most of it. But legislation might save some kids from permanent developmental damage or self-inflicted wounds as a result of social media, and that in itself is a worthwhile reason to try. Regardless, it is clear that without swift action, an entire generation of Americans is at risk of suffering irreversible and completely avoidable harm.

Shane Harris is a writer and political consultant from Southwest Ohio. You can follow him on Twitter @Shane_Harris_.