World Cup Stage was set up for a Cristiano Ronaldo Hero Moment, but it never arrived | Republican Investor

World Cup Stage was set up for a Cristiano Ronaldo Hero Moment, but it never arrived 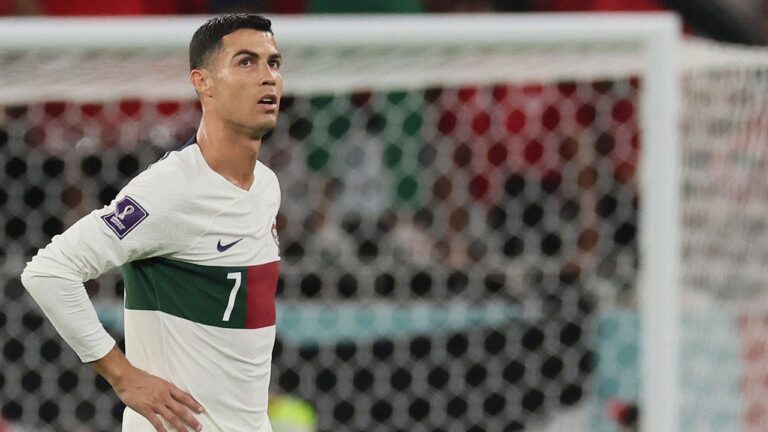 Cristiano Ronaldo was inconsolable. As perhaps the final whistle blew on his World Cup career, tears streamed down the superstar’s face.

Moroccan defender Achraf Dari tried to put his arm around Ronaldo as he slowly walked toward the tunnel and the locker room. But the 37-year-old Portuguese captain shooed away the 23-year-old and kept walking.

Once in the tunnel, shielded from the raucous Moroccan fans still cheering and celebrating, Ronaldo’s face crinkled, and he pinched the bridge of his nose. The tears kept coming. And the cameras caught them.

Ronaldo, one of the greatest to ever play the game, will likely never win its most coveted trophy.

Just as Neymar‘s dream of winning this World Cup for his home country ended Friday night, so too did Ronaldo’s on Saturday. Among the legends in this tournament, only Lionel Messi continues to have hope after a wild Argentina victory in penalty kicks the night before.

Saturday was historic for Morocco, which became the first African team to make the World Cup semifinals with a 1-0 victory over Portugal on Saturday at Al Thumama Stadium.

Even so, Ronaldo hovered over everything.

The game began with tense buildup. Moroccan fans outnumbered Portuguese fans by the thousands, and they whistled incessantly throughout the game — incredibly distracting sounds that were off the decibel charts.

After 42 minutes, the Atlas Lions scored. Left back Yahia Attiyat Allah lofted a perfect ball from the left side into the center of the box and Youssef En-Nesyri floated above goalkeeper Diogo Costa to tap the ball into the back of the net with his head.

Al Thumama was already deafening, and this moment blew out ear drums. En-Nesryri had just scored the first World Cup knockout round goal in Moroccan history. At that point, Ronaldo was nowhere to be found, as the global superstar did not start this match.

It was the second game in a row that manager Fernando Santos thought it wiser to put Ronaldo on the bench, a decision which received enormous attention leading into the game.

Tuesday’s win over Switzerland had been the first World Cup game that Ronaldo did not start for his national team since 2006. The initial decision was met with fierce criticism, but Portugal won 6-1 and Ronaldo’s replacement, 21-year-old rising star Gonçalo Ramos, scored a hat trick. Santos said after that game that benching Ronaldo was tactical and not personal.

So, Santos did the same thing against a disciplined and emotional Moroccan team that was striving to make history. Was it the wrong decision this time? Even a FIFA official speaking with his colleague walking down the stadium stairs after the match casually said, “I can’t believe he had Ronaldo on the bench.” His colleague’s response, “Yes, but Morocco deserves this.”

Did Santos regret not starting Ronaldo?

“No,” the manager said afterward. “I don’t think so. No regrets. No regrets. I think this was a team which played very well against Switzerland. Cristiano is a great player. He came in when we thought that was necessary. So, no, I have no regrets.”

For the past week, Ronaldo played the role of a good soldier. There were reports earlier this week that he threatened to leave the national team and Qatar after Santos benched him, but Santos later clarified those rumors were not true. And he doesn’t think that drama impacted the game.

“I think if we take two people that were the most upset about this game, perhaps it was Cristiano Ronaldo and myself,” Santos said. “Of course, we are upset. Of course, that affects us. But that’s part of the game.”

Ronaldo remained on the bench to start the second half. He walked down the tunnel after halftime still wearing his yellow substitution pinny, speaking with a team trainer and backup goalkeeper Rui Patricio with their hands covering their mouths, so people couldn’t read lips.

As soon as the half began, Ronaldo started warming up on the sideline. His eyes darted from Morocco taking a free kick on one end to the Atlas Lions fan base jumping up and down on the other. He took a deep breath and kept stretching.

In the 51st minute, he was substituted into the match and the stadium erupted — it was louder in that moment than during any other point of the night. Perhaps even the Moroccan fans cheered. This was their last moment to watch one of the greatest players of all time to play in a World Cup, even if he was on the other team.

And the stage was set for a saves-the-day hero moment.

It felt like, at least for a few minutes, Ronaldo’s on-field presence gave Portugal a jolt. Its attack became more intense and precise, and A Selacao had chances. At one point, Portugal had three straight corner kicks but couldn’t convert any of them.

Bruno Fernandes had a shot from the top of the box in the 64th minute that went slightly over the goal. The Portuguese midfielder later had a superb cross that goalkeeper Yassine Bounou caught before Ronaldo could head it past him. In the 83rd minute, Felix blasted a shot that would have gone in had Bounou not dived to save it.

Morocco sat back in the second half, stayed dangerous on the counter-attack, and Portugal couldn’t finish a single thing.

“Sometimes in football, we need to have a bit of luck and that was not the case,” Santos said. “In our last game, we had a magnificent goal on a corner, but that did not happen this time. Also, we saw in the additional time, we could see our players were anxious.

“The reason why we’re upset is because we thought we could reach the finals and win.”

Morocco tied Croatia in the group stage, then beat Belgium, Canada, Spain and now Portugal, all while conceding only one goal.

Up next for the team is either England or France, a semifinal scheduled for Wednesday that will provide must-watch theater (2 p.m. on FOX and the FOX Sports app).

We’re becoming the team everyone loves in this World Cup,” Moroccan manager Walid Regragui said. “I think we’re the ‘Rocky’ of this World Cup.”

Even so, Ronaldo and his tears stole the spotlight, one last time.

Regragui was asked afterward if he was worried when Ronaldo was subbed on in the second half.

“I know he can score out of nothing,” Regragui said.

This time though, he didn’t.