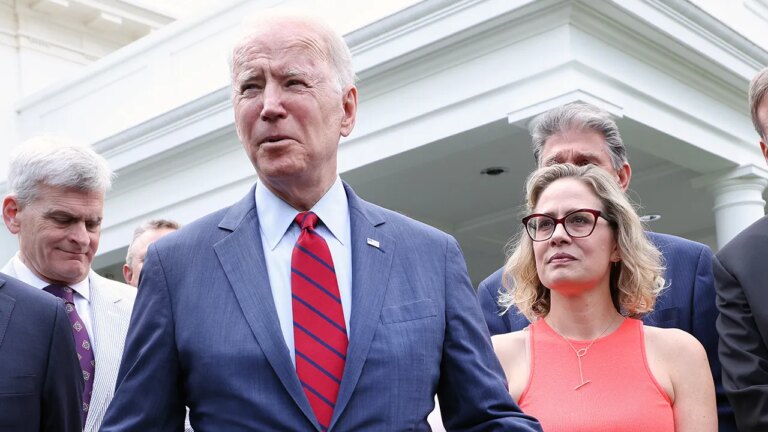 President Biden’s administration considers the Democratic majority in the U.S. Senate to be unchanged after Arizona Sen. Kyrsten Sinema announced that she was renouncing her Democratic Party affiliation.

Sinema, in a Friday op-ed in the Arizona Republic, cited increasingly partisan interests and radicalization of both political parties as the reason for her departure.

The White House released a statement later in the morning stating that it was unconcerned for the Democratic Party’s Senate majority and considers Sinema to be a strong ally.

“Senator Sinema has been a key partner on some of the historic legislation President Biden has championed over the last 20 months, from the American Rescue Plan to the Bipartisan Infrastructure Law, from the Inflation Reduction Act to the CHIPS and Science Act, from the PACT Act to the Gun Safety Act to the Respect for Marriage Act, and more,” White House Press Secretary Karine Jean-Pierre said in a statement.

Sinema has not stated whether she will continue caucusing with the Democrats, but sources have told Fox News that she will maintain her committee assignments via the Democratic Party.

Jean-Pierre continued, “We understand that her decision to register as an independent in Arizona does not change the new Democratic majority control of the Senate, and we have every reason to expect that we will continue to work successfully with her.”

Sinema claimed in her op-ed that she had decided to become an independent due to increasing radicalization on both sides of the aisle.

“Americans are told that we have only two choices — Democrat or Republican — and that we must subscribe wholesale to policy views the parties hold, views that have been pulled further and further toward the extremes,” Sinema wrote in her op-ed.

“Most Arizonans believe this is a false choice, and when I ran for the U.S. House and the Senate, I promised Arizonans something different,” she continued. “I pledged to be independent and work with anyone to achieve lasting results. I committed I would not demonize people I disagreed with, engage in name-calling, or get distracted by political drama.”

The senator has been the target of extensive intra-party mudslinging for not falling in line with the rest of her party on key issues, most notably refusing to abolish the filibuster.

“When politicians are more focused on denying the opposition party a victory than they are on improving Americans’ lives, the people who lose are everyday Americans,” Sinema wrote in the op-ed.