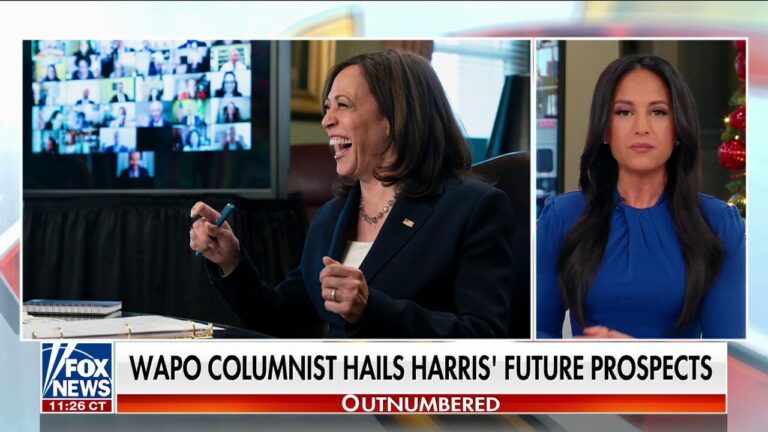 “Outnumbered” panelists ripped Robinson for painting the vice president as a “victim” despite holding one of the nation’s highest offices.

Robinson came to Harris’ defense Tuesday when he was asked about her viability as a 2024 candidate.

“If VP Harris is not having impact, it is mostly – perhaps entirely – because she is in the gilded prison known as the vice presidency. She is a much better and more effective politician than her current position allows her to demonstrate. … She will be a formidable contender for the Democratic presidential nomination,” Robinson said.

Compagno went on to explain that the office of the vice president is an honor and allows Harris to serve the American public in many ways, including her role as the border czar.

“She actually has a wide potential to show us exactly the kind of leader that she is, which I guess we have learned she is not,” Compagno said.

Todd Piro, co-host of “Fox & Friends First,” acknowledged that vice president is largely a “thankless” job. But as for Harris’ 2024 viability, Piro said Harris is regularly damaging her own chances.

FOX Business’ Kennedy agreed, adding that Harris was unable to “rise to the moment” when she ran for president in 2020.

“I would say actually as a communicator and a leader, she’s fared worse,” Kennedy explained, noting that Harris’ own “ineptitude” as a leader and communicator have been her downfall.

KAMALA HARRIS MOCKED FOR GUSHING OVER A ‘YELLOW SCHOOL BUS’: ‘THEY REALLY CAN’T LET HER TALK IN PUBLIC’

Harris Faulkner, co-host of “Outnumbered,” criticized Robinson’s entire characterization of Kamala Harris in her current position. Faulkner argued that Robinson reduced the vice president to a “victim” who can’t defend herself.

Compagno explained that Vice President Harris, despite her lackluster performance in office, has continually been propped up by liberal media with glowing coverage and cover features.

“And this latest explanation by the WaPo columnist is simply the cherry on top of a sycophantic, apologist media that refuses to see the reality, as my colleagues have articulated, of her utter incompetence and failure at any attempt at leadership,” Compagno said.

Amy Nelson is a producer with Fox News Digital.