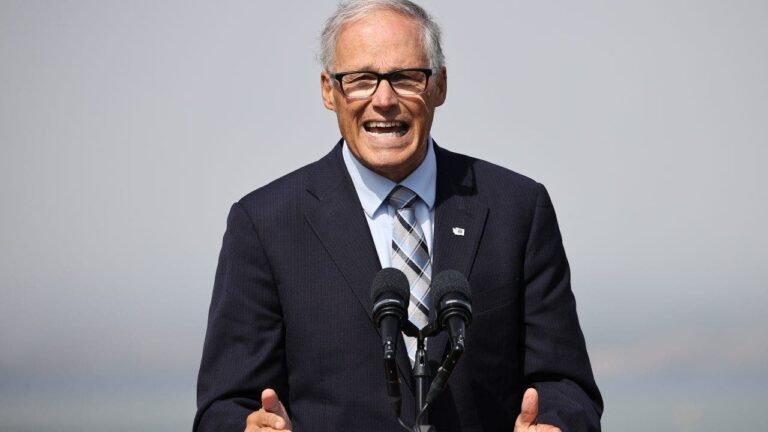 FIRST ON FOX: Democratic Washington Gov. Jay Inslee held a recent equity summit that included a governor-appointed state education agency telling other state agencies that concepts like “objectivity” and “individualism” are rooted in “White supremacy culture” and should be rejected in favor of “indigenous relational pedagogy.”

During Inslee’s “2022 Governor’s Equity Summit” in Tacoma on Nov. 30, the interim executive director of the state’s Professional Educator Standards Board (PESB), which consists of 12 governor-appointed members dedicated to advancing “educational justice,” gave a PowerPoint presentation titled “Internal Transformation: How an Education Agency is Transforming Itself in the Name of Justice.”

PESB’s presentation began with a “land acknowledgment” recognizing “the original inhabitants of the spaces we occupy,” and it asked Zoom viewers and in-person attendees to “please take a few seconds to acknowledge the land that you are on as the traditional homeland of the Indigenous Peoples.”

The land acknowledgment was followed by a “moment of silence” to consider how “this country has elevated a story of democracy and freedom while minimizing the impact of violence and oppression on marginalized communities, communities on whose backs this nation was built.”

The presentation then outlined some of the “cultural shifts” that PESB believes are “needed” in Washington state’s education department and other state agencies.

“What does it look like when we move away from white supremacy culture toward indigenous relational pedagogy? What can you do tomorrow?” one of the slides asked.

The slide listed multiple concepts that are supposedly rooted in “White Supremacy Culture,” drawing from Tema Okun’s 2020 article of the same name.

The racist concepts, according PESB’s presentation, included “Perfectionism,” “Worship of the written word,” “Individualism” and “Objectivity,” among multiple others, and the slide listed how those concepts can be replaced with “indigenous relational pedagogy.”

For instance, perfectionism is when “making a mistake is confused with being a mistake, doing wrong with being wrong,” according to the presentation. One way to remedy this, it said, is to “develop a learning organization, where it is expected that everyone will make mistakes and those mistakes offer opportunities for learning.”

The presentation argued that “worship of the written word” discriminates against certain people, because “those with strong documentation and writing skills are more highly valued, even in organizations where ability to relate to others is key to the mission.” It suggested that state agencies “work to recognize the contributions and skills that every person brings” to the table.

The presentation argued that individualism and the “desire for individual recognition and credit” creates a “lack of accountability, as the organization values those who can get things done on their own without needing supervision or guidance.” It suggested that state agencies “make people accountable as a group rather than as individuals.”

The presentation also dispelled the beliefs “that there is such a thing as being objective or ‘neutral,’” and that “emotions are inherently destructive, irrational, and should not play a role in decision-making or group process.”

“Recognize that we can know things emotionally and intuitively in ways that we may not be able to explain ‘rationally,’” it stated. “Understand that often ‘rational’ thinking is actually an emotional response couched in logic.”

Inslee gave the opening and closing remarks at the summit, stressing that the ideals put forth “have to get done” in order to achieve true equity.

“We don’t break centuries of habit and thinking, unless we decide to break the chains of that history,” Inslee said in-person during his opening speech at the summit. “And so that is why we’re here today, to really consciously, intentionally, bring equity and justice toward the way we do business.”

“I got a lot out of this just listening to people today,” Inslee later said in his closing remarks, which were delivered via Zoom. “The kinds of things that people talked about have to get done if we’re going to bend the arc of the universe here, and we identified what they are.”

In its initial inquiry to Inslee’s office, Fox News Digital included links to both the PESB presentation on Google Docs and the Google Drive document included in Slide 11 of the presentation, which are embedded in this report and are also publicly available online.

AIR FORCE ACADEMY DIVERSITY TRAINING TELLS CADETS TO USE WORDS THAT ‘INCLUDE ALL GENDERS,’ DROP ‘MOM AND DAD’

Inslee’s director of communications, Jaime Smith, said she had no knowledge of the presentation.

“I haven’t seen this presentation, only your email with cherry-picked random words and phrases from one presenter at one conference,” Smith wrote. “The legislature and governor created a state Office of Equity that supports state agencies with developing a pro-equity, anti-racist approach to community engagement and policy-making.”

“I have never heard anyone involved in this work make a blanket assertion that state employees shouldn’t have emotions or be objective,” she added.

Fox News Digital provided both links to the governor’s office again, as well as a third link to a Facebook photo posted by PESB showing its interim executive director, Erica Hernandez-Scott, receiving a “special recognition from the Office of Equity” for giving the presentation at the governor’s summit.

Inslee’s office did not respond to the second inquiry.

PESB did not respond to Fox News Digital’s request for comment.

Jessica Chasmar is a digital writer on the politics team for Fox News and Fox Business. Story tips can be sent to Jessica.Chasmar@fox.com.