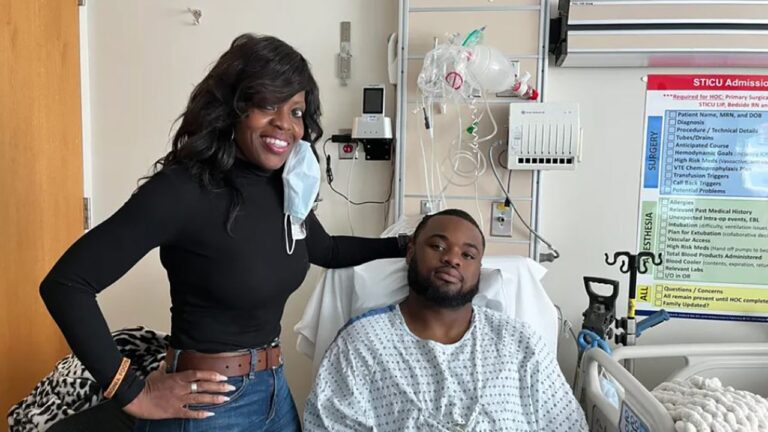 One of the two surviving victims of a University of Virginia shooting that left three football players dead said he is speaking out now while still recovering from being shot in the back himself for “my brothers I lost.”

Mike Hollins, also on the UVA football team, spoke to “Good Morning America” recounting what happened when fellow student, Christopher Darnell Jones Jr., opened fire on a charter bus at an on-campus parking garage behind the drama department on Nov. 13 while returning from a class field trip to Washington, D.C. to see a play.

“I knew in that moment that God had a hand on my life. It just felt so surreal knowing I’m in the middle of UVA campus, the place where I’ve felt really safe before,” Hollins told ABC host Michael Strahan.

Hollins said he was one of just two to initially made it off the bus, but he turned back for his teammates.

“Once I got up and the bus was stopping, was when the gunshots started ringing out, and in that moment, I knew that I, we had to get off that bus because it could get a lot worse. Me and another teammate were the only two to get off the bus, and I turned back, and I look over my shoulder and realize we’re the only two running,” Hollins recalled. “I didn’t really think much in that moment, it was just literally an instinct and a reaction to go back.”

“It was just so close, and I felt so hopeless and so powerless in that moment,” he added.

The shooting prompted a 12-hour manhunt and lockdown until Jones was arrested off campus.

“Did he say anything?” Strahan asked of the suspect.

“Nothing at all,” Hollins said. “I mean we locked eyes, and that was it. It was just a cold look. It was, I don’t know, it was just a numb look, and in that moment, I just dropped everything and took off running. I felt him hit me in my back, but I knew I wasn’t going down without a fight. And I found a pre-med student, and that was God again – she was there to help me, she kept me calm, kept my breathing under control, was checking my pulse, until the ambulance came.”

“What was his demeanor before you got on that bus?” Strahan asked.

“He was looking normal to me,” Hollins said.

Hollins said he didn’t find out until two days later that Perry, Chandler and Davis Jr. were killed.

“I’ve never cried like that before. I mean I lost a brother that day. I loved Lavel with all my heart. I loved Devin with all my heart. But DeSean, it was different with him. It was, man that was my brother. So it was tragic hearing that he was gone,” Hollins said. “Because I went straight to surgery. Because I think I got hit in the small intestine, kidney, and they were trying to see if it damaged by bladder. By the grace of God, it missed my spine by I think two centimeters or something like that.”

“I would just love to ask if he knew the magnitude of his action in the moment,” Hollins said of the accused shooter. “Like if he ever thought how many people would be affected for the rest of their lives.”

“I’ve never been as vulnerable or emotional, but now I don’t really care. I can’t control it. I’m not afraid to tell my friends or my teammates ‘I love you’,” Hollins added, describing how the shooting changed him. “You know, looking forward to seeing you again. And really meaning it now.”

“I’m doing it for my brothers I lost,” Hollins said of why he’s speaking out now. “I’m still doing it for the people I love. The people who were on that bus, and everything I do from here on will be in their name, in their light, and I just want to do as much as I can to keep their flame lit.”