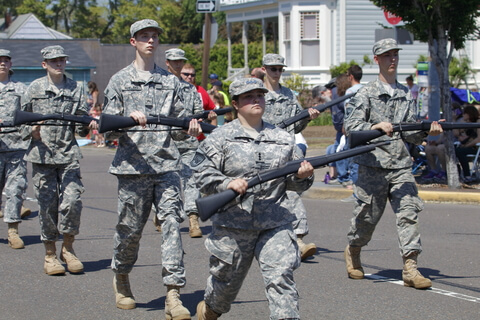 As the left wages its relentless campaign against seemingly every major American institution, it may have a new target in its sights: Junior Reserve Officers’ Training Corps (JROTC) programs.

For over a century, JROTC courses at American high schools and ROTC programs at American colleges have offered students instruction on leadership and community service while promoting military-style discipline, physical fitness, and other basic skills taught in boot camp. Although all five military branches operate JROTC programs, participants are not compelled to join the military after graduation. But they are nonetheless provided with information about the benefits of military service, along with lessons about U.S. history and civic culture designed to inspire patriotism – a troubling proposition to many on the left.

Some criticisms of the program were laid out in an article from the New York Times earlier this week that ostensibly focuses on concerns that JROTC has allegedly become mandatory at some U.S. high schools. This has raised fears that the program has now become tantamount to “indoctrination.”

In its report, the Times acknowledges that JROTC programs are seen by military leaders as an effective recruiting tool at a time when the armed forces are finding difficulty filling their ranks. The Army, for example, reports that 44 percent of enlistees in recent years came from schools that offered JROTC.

But it is also clear that JROTC enrollees benefit from the program whether they join the military or not. Many high-school principals report that it “motivates students who are struggling, teaches self-discipline to disruptive students,” and instills “a sense of camaraderie.” Not only has the program been welcomed in rural areas that tend to favor the military, it has also enjoyed success in urban schools “where educators want to divert students away from drugs or violence.” Several cadets interviewed by the Times reported that enrollment in the program had “helped them mature into better people” and encouraged them to “get better grades in all their classes.”

But here is where the program’s detractors, as indicated by the story’s subhead, “Public School Mandates Raise Fears of ‘Indoctrination,’” begin their attacks. Fifty years after a wave of protests against the program during the anti-Vietnam War era, as the Times report continues, “new conflicts are emerging” as some parents complain that their offspring “are being forced to put on military uniforms, obey a chain of command, and recite patriotic declarations in classes they never wanted to take.” One such parent protested that her daughter’s request to drop out of JROTC during her first year was initially refused, even though the girl “has no interest in a military career.”

Other unnamed critics of JROTC are said to have “long contended that the program’s militaristic discipline emphasizes obedience over independence and critical thinking,” while its textbooks are judged by the Times to sometimes “falsify or downplay the failings of the U.S. government.” One longtime campaigner against automatic JROTC enrollment in Chicago, now 33 years old, complained that the exhortation he’d received while in high school to “join the classes and enlist in the military” amounted to “brainwashing.” He expressed particular concern that “a lot of recruitment for these programs are [sic] happening in heavy communities of color.”

Service in the military has long offered a leg up in life for underprivileged young people, whether in poor urban slums or rural backwaters. Even an initial tour of enlistment can assist participants in acquiring the skills and habits needed to succeed in nonmilitary careers. Particularly in areas that are plagued by drugs, violence, and anti-academic attitudes, it would appear that JROTC constitutes a valuable initial form of training in that regard, whether or not its graduates choose to join the military.

But what about “critical thinking”? Anyone with even the slightest familiarity with today’s public-school curricula will recognize that term as code for the sort of anti-American attitude instilled through the widespread adoption of alternative histories like the Times’s 1619 Project, a highly biased, factually-challenged account of the nation’s history that teaches that America is irredeemably racist.

For all practical purposes, “critical thinking” for the left today means criticizing the United States and its principles and practices. Exemplars of that sort of thinking would be Colin Kaepernick and WNBA player Britney Griner (just released from a Russian prison thanks to a “swap” initiated by the U.S. government), who has knelt during the national anthem before games in protest against American racism and openly called for every American sports team to cease playing the anthem before games.

As Wall Street Journal columnist Barton Swaim recently observed, “the left-liberal outlook has triumphed across American culture,” including in corporate boardrooms, government agencies, the sports and entertainment worlds, “K-12 education bureaucracies,” higher education, and the media. It is therefore highly unlikely that any JROTC participant will have been sufficiently “brainwashed” as to be unaware of America’s (real and imagined) failings, thanks to the instruction he or she receives from other teachers, or from TV, movies, and social media.

As for “obedience,” the chaos that rages in many urban schools suggests that a lot of students could profit from a dose of self-discipline. Some public officials are finally starting to raise awareness around this issue, like Florida sheriff Wayne Ivey, who late last month observed that students are “not worried about getting in trouble” and are even becoming violent against teachers and staff. Ivey called for harsher punishments for those who commit violence in schools, eliciting wails of protest from some parents and even school committee members who claimed that such threats of accountability might “frighten” pupils.

America’s Founding Fathers, notably including Thomas Jefferson, George Washington, and Benjamin Rush, along with the astute French observer Alexis de Tocqueville, were deeply aware that free, republican institutions are not inherently self-sustaining, but require a thorough civic education that will instill in citizens both an understanding of how those institutions work (including such principles as limited government, federalism, and separation of powers) but also an appreciation of the principles of natural right on which the institutions are grounded. They require, as well, a justified pride in the country’s achievements, which are rivaled by few other nations.

Nowadays, even the American military, until recently one of the country’s most respected institutions, has suffered a decline in public estimation, according to recent polls. That decline may be due in part to anti-military attitudes instilled by the media and by college and pre-college education, along with (at the other extreme) the proliferation of “diversity, equity, and inclusion” programs in the military itself, thanks to commands from our current political leadership. Notwithstanding the current state of affairs, the military remains vital not only to the defense of this country’s freedom and that of other nations with which our interests are linked, but also to instilling such virtues as courage, good judgment, patriotism, justice, and habits of good order in the citizenry who serve in it.

Even the evidence provided in the Times account suggests that JROTC is a worthy ancillary as a means of enhancing young Americans’ civic and moral education, as well as encouraging well-qualified individuals to enter the military upon graduation. While participation in it, beyond an initial ninth-grade introduction, should not be required, it is certainly a program to be encouraged.

David Lewis Schaefer is a Professor of Political Science at College of the Holy Cross.