The Kids Aren’t Alright—Let’s Fix That 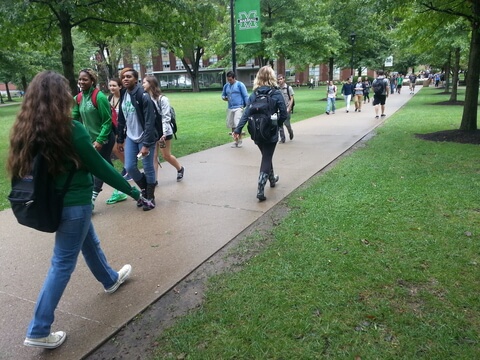 A bumper sticker I’ve often seen in left-wing neighborhoods bears the legend, “So! How Are the Children?” It’s the kind of obnoxious question that is usually deployed to guilt their neighbors into voting for yet more money for the public schools, often to buy more computer technology. After decades of very high levels of spending, however, I think we can safely answer, “They aren’t doing very well—and it has little to do with levels of education spending or a lack of technology.”

The problems in American education have little to do with money and a lot to do with the decisions of bureaucrats and teachers themselves. Even universities that emphasize a rigorous education are discovering that they have a lot of work to do to get students up to speed.

This fall semester begins my twentieth year of teaching college students, and I’ve had conversations with a lot of colleagues from different fields and different universities. Almost everybody agrees that student readiness for college has been decreasing for a while, but the newest students on campus have many more deficits than previous years. This has many causes. One for the class of 2026 likely has to do with the catastrophically damaging response to Covid-19 on the part of public health and education authorities.

In fact, a Stanford University study of adolescent brains released this month shows that the brain structures of today’s adolescents have prematurely aged—not matured—in comparison to the brains of adolescents previous to the pandemic. The study takes it that these changes are due to “the stress of the pandemic,” stress which most people understand had little to do with the threat of the disease and a lot to do with the lockdowns and school shutdowns put in place ostensibly to fight it. The chief researcher associated with the study observes that while we don’t know exactly what this will mean for today’s young people, such changes in older adults are usually connected with “cognitive decline.”

Those who dictated the shutdowns assured us that everything would be fine for these kids. After all, they could do online classes! The problem was. . .that this didn’t work. A study of national learning outcomes during the pandemic released in May by Harvard’s Center for Education Policy Research showed that “remote instruction was a primary driver of widening achievement gaps,” while those gaps did not increase in places where in-person instruction was kept up.

I could have told you that not only as a professor but also as a father. While effective online education for those who have already experienced a real, personal education may be a possibility, it is not for most kids. While one of my own children, currently a freshman in college, improved his performance during the lockdowns, I think that had to do with the fact that he was able to sleep more and had two professor parents in the house to help him out. That second part wasn’t true for most American adolescents. And even the rest of my then-K-through-12 offspring either soldiered on or began to lag in the last months of the 2020 school year. For the most part, online education gives students an excuse to be online. And being online in itself is rarely helpful to education.

If the lockdowns and school shutdowns made things worse, they were not the only factors in poor student outcomes. One blessing in disguise was the fact that so many parents were able to eavesdrop on what their children were being taught in their online classes. In many cases, it was radical race or gender ideology or explicit sexual practices. In other cases, it was simply “not much.”

The truth is, “not much” was often because of ideological reasons. Many people saw this week the story of Marta Shaffer, an Oroville, California, high school English teacher who refuses to teach English grammar because it is simply the “language of power” and a bunch of “made-up rules that white supremacy created for when we write papers and stuff.” In the Tik-Tok in which she revealed to the world her particular philosophy, she expanded on those “made-up” rules: “Well, let’s look at how we write essays [in which we] start with an introduction that includes a thesis, always cite your sources, use transition words like ‘however’ and ‘therefore.’ These are all made-up rules. They were created by Westerners in power.”

Given the astonishing ignorance of such a statement, she should not be teaching anything. Unfortunately, there are all too many teachers like her, captive to ideology and without any sense that such rules for a language are taught not to exercise power over students but to empower them to make clear what they are arguing (by using a thesis), to show others the evidence that they are using (by citing sources), and to show logical connections in their thought (with “however” and “therefore”). In short, these rules are taught so that students may learn to think clearly and explain their thinking to other people.

Shaffer is not alone in effectively abandoning the teaching of the English language to show her “antiracist” bona fides. A lot of so-called progressive teachers have gotten rid of the skills of reading and writing. But, to be fair, they have also gotten rid of the necessity of reading—particularly reading important texts in the western tradition. The left loves to complain about conservative “book banning,” meaning parental moves to ban explicit sex manuals or pornography from the school library. But it is the left—and teachers such as Shaffer—who have been banning all sorts of books because of their purported white supremacy. They have usually not replaced them with anything else. The problem is not even that generally better books have been replaced by generally worse books. Instead, students are reading fewer books altogether. Even many students who go to college have read very little by the time they arrive.

The result is that they know very few words. Here, again, the internet is not helping. One 2010 study from Britain showed that the teenage bloggers surveyed have an active vocabulary of only about 800 words. Perhaps that’s an exaggeration, but the truth is that young people’s vocabulary has shrunk. And that shrinkage means a lack of knowledge.

Yet high school grade inflation (and who couldn’t score well in classes that don’t require you to make coherent arguments, spell anything right, or argue anything?) makes a lot of these young people imagine they are doing just fine—and shocked when college professors tell them they are not. A survey of college students by Intelligent.com revealed that: “The vast majority of students (87%) say they have felt at least one of their college classes was too challenging and should have been made easier by the professor.” Given that 71% of these students said they studied fewer than 10 hours per week, I think there are different solutions.

Concerning the shutdowns, politicians need to say no to so-called public health experts who suggest, as Anthony Fauci did, even on his way out of government, that we should be open to shutting down schools again in the future. That simply won’t fly. And with regard to the many districts where teachers refuse to teach, whether out of ignorance, ideology, or some combination, politicians are going to have to be increasingly creative about empowering parents. Likewise, parents are going to have to continue to take up their duty as prime educators and figure out whether home school, charter school, or private school is necessary so that their children can actually be prepared for college or trade school, the world of work, and the duties of citizenship.

Professors—myself included—are going to have to work hard not only at catching many students up on skills and vocabulary, but also inculcating the duty and the pleasures of reading, arguing, writing, and thinking—for a good bit more than 10 hours per week.

David P. Deavel teaches at the University of St. Thomas in Houston, Texas, and is a Senior Contributor at The Imaginative Conservative.