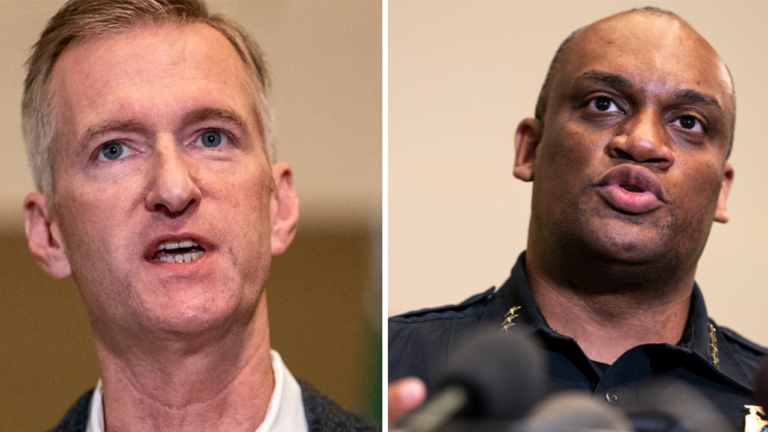 City leaders in Portland are in initial talks to re-add school resource officers to public school campuses after the district did away with police presence in 2020 as protests and riots raged across the country in support of defunding the police following the killing of George Floyd.

“I think there’s interest on both sides,” he added

The talks come as the Portland Public Schools district in the Portland area reel from their third shooting outside a school in two months.

A 16-year-old student was wounded Monday outside Cleveland High School in a suspected drive-by shooting. Police are searching for the suspects and said at least a dozen shell casings were left at the scene.

Three students at Jefferson High School, another school in the district, were injured in the last two months in two separate shootings, according to Oregon Live.

Jefferson High School leaders asked the police department following the violent crimes to station an officer on their campus during the day from Thanksgiving until winter break.

“Anything longer than that would have to be a more formal arrangement with the district,” said Sgt. Kevin Allen, a bureau spokesperson, Oregon Live reported.

Portland Public Schools said in a statement to Fox 12 that leaders are looking forward to having continued discussions with police about reinstalling the officers on campus.

“PPS looks forward to continued discussions with the Portland Police Bureau. We are committed to keeping our schools safe, while working collaboratively with our students and members of our community to find a solution to the senseless gun violence,” the district said.

Portland Superintendent Guadalupe Guerrero announced in June 2020 that police officers would no longer be stationed at schools within the district, or at the other two schools within Portland’s city limits.

“The time is now. With new proposed investments in direct student supports (social workers, counselors, culturally-specific partnerships & more), I am discontinuing the regular presence of School Resource Officers @PPSConnect. We need to re-examine our relationship with the PPB,” Guerrero said at the time.

Protests and riots erupted in Portland, as well as other cities across the country that summer, following the killing of Floyd in Minneapolis during an interaction with police. Portland saw at least 100 nights of protests, many of them turning violent as protesters demanded the police department be defunded in favor of social services programs and community initiatives.

Democratic Mayor Ted Wheeler said Wednesday he believed at the time it “would be a mistake” to remove school resource officers from Portland school campuses back in 2020.

However, after Guerrero’s announcement that he would pull officers from public schools in 2020, Wheeler tweeted that he agreed with the decision.

“We agree. Leaders must listen and respond to community. We must disrupt the patterns of racism and injustice. I am pulling police officers from schools,” Wheeler tweeted June 4, 2020.

Wheeler pledged on Wednesday that there will be “a closer collaboration’’ with the district and the police department, according to Oregon Live.

“If there’s one place in this community that people should feel safe above all else, it’s the kids in our schools,” he said. “We have an obligation to work together to do something about it.”

Police Chief Lovell acknowledged that staffing issues continue to affect the department, and it might be difficult to assign current officers to schools, Oregon Live reported.

As talks on re-adding officers to schools ramp up, schools are already increasing other security measures, including adding cameras and upgrading classroom doors so they can lock from the inside.

“In nearly every circumstance, school leaders will take steps to enhance their visibility around campus, open lines of communication among staff, raise situational awareness among staff and students, and solicit more information from students and families,” the district said in a message to school communities, according to Oregon Live.

Fox News Digital reached out to the school district but did not receive replies by time of publishing.