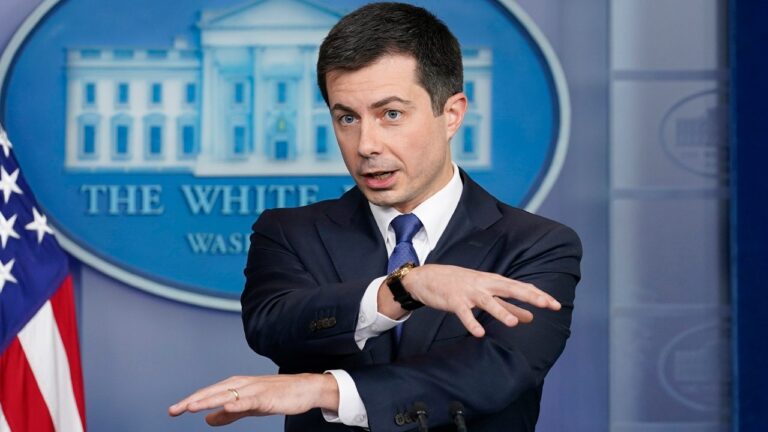 Buttigieg has traveled across the country — visiting Florida, Ohio and New Hampshire, among other states — and out of the country using a private jet fleet managed by the Federal Aviation Administration (FAA), according to flight tracking data reviewed by Fox News Digital. The flight records align with Buttigieg’s schedule of external and public engagements obtained by government watchdog group Americans for Public Trust (APT).

Bipartisan leaders on the House Oversight and Reform Committee had opened an investigation into several senior Trump administration officials’ use of government-owned and private aircraft for travel days before Price submitted his letter of resignation.

“And for someone so holier-than-thou on reducing emissions, Buttigieg sure doesn’t seem to mind the pollution caused by his literal jet-setting,” she continued. “This is hypocrisy at its finest, and these troubling expenses to taxpayers must come under immediate scrutiny.”

While the exact taxpayer cost of Buttigieg’s flights is unclear, the FAA has charged federal agencies roughly $5,000 per hour to use its fleet, the Washington Post reported amid the congressional investigation into Trump officials’ travel in 2017.

According to the flight data, Buttigieg used two taxpayer-funded Cessna 560XL private jets for trips in the 22 months since President Joe Biden selected him to lead the Department of Transportation (DOT). The FAA also operates a Gulfstream IV jet.

In one instance of his use of government-managed private jets, Buttigieg traveled roundtrip from Washington, D.C., to Las Vegas to promote public works projects in Nevada in August 2021.

In another example, Buttigieg used a private jet to fly to multiple states in August as a part of a tour highlighting grants authorized under the Infrastructure Investment and Jobs Act. He jetted to Florida, Oklahoma, Minnesota, Ohio, Nevada and New Hampshire during the trip titled “Building a Better America Tour.”

The states Buttigieg visited have largely been considered swing states in recent federal elections. When asked about his decision to travel to those particular states, he noted that Oklahoma isn’t a swing state and said “there was a great story” to tell about the infrastructure grant he was promoting there, Politico reported.

“We’re going to places that demonstrate the range of things you can do with good transportation dollars,” he said.

And, in late September, Buttigieg used an FAA private jet for a roundtrip journey to Montreal. During the visit, he attended an International Civil Aviation Organization conference.

Buttigieg also attended a ceremony during the trip hosted by a large Canadian gay rights organization where he received a prestigious award for his “contributions to the advancement of LGBTQ rights.”

Price was partially pressured to resign for using the government private jets for trips that blended both personal and professional use.

“Secretary Buttigieg mostly travels by commercial airline, and has directed that travel and logistical decisions be grounded in efficient and responsible use of taxpayer dollars,” a DOT spokesperson told Fox News Digital. “Given that commercial air travel is usually the cheapest way for the Secretary and his staff to travel, 108 of the 126 flights for DOT trips he has taken have been on commercial airlines.”

“However, there are some cases where it is more efficient and/or less expensive for the Secretary and accompanying personnel to fly on a 9-seater FAA plane rather than commercial flights,” the spokesperson continued. “Use of the FAA plane in limited, specific cases has helped to maximize efficiency and save thousands of taxpayer dollars.”

CLIMATE ACTIVISTS EMBRACE EXTREME TACTICS, VIOLENCE AS DEADLINE TO ‘SAVE THE PLANET’ DRAWS NEAR

The spokesperson didn’t share information about how much money the agency has saved taxpayers, but commercial flights from Washington, D.C.-area airports to Montreal, Las Vegas, Minneapolis and other cities Buttigieg has visited via private jet are available daily.

Federal law requires that official travel be done using the most expeditious means of transportation “practicable” and “commensurate with the nature and purpose” of said official’s duties. Walter Shaub, the former head of the U.S. Office of Government Ethics, told Politico in 2017 that federal regulations also state that “taxpayers should pay no more than necessary” for official transportation.

Meanwhile, in an interview with Condé Nast Traveler last month, Buttigieg explained how he likes to arrive to airports an hour early and has “got the pre-check and clear stuff all down” to avoid delays. He didn’t mention his use of private jet travel but said his travel is a “bit more complicated with the security arrangements.”

Over the summer, lawmakers, including Sen. Bernie Sanders, I-Vt., and Rep. Ro Khanna, D-Calif., criticized the DOT for not doing more to combat the increase in commercial flight delays. Airlines have reported an uptick in delays over the course of the last 12 months.

In addition, the transportation secretary has been a vocal proponent of climate action and has repeatedly warned of the dangers posed by human-caused global warming. He has particularly advocated for policies that would transition the U.S. economy to green energy and reduce fossil fuel emissions.

“The climate crisis is here today, threatening Americans’ lives and livelihoods, our homes and businesses, and even the way we travel and operate our federal agencies,” Buttigieg said last year after his agency published its climate adaptation and resilience plan. “The good news is that we know what to do about it, and America is fully capable of rising to the occasion.”

“While we work to reduce greenhouse gas emissions and prevent the worst outcomes of climate change, the U.S. Department of Transportation’s plan will help ensure that our transportation infrastructure, policies and programs will be more resilient to the climate impacts already facing our country,” he added.

Buttigieg attended a 2021 United Nations climate summit in the U.K. where he engaged in climate negotiations with other world leaders and pushed decarbonization policies. He remarked during the event that aviation is a “significant contributor to climate change.”