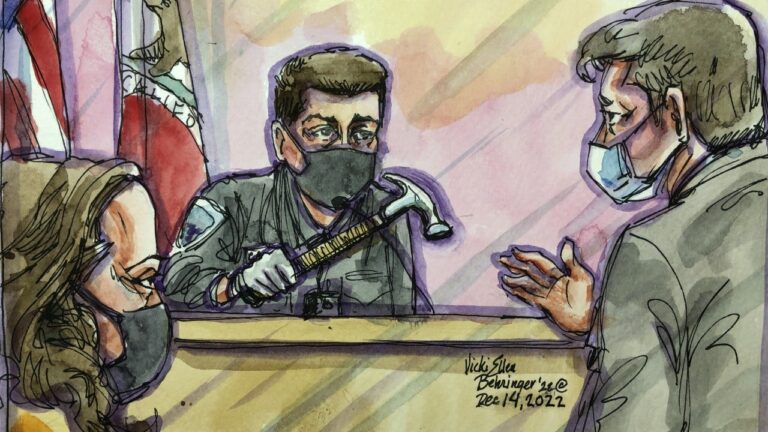 David DePape, the man accused of attacking House Speaker Nancy Pelosi’s husband in October, was found fit for trial by a judge on Wednesday after several pieces of evidence were presented in a San Francisco Superior Court.

DePape was arrested on Oct. 28 for allegedly attacking Paul Pelosi inside the San Francisco home he shares with the House speaker, who was in Washington, D.C., at the time.

A preliminary hearing on the matter was held on Wednesday, after which Judge Stephen Murphy ruled there was sufficient evidence presented for DePape to stand trial on charges of attempted murder, assault with a deadly weapon, burglary, elder abuse, false imprisonment of an elder and threats to a family member of a public official.

DePape has pleaded not guilty to state and federal charges, that also include allegations he sought to kidnap the House speaker.

Lt. Carla Hurley, who interviewed DePape for an hour the day of the attack, testified Wednesday that the defendant told her of other people he wanted to target, including California Gov. Gavin Newsom, actor Tom Hanks and Hunter Biden, one of President Joe Biden’s sons. Hurley did not say whether police had any evidence of a plot against them.

Part of the 911 recording played in court included a clip in which Paul Pelosi told a dispatcher, “There’s a gentleman here waiting for my wife to come back, Nancy Pelosi.” Pelosi also said he did not know who the man was.

San Francisco Police Officer Kyle Cagney testified that it took he and his partner about four minutes to respond to the Pelosi residence. After ringing the doorbell, the door opened quickly, Cagney said, and there were two men inside holding onto the same hammer.

Officers asked what was going on, and, according to Cagney, DePape said, “nothing,” before taking control of the hammer and striking Pelosi in the head.

The officers were reportedly overheard yelling for DePape to drop the hammer, when he said, “uh, nope.”

He was then tackled by the two officers, and Pelosi fell to the ground where he was facedown and motionless, appearing to be unconscious in a pool of blood, Cagney testified.

Then, Cagney removed from an evidence bag what is believed to be the hammer used in the attack.

DePape’s next court date is scheduled for Dec. 28.