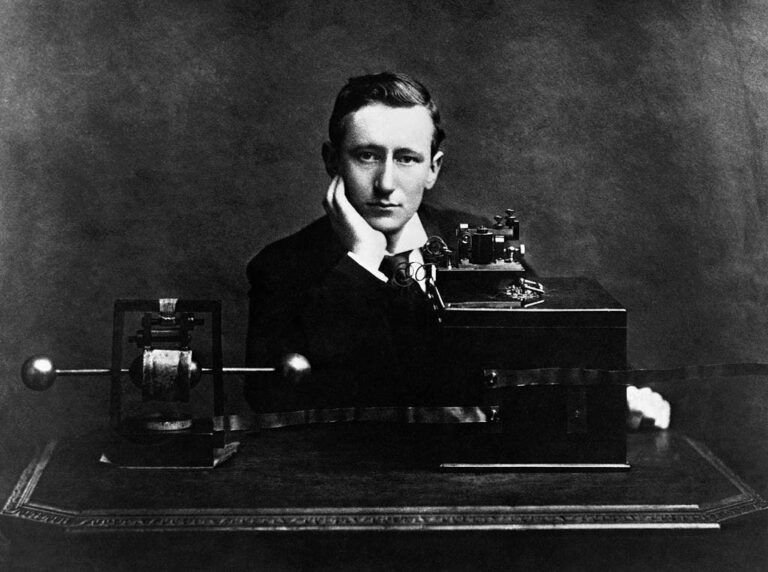 Irish-Italian inventor Guglielmo Marconi ushered in a new era of global communications, sending the first radio transmission across the Atlantic Ocean on this day in history, Dec. 12, 1901.

The message was merely the letter “s” in Morse code (dot-dot-dot). But it proved after years of advances by Marconi that radio could make the world a smaller place.

The wireless signal traveled 2,000 miles from a transmitting station in Poldhu, Cornwall, in the far southwestern corner of England, to a receiving station in St. John’s, Newfoundland.

“Today, our world of smartphones, Bluetooth, Wi-Fi, satellite TV and radio, Global Positioning Systems and wireless computer networking was largely imagined by and based on Marconi’s electrical experiments,” says the Pioneer Institute, in independent think tank.

“He was the first person to systematically use radio waves to communicate over long distances, develop wireless telegraphy, and is considered the ‘father of radio.’”

Marconi’s invention proved its value during one of the great disasters in human history.

“His radio apparatus is widely considered to be the reason that over 700 people survived the Titanic disaster in 1912, instead of dying as they likely would have if ships at sea were still using carrier pigeons to communicate over great distances,” writes the Federal Communications Commission.

“His radio apparatus is widely considered to be the reason that over 700 people survived the Titanic disaster in 1912.”

A Marconi wireless telegraph machine was installed on the doomed Titanic just weeks before it set sail.

Operators began frantically transmitting distress signals via radio to several nearby ships, similarly equipped, at 12:15 a.m. on the morning of April 15.

The last Titanic signal was received by RMS Carpathia sometime between 2:15 a.m and 2:25 a.m.

“Those who have been saved, have been saved through one man, Mr. Marconi … and his marvelous invention,” British postmaster general Herbert Samuel said after the disaster.

“In an ironic twist, Marconi narrowly avoided traveling on that fatal voyage — he was offered a free ticket for the Titanic but took the Lusitania three days earlier,” the BBC reported this year.

The first trans-Atlantic transmission of 1901 was merely one major step in years of effort by Marconi to advance technology that was doubted by many scientists.

“In 1895 he began laboratory experiments at his father’s country estate at Pontecchio, where he succeeded in sending wireless signals over a distance of one and a half miles,” reports the Nobel Foundation.

“In the same year he gave a demonstration to the Italian Government at Spezia where wireless signals were sent over a distance of twelve miles. In 1899, he established wireless communication between France and England across the English Channel.”

Marconi was born into both Italian and Irish aristocracy.

His father, Giuseppe Marconi, was a nobleman from the Bologna area of northern Italy; his mother, Annie Jameson, was the granddaughter of famed distiller John Jameson, founder of Jameson Irish Whiskey.

Marconi, among many claims to fame late in life, was tapped to create Vatican Radio in 1931.

“Just four days after the creation of Vatican City (in February 1929), Pope Pius XI officially commissioned the famous Italian-born radio pioneer, Guglielmo Marconi, to build the radio station inside the new state,” writes Vatican News in its history of the official state medium.

“Speaking in Italian, Marconi said: ‘I have the highest honor of announcing that in only a matter of seconds the Supreme Pontiff, Pope Pius XI, will inaugurate the radio station of Vatican City State. The electric radio waves will carry to all the world his words of peace and blessing.’”

Adds Vatican News: “Pope Pius XI thus became the first pontiff in history to address the world on the radio.”

Marconi originally intended to send his first trans-Atlantic radio message from England to a receiving station in Wellfleet, Massachusetts, on Cape Cod.

The American station was not ready on time, so the transmission went instead to Newfoundland.

“Not long after, the Wellfleet Station was ready, and on January 18, 1903, Marconi staged another world’s first (and a bit of a media event) by successfully transmitting messages between the President of the United States and the King of England,” reports the National Park Service.

The transmission station, on Marconi Beach in Wellfleet, is now the NPS headquarters of the Cape Cod National Seashore on high dunes overlooking the Atlantic Ocean.