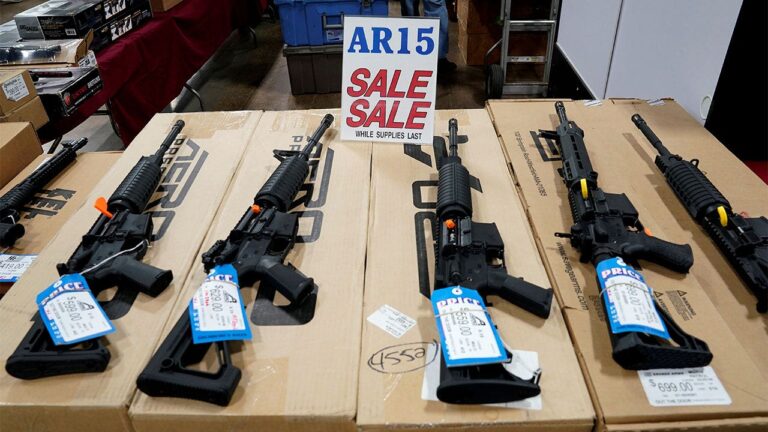 While attacking America’s “toxic gun culture,” the New York Times appeared to have inadvertently used the wrong photo while referring to AR-15s, as many Twitter users pointed out over the weekend.

The paper’s editorial board published an op-ed on Saturday titled “America’s Toxic Gun Culture,” claiming that the prevalence of AR-15s among “right-wing” figures is causing a rise in political violence.

“The AR-15 has also become a potent talisman for right-wing politicians and many of their voters. That’s a particularly disturbing trend at a time when violent political rhetoric and actual political violence in the United States are rising,” the New York Times editorial board wrote.

However, as many social media users pointed out, the photo used in the article showed rows of shotgun shells, ammo that would not be used in AR-15 weapons.

“Complains about AR15s…with a picture of shotgun shells. This is hysterical,” Club for Growth senior analyst Andrew Follett wrote.

“I find it amusing,” Townhall.com columnist Kurt Schlichter responded to a tweet pointing out the shotgun shells reading, “I am once again begging the MSM journalists to take just a couple of basic firearms class to avoid dumba**ery like this.”

Conservative writer A.G. Hamilton wrote, “Does the entire NYT really not have one editor that can review gun-related articles to notice something as basic as using a picture of shotgun shells for an article about AR-15s? Definitely inspires confidence about the contents of the article.”

BearingArms writer Ranjit Singh tweeted, “In 2020, Democrat candidate Beto O’Rourke openly pitched confiscation while the other candidates on the debate stage stood quietly in agreement. The Democrat debate audience wildly cheered at the proposal. And you wonder why GOP candidates pose with ARs in campaign ads?”

The Spectator contributing editor Stephen Miller simply tweeted an image of Russian arms dealer Viktor Bout, who was recently traded in exchange for WNBA player Brittney Griner. Bout was previously dubbed the “Merchant of Death” due to the impact of his weapons sales, but many liberal media pundits continued to praise the trade regardless.

JAN. 6 COMMITTEE HEARINGS DECLARED ‘MOST IMPORTANT TV OF THE YEAR’ BY THE NEW YORK TIMES

The Times editorial board continued to attack what they claim is an “unhealthy obsession” with the AR-15.

“A growing number of American civilians have an unhealthy obsession with ‘tactical culture’ and rifles like the AR-15. It’s a fringe movement among the 81 million American gun owners, but it is one of several alarming trends that have coincided with the increase in political violence in this country, along with the spread of far-right extremist groups, an explosion of anti-government sentiment and the embrace of deranged conspiracy theories by many Republican politicians. Understanding how these currents feed one another is crucial to understanding and reversing political violence and right-wing extremism,” the piece read.

It continued, “Institutions and individuals — prominent politicians, for instance, and responsible gun owners — could do far more to insist that assault weapons have no place in public spaces, even if they are permitted in many states, where the open carry of firearms is legal. Public condemnation of such displays is a good place to start.”

New York Times columnist Gail Collins was previously criticized by The Reload’s Stephen Gutowski in May over several inaccurate claims about AR-15 rifles.

Lindsay Kornick is an associate editor for Fox News Digital. Story tips can be sent to lindsay.kornick@fox.com and on Twitter: @lmkornick.