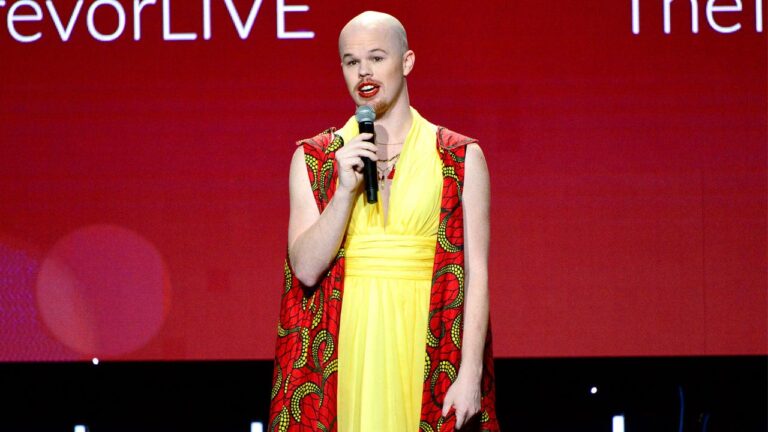 Brinton, who the Biden administration touted as among the first self-identifying non-binary officials in the federal government, is currently on leave as the deputy assistant secretary of Spent Fuel and Waste Disposition at the Department of Energy. Brinton allegedly took a woman’s suitcase from a baggage carousel at the Minneapolis St. Paul Airport worth $2,325.

Brinton was charged in October with felony theft of a movable property without consent and, as a result, faces a five-year imprisonment, a $10,000 fine or both.

Brinton, who uses they/them pronouns, is slated to appear during a court hearing on Dec. 19 in relation to the case but the Biden official was additionally charged this week for grand larceny in a separate incident at the Harry Reid International Airport in Las Vegas where Brinton allegedly stole another traveler’s luggage.

As legal woes continue to mount, the facts surrounding Brinton’s background that helped catapult the activist within the LGBTQ community appear to be crumbling.

In a piece published Wednesday by the outlet LGBTQ Nation, prominent LGBTQ activist Wayne Besen examined Brinton’s longstanding claims of being subjected to anti-gay conversion therapy as a youth, posing the question to readers, “Is Sam Brinton’s story too good to be true?”

“It remains an open question whether Brinton’s story was contrived or embellished to manipulate high-profile leaders to elevate themself into the upper echelons of LGBTQ+ activism and achieve a level of celebrity. But ex-gay conversion therapy needs no sensationalism, and Sam’s story, if truly fabricated or exaggerated, adds to that destruction by undermining credible survivor stories,” Besen wrote.

Besen began Brinton’s timeline with an 2010 interview where the young activist claimed when coming out to Brinton’s parents at age 11, Brinton’s father responded with a punch to the face. Brinton alleged years of abuse that resulted with several trips to the emergency room and claiming “My dad held a gun up to my head multiple times.”

Brinton claimed to have been sent to a Florida conversion therapist for two or three years. According to Besen, “Brinton alleges this practitioner used aversion therapy, which included sessions where they were tortured with extreme heat, ice, and needles.”

As an activist himself, Besen wrote he wanted to “work with Brinton to expose the harm of conversion therapy” and that he reached out to Brinton, who was “oddly inaccessible, communicating indirectly through intermediary LGBTQ+ activists in the Boston area, where they were attending MIT.”

“The reason for Brinton’s scarcity had to do with two simple questions I had asked them: ‘Who was your conversion therapist, and in which facility did the therapy occur?’ This basic inquiry was critically important for two reasons. First, to share Brinton’s story, we had to verify if it was true. Second, Brinton’s testimony involved a torture center where hideous abuses were presumably still occurring against children at least as young as 11. If such a place existed, there was a moral imperative to rapidly identify the abusive therapist and contact the authorities to stop the atrocities,” Besen wrote.

“Why was Sam Brinton the only survivor of conversion therapy I’ve encountered since 1998 who refused to answer these questions? Not only had every other survivor provided this information willingly, but they were eager to fight back and shut down their own therapist or ‘ex-gay’ minister.”

Besen’s inquiry eventually caught Brinton’s attention in 2011, claiming providing answers was “simply not an option” since the trauma had brought “near suicidal tendencies,” adding “and I simply don’t have his name.”

“Brinton’s reply raised some serious questions. If Brinton was in such a psychologically fragile state, why were LGBTQ+ activists having them talk to the media and lawmakers? Wouldn’t this be a cruel exploitation that put Brinton’s mental health at risk?” Besen wondered. “To believe Brinton, one would have to suspend reality and buy their explanation that they couldn’t recall the name of a therapist that, ‘for over two years, I sat on a couch and endured emotionally painful sessions.’ Does this sound plausible? Or is Brinton more concerned about keeping their story unverifiable?”

In a 2017 interview with NBC News, Brinton had claimed the conversion therapy’s office was located in an Orlando, Florida strip mall.

“I checked with a top expert on conversion therapy in the Orlando region. He said that no known conversion office in a strip mall existed during the years that Brinton attended therapy. After the airport incident, I called Brinton’s mother, Peggy Jo Brinton. She told me that her child had attended therapy, but that ‘it was not a conversion therapist.’ She refused to provide the name of the mystery counselor, but added, ‘I do love them [Sam] dearly. For the record, she also denied that Sam was physically abused or attempted suicide. Of course, let’s not deny there is a compelling interest in refuting these serious allegations,” Besen wrote.

Besen highlighted other “holes” in Brinton’s story, writing “A 2011 LGBTQ Nation story reports that ‘Sam specifies [their counselor] was a ‘religious therapist’ and not a doctor.’ Yet Brinton penned a 2014 piece for the National Center for Lesbian Rights that described their counselor as a ‘psychotherapist.’ The same year they told the U.N.’s Committee Against Torture in Switzerland, ‘When I was a child, a licensed psychotherapist tried and failed to change something I never chose.’ So when Brinton was trying to specifically ban licensed conversion therapists from practicing, they suddenly upgraded the credentials of their mystery therapist. Interesting.”

He slammed LGBTQ organizations for elevating Brinton’s profile without any scrutiny despite hearing Besen’s own concerns and also called out the media for being “culpable in this scandal,” writing “In countless stories, not a single reporter from the world’s top publications pressed Brinton to name their counselor. What kind of journalism is this?” He singled out Yahoo Life for failing to grill Brinton on the criminal charges during an interview that took place after the Minnesota incident occurred.

“Brinton should never have been given a platform by national LGBTQ+ organizations without having crucial details of their story confirmed. LGBTQ+ groups were sloppy, ethically negligent, and shockingly unprofessional, choosing expedience over prudence in turning Brinton into a national spokesperson. They were warned but didn’t listen,” Besen wrote.

The Department of Energy did not immediately respond to Fox News’ request for comment.