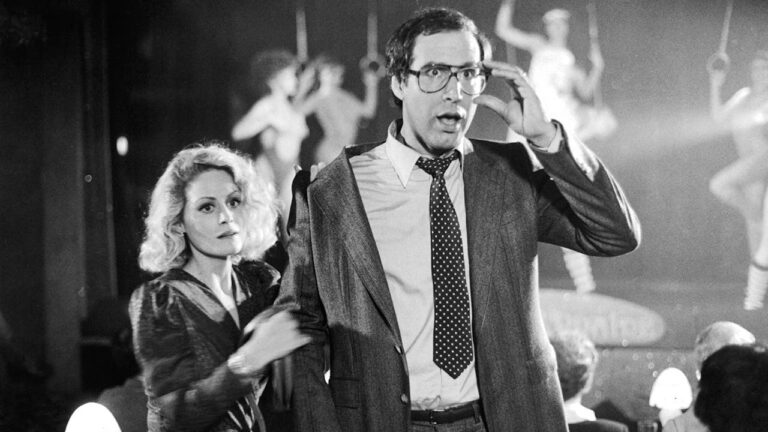 Beverly D’Angelo reflected on the chemistry that she shared with her longtime co-star Chevy Chase, who played her on-screen husband Clark Griswold in the classic “National Lampoon’s Vacation” film series.

The 71-year-old actress, who starred as Griswold family matriarch Ellen, opened up about her relationship with Chase, 79, and gave fans a behind-the-scenes look at the making of 1989’s “National Lampoon: Christmas Vacation” during a recent appearance on the “A Cinematic Christmas Journey” podcast.

“Ellen and Clark are born out of the chemistry that Chevy and I have,” D’Angelo told hosts Peter Billingsley and Nick Schenk.

She continued, “It’s not like we slip into those roles, but there’s something about our brains that makes it very easy to go into.”

“Just there’s something about our chemistry we’re comfortable with, we’re suburban kids, maybe. I don’t know. But whatever it is, it’s our chemistry that made those people,” the “Violent Night” star added.

“By ‘European Vacation.’ I inherited the role of Chevy whisperer,” D’Angelo recalled. “So it would be a weird dynamic. Like nobody would want to say, ‘Chevy, move over there’ or ‘Chevy, do this or do that’ because it’s Chevy. You know what I mean? And you don’t know what he’s going to say to you.”

D’Angelo revealed that she improvised a famous scene from “Christmas Vacation” in which Ellen places her hand over Clark’s crotch when a SWAT team busts through the doors of the family’s home with guns drawn.

The actress said filming had been delayed due to Chase, and the cast and crew had been standing around for hours. During this time, D’Angelo remembered that her stand-in had overheard director Jeremiah S. Chechik saying the reason they were behind was because “all actors were children.”

“And so we had this big group shot and it was at the end of the day and as you can see, all those people had to be… in place,” she said. “And it was a big, huge moment and we didn’t have time to mess it up.”

“I said to Chevy, ‘Jeremiah doesn’t pay any attention to me at all. He’s never watching what I’m doing.’ Because I was getting paranoid that I wasn’t turning in a performance. Because I felt like the director would say ‘That was your best.’ I couldn’t connect with him enough.”

D’Angelo said she told Chase that she thought she could put her hand over his crotch and Chechik “wouldn’t even notice.”

She explained that it was the last shot of the day, which is referred to as the “martini” shot. “I did it,” D’Angelo admitted. “And then we didn’t have an alternative.”

D’Angelo went on to say that she later rationalized the move as being in character. “I’ve got my PG story now,” she joked. “That Ellen Griswold knew that the most sacred thing in the family were the family jewels.”

“So it wasn’t just me being a little brat and seeing what I could get away with.”

D’Angelo also shared how the cast members helped Chase get through his infamous rant scene. “When Chevy goes into that rant, you will see shots of the family standing, looking at him,” she said.

“We all had cue cards around our necks,” she revealed. The actress admitted that the cast pitched in partly because they just wanted to “get it done.”

“It’s a hard monologue and also because it freed Chevy from having to worry about his lines.”

In one famous scene from the movie, a squirrel attaches itself to Clark’s back. The scene devolves into chaos as a dog owned by Cousin Eddie (Randy Quaid) chases the squirrel through the house before Clark throws open the front door. Both animals go through the front door and tackle the Griswolds’ neighbor Margo Chester (Julia Louis-Dreyfus).

“We got to untrained squirrel. And that’s why the squirrel that’s on Chevy’s shoulder most of the time is a stuffed one.”

D’Angelo said another thing that made “Christmas Vacation” special was that it was written by John Hughes. The first film was also written by Hughes and based on the short story “Vacation ‘58,” which he penned for the National Lampoon. The “Sixteen Candles” director also co-wrote the screenplay for “European Vacation” with Robert Klane.

“It’s John Hughes, that brilliant genius from Chicago who had those Midwestern values,” D’Angelo said, noting that she herself was from Columbus, Ohio.

D’Angelo told Billingsley and Schenk that she based Ellen’s character on her own mother Priscilla and took inspiration for the relationship between the Griswolds from her parents.

“I grew up witnessing a great love affair,” she said. “They got married young. They had four kids before my dad was even 29. My mother was really a traditional woman who put her heart and soul into her husband primarily, and her family.”

D’Angelo continued, “She ran the family for him so he could succeed. And my father was a musician when I was born, and then by the time I was 15, was a very successful and wealthy broadcast executive because of my mother.”

D’Angelo recalled that her mother’s full name was used when Ellen and Clark renew their wedding vows in “Vegas Vacation.” In the movie, she gives her name as “Ellen Priscilla Ruth Smith Griswold,” which was a tribute to her mother.

The “American History X” star said that contrary to what others might think, she has always viewed the “National Lampoon’s Vacation” movies as romantic comedies

“It was just me because in looking at the role and in figuring out what was what, I saw the through line of love and that this woman was devoted to this man and devoted to her family,” she explained. “And this was a romantic adventure they were having in her eyes. And she went along with it to try to make it all be OK.”

“But I’ve just always for me, the through line is love for me in life, and it is for me in this movie. And so what’s more romantic than love?”