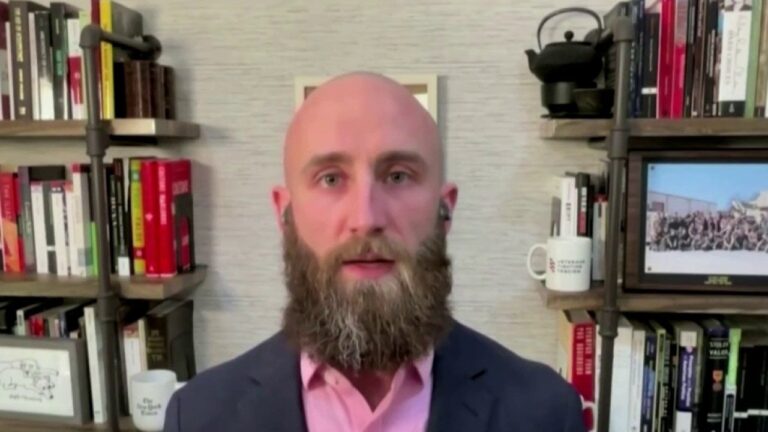 An MSNBC guest accused Elon Musk of promoting “stochastic terrorists” like Libs of TikTok to cultivate an “extreme far-right audience” on Twitter Monday.

During a segment on “Deadline: White House” focused on the emergence of extremist groups in the U.S., host Nicole Wallace asked self-declared fascism-fighter Kristofer Goldsmith to discuss how Musk’s purchase of Twitter has contributed to the issue.

Goldsmith claimed that Twitter accounts like Libs of TikTok and Gays Against Groomers created a “trans panic” online by using “slurs to try to dehumanize trans-Americans and trans individuals abroad and say that they’re predatory toward children.” He also blamed them for causing alleged threats against “drag events.”

Both accounts repost others’ social media content to expose members of the LGBTQ+ community and others who espouse radical views to children.

“What they’re doing is they’re taking this like QAnon myth, their Pizzagate pedophile conspiracy theory…and they’re mainstreaming it. All through what has become one of the most, whether we like it or not, important social media platforms in existence,” Goldsmith said.

According to his website, Goldsmith, who has made frequent appearances on MSNBC, describes himself an “investigator and consultant who takes an unconventional approach to fighting against domestic fascist organizations and unlawful militias.”

Goldsmith told Wallace that he believes Musk is intentionally destroying Twitter and turning it “into a raging cesspool because Elon thinks he has something to gain from the chaos.”

MSNBC GUEST CONDEMNS REPUBLICANS AS ‘EVIL:’ ‘WE ARE AT WAR WITH THESE PEOPLE’

Libs of TikTok, which boasts over 1.4 million followers on Twitter, was suspended six times prior to Musk’s takeover for allegedly violating the platform’s “hateful conduct” policy. The second installment of the “Twitter Files,” revealed last week that Twitter internally acknowledged that the account had “not directly engaged in behavior violative of the Hateful Conduct policy” but still proceeded with the suspensions anyway.

The account publicly thanked Musk for giving her a sense of “vindication” by publicizing Twitter’s internal communications.

“They suspended me multiple times knowing I never violated any policies. This is what happens when you talk about things that they don’t want you to talk about,” she wrote on Twitter. “So glad those days on Twitter are over. Thanks @elonmusk.”

“You’re welcome. Twitter won’t be perfect in the future,” he tweeted, “but it will be *much* better.”

Yael Halon is a reporter for Fox News Digital. Story tips can be sent to yael.halon@fox.com.