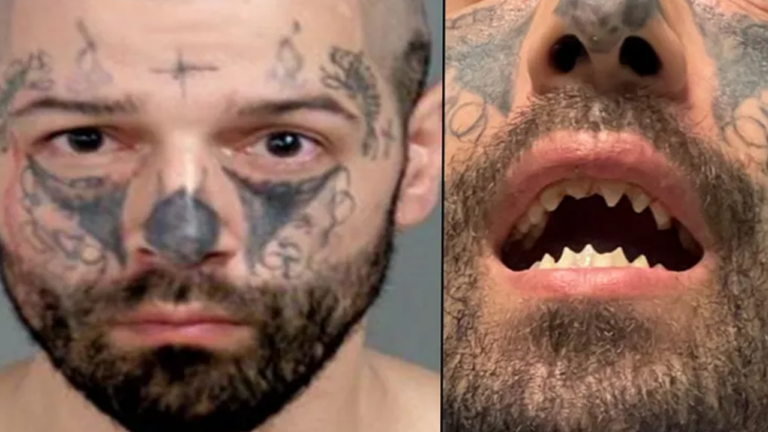 A 36-year-old Michigan man with filed down teeth is in custody after police discovered he kidnapped a vulnerable woman, sexually assaulted her for three weeks and threatened to “rip out her throat” if she didn’t do what he told her to.

Genesee County Sheriff Chris Swanson on Wednesday revealed disturbing details of the case in a press conference that led to the arrest of Michael Barajas, 36, on Dec. 8. Swanson said Barajas had filed his teeth down to points and threatened to bite the victim and rip her throat out during the course of her three-week  imprisonment.

Swanson said the week of Thanksgiving a pregnant woman in her early 20s had been kicked out of her house. Barajas spotted the vulnerable woman walking on the street alone and pulled his car up. He offered her a warm shower, a bite to eat and a place to stay.

The victim accepted, not knowing that she would be repeatedly raped and trafficked for the following three weeks.

Once the pair arrived to a dilapidated home, Barajas allegedly locked her inside a room and tied her to a bed. Genesee officials said they found rope at the scene. The victims’ room had an exterior deadbolt and all the windows in the hone were screwed shut.

“This guy used the opportunity to not only sexually assault but have people come over and traffic her as she was tied forcibly to the bed while they assaulted her,” Swanson said.

The first time she ran out of an open door during an exchange, but Barajas and the other suspects chased her down, firing shots at her and dragging her back to the bedroom.

A second attempted escape also led to her recapture. On Dec. 8, the victim suffered a medical emergency related to her pregnancy and was seen by nurses who recognized that the woman was in serious need of help.

Swanson said during the entire time she was kept at the house, Barajas threatened to bite her with his sharp fangs.

“Barajas threatened that if she didn’t do everything that he told her to do, that he would bite her neck and rip out her throat,” Swanson said.

The sheriff held up a photo of Barajas and then showed his teeth, which appear to be filed to sharp points.

Swanson said Barajas groomed the woman by filling her need of shelter and even forced her to write a letter where she described Barajas as “her daddy.”

“This guy is a monster. If you look at the teeth that are filed down and the threats of ripping out a throat, I will say no more,” he said.

After the nurses alerted authorities to the woman’s need, police raided the home and arrested Barajas on multiple charges, including human trafficking, kidnapping, sexual assault, possession of methamphetamine and ecstasy and other charges.

The sheriff says the investigation is still ongoing and authorities are asking for tips finding the other suspects. Anyone who knows something about the crime or any known associates of Barajas is being asked to call 911 or 810-257-3422.

Sarah Rumpf is a Fox News Digital Production Assistant. You can reach her on Twitter at @rumpfsarahc