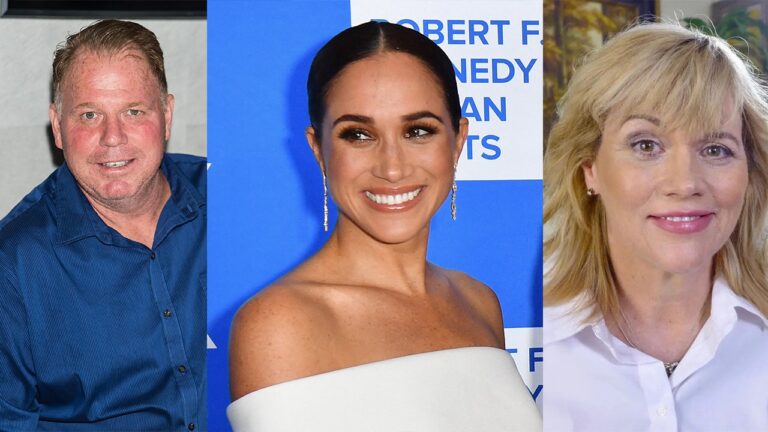 Meghan Markle’s paternal half siblings, Thomas Markle Jr. and Samantha Markle, have spoken out after the first three episodes of the Duke and Duchess of Sussex’s Netflix docuseries were released Thursday.

During an appearance on Talk TV with Piers Morgan, Markle Jr. shared his reaction to Prince Harry’s remarks about his wife’s relationship with her father Thomas Markle Sr. In the third episode of “Harry & Meghan,” the couple discussed the chain of events that took place before their May 2018 wedding that led to a total estrangement between the former “Suits” actress and her father.

“Of course, it’s incredibly sad what happened. She had a father before this, and now she doesn’t have a father. And I shouldered that, because if Meg wasn’t with me, then her dad would still be her dad,” Harry, 38, said in the third episode.

“I think it’s horrible,” Markle. Jr said. “The documentary is so far off on so many different levels, it’s really a little bit disturbing.”

In the weeks leading up to the couple’s royal wedding at Windsor Castle, Markle Sr. was embroiled in a scandal over staged paparazzi photos. After suffering from a heart attack, he decided not to attend the nuptials.

When Morgan asked Markle Jr. if there had been any attempt by Meghan to contact her father after he suffered from a stroke last May, he said, “None whatsoever.”

He added, “None of us were ever coached or given any help with the paparazzi since the very beginning, which has caused a lot of problems.”

“Nobody reached out. I actually reached out and all I got back was ‘distant family’ and she ‘doesn’t know us'”

Markle Jr. continued, “It’s just very bizarre how she just basically brushed the entire family under the carpet like we don’t exist and then lied about not having a family, and lied about she doesn’t have a family that she’s always wanted. We’ve always been here.”

Markle Jr. told Morgan that watching the Netflix series prompted him to work on his own documentary.

“The documentary is way off,” he said. “That’s what’s actually prompted me to work with my own production team, and coming out in like 2023 our side of a documentary that’s going to shed a lot of light that needs to be shed.”

He went on to say, “The amount of unprecedented files, photos and videos and documentation that we’re going to be including in our documentary — it’s going to tell a whole different story.”

‘I think the general public in the U.K. and America knows that now the Markles aren’t bad people. We’re just like a normal family like everybody else.”

“We do exist, and when one person tells lies and then tells 10 other lies to cover the one lie, this is what happens. You end up looking ridiculous.”

Markle Jr. said that he believed his father had watched the first half of the docuseries and shared an update on his health.

“His speech is definitely coming back, we are making a lot of progress with the speech therapy and for the most part it’s pretty normal, it goes off for a few moments and comes back,” he added.

“I’m just very happy that I could be here every day for him since this happened in May.”

Samantha also excoriated the docuseries and told GB News that she didn’t want her father to watch it.

“I didn’t want him to watch because like everything, it’s lie upon lie upon lie,” she said.

“He’s been through so much — two heart attacks and a stroke — and she enabled this, watched it, did nothing about it, and for Harry to say something like that is egregious,” Samantha added.

Samantha also accused Meghan of lying to her estranged daughter Ashleigh Hale. Though Meghan has said that she never had a close relationship with Samantha, the Duchess of Sussex shares a strong bond with her niece.

In the docuseries, Meghan said that she was told by the palace that she couldn’t invite Hale to her wedding because she wasn’t inviting Samantha.

“How do we explain that this half-sister isn’t invited to the wedding, but that the half-sister’s daughter is?” Meghan said in the third episode.

“With Ashleigh, the guidance at the time was to not have her come to our wedding,” she continued. “I was in the car with H. I had her on speakerphone, and we talked her through what guidance we were given and why this assessment was made … and that’s painful.”

“I think I said I was hurt on some level, but I understood where it was coming from,” Hale said in the documentary. “To know that it was because of my biological mother that this relationship that’s so important to me was impacted in that way … to feel like, because of her it was taken away, has been hard.”

Samantha told GB News that a palace insider informed her that Meghan had made the decision not to invite Hale.

“Ashleigh was lied to and my sister in fact was the one reportedly who told Ashleigh she couldn’t go to the wedding,” she said.

“So I felt like she was manipulating my daughter, and that’s really sad because my daughter seemingly was holding a grudge and feeling like I was the reason she couldn’t come to the wedding.”

Representatives for Harry and Meghan did not immediately respond to Fox News Digital’s request for comment.