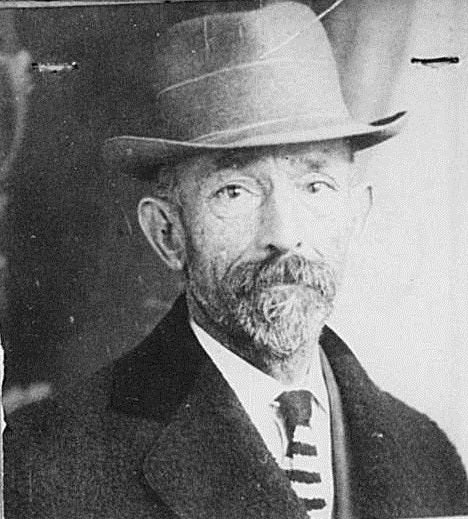 A farmer, developer and entrepreneur from New Jersey, he planted the nation’s first Christmas tree farm in the village of White Horse, in Hamilton Township, in 1901.

McGalliard had hoped to turn some rock-filled land on his property into profit.

This real-life Father Christmas Tree instead changed the way a nation celebrates a cherished holiday.

He seeded his pioneering evergreen plantation with 25,000 Norway spruce trees and 5,000 saplings that he purchased from a Mr. Charles Black of Hightstown, New Jersey, according to information provided by Hamilton Township historian Jeffrey Guear.

McGalliard began selling his trees for $1 each when the first were ready, around 1907 or 1908.

“The farm had a 10-acre gravelly field on which it had become impossible to grow a profitable farm crop,” authors Ann Kirk Davis and Henry H. Albers wrote in their 1997 book, “The Wonderful World of Christmas Trees.”

His risk and innovation lit up American agriculture like the Griswold family home on Christmas Eve.

The U.S. today boasts 15,000 Christmas tree farms. Americans purchase about 30 million trees each Christmas, almost all of them raised on farms.

“The first recorded display of a decorated Christmas Tree was in 1510, in Riga, Latvia,” the National Christmas Tree Association (NCTA) reports on its website.

Yet these trees are a relatively modern tradition in the United States.

The first real Christmas trees were sold commercially in the U.S. in 1851, “taken at random from the forests,” the NCTA states.

Famous retailer and catalog company Sears Roebuck joined the trend in the 1880s, offering artificial Christmas trees for 50 cents to $1.

The real household Christmas conifer was championed by German immigrants for many years. But the trees took root in American households only in the 20th century — in the wake of McGalliard’s daring idea to farm a new holiday tradition.

Yet McGalliard is better remembered in his hometown of White Horse today for his role at the forefront of another American trend: suburbanization.

“The late William V. McGalliard is widely known in the section around Trenton, New Jersey, as the father of the modern suburban community of White Horse,” reports a community biography shared by Guear.

Americans purchase about 30 million trees each Christmas, almost all of them raised on farms.

“More than any other single figure, he was responsible for the development, which changed it from a sparse farming district to a flourishing town, and with all the success of this enterprise as a business venture, he continued to be guided chiefly by his love of the community and its concern for its best interests,” the same biography said.

McGalliard’s two major endeavors would prove a more profound refection of America than he ever could have imagined.

William Vannest McGalliard was born on August 13, 1857, in White Horse, in Mercer County, New Jersey, where he lived for his entire life.

His parents, Jane (Ivins) and David Cubberley McGalliard had married two years earlier. His father’s family moved to New Jersey from Scotland during the American Revolution.

David McGalliard was a respected local farmer, growing fruit and raising poultry. He served on the Hamilton Township Committee and the Mercer County Board of Freeholders (county commissioners).

He also served as deacon of the local church.

“He was responsible for the development, which changed White Horse from a sparse farming district to a flourishing town.”

“Four years ago I put down a six-inch artesian well, and today I am supplying 25 or 30 houses in this suburban town, and have no doubt but I could supply 200 houses or more with the same well,” McGalliard wrote in a 1911 letter to the editor of The Times of Trenton in 1911.

He also proved a pioneer of a unique brand of commercial agriculture.

Most farmers rely on turning over crops at the very least every year — staging crops to produce as long as possible throughout the local growing season.

Christmas tree farmers live differently; they’re patient even by the standards of people who work the Earth. They can wait a decade to reap the rewards of their toil in the soil.

McGalliard’s entire life unfolded just a few miles from where the most dramatic Christmas Day story in American history unfolded — the spot where Gen. George Washington crossed the Delaware River to attack Hessian troops at Trenton in 1776.

ON THIS DAY IN HISTORY, DEC. 4, 1783, WASHINGTON BIDS FAREWELL TO HIS TROOPS AT FRAUNCES TAVERN IN NYC

“If General George Washington hadn’t [ridden] through the hamlet of White Horse way back in the 1700s, giving the village the name, chances are we would be calling that area McGalliardville … due to the incredible history this family has and had over the years in the area,” local historian Tom Glover wrote in an online account of the community.

It would be another president — who ascended to the White House 125 years after Washington crossed the Delaware — to prove McGalliard a Christmas prophet.

Christmas trees from White Horse to the White House

The New Jersey businessman found an unlikely champion for his vision of farm-raised Christmas trees: an 8-year-old boy in Washington, D.C.

His name was Archibald Roosevelt.

“Archie” was the son of President Theodore Roosevelt, who arrived at the White House in 1901, the same year that McGalliard planted 30,000 future Christmas trees.

Roosevelt was just 42 when he ascended to the Oval Office, still the youngest president in American history. He had six children.

The press corps and the nation were excited by the rare opportunity to see a young family in the White House.

“There had been first families with Christmas trees in the White House, but it was not the modern tradition we know today” when the Roosevelts arrived, Matthew Costello, senior historian at the White House Historical Association, told Fox News Digital.

Benjamin Harrison was the first president in 1889 documented to have a Christmas tree in the White House, Costello said.

It was placed in the family’s private quarters on the second floor, not on grand public display like Christmas trees at the White House are today.

“The Roosevelts traditionally celebrated the holiday with gifts, church service and a family meal,” writes the White House Historical Association. “They did not celebrate with a tree.”

“The boys decorated the tree in secret and even enlisted the help of an electrician on staff at the White House to help decorate it with lights.”

Little Archie had other ideas. With the help of White House staff and little brother Quentin, they cut down a tiny evergreen from the White House lawn in Christmas Eve.

“The boys decorated the tree in secret and even enlisted the help of an electrician on staff at the White House to help decorate it with lights,” the National Catholic Register reports.

“When Christmas morning came, Archie gathered his family outside the closet, turned on the switch, and opened the door to reveal the tree decorated with gifts for the entire family.”

The Roosevelts became a Christmas tree family in the years that followed, reflecting the evolution underway in the early 20th century across the nation.

By the time of World War II, Americans by the millions celebrated Christmas with an evergreen amid their hearth and home. The tree-farming industry was now booming coast to coast.

Lt. Col. Archibald Roosevelt became an American military hero, serving in both World War I and World War II. He received multiple honors for heroism while being wounded in both wars.

His first victory came over his powerful dad.

“On December 25th, 1902, one man got the better of Roosevelt — his eight-year-old son, Archie,” writes AtlasObscura of the event.

“And he did it all for the sake of a Christmas tree.”

A life worthy of poetry

William V. McGalliard died on April 2, 1935, in White Horse after several years of illness. He was 77 years old.

“His long life was one of useful accomplishment, rich in human values and crowned with the affectionate record of a whole circle of friends,” according to a biography provided by local historian Guear.

McGalliard’s legacy lives on in what’s now a thriving American tree farming industry that raises boughs from coast to coast.

“The aroma of a farm-grown Christmas tree provides food for the soul,” boasts the National Christmas Tree Association.

“His long life was one of useful accomplishment, rich in human values and crowned with … a whole circle of friends.”

New Jersey itself maintains a robust Christmas tree farming industry, despite its status as the most densely populated and most heavily industrialized state in the union.

New Jersey has nearly 900 Christmas tree farms, according to the New Jersey Department of Agriculture. It ranks no. 6 nationally in Christmas tree production — a big number despite the Garden State’s small size.

McGalliard unknowingly stood in a profound way at the crossroads of a changing America, one that left behind its rural roots for the suburbia he himself helped build.

While fueling America’s rush to urbanization in the 20th century, McGalliard ensured we had the color and scent of our wilderness heritage to put in our new homes to celebrate the birth of Christ, and other holidays, each and every December.

“He proved to be the city come again/To look for something it had left behind,” Frost wrote in 1916.

“And could not do without and keep its Christmas/He asked if I would sell my Christmas trees.”

To read more stories in this unique “Meet the American Who…” series from Fox News Digital, click here.