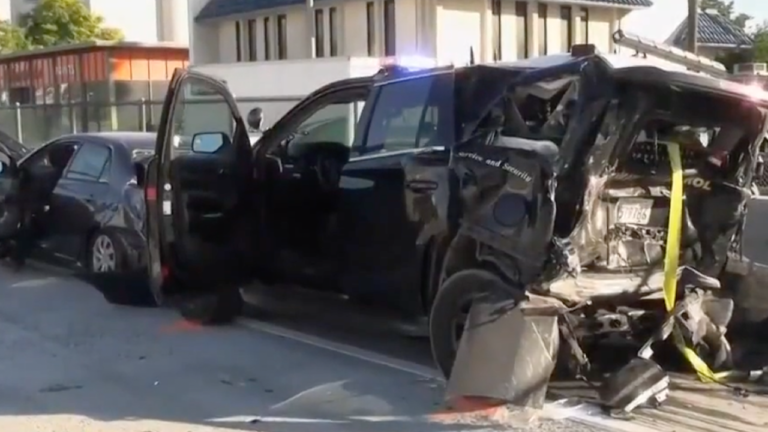 A Los Angeles-area hotel owner who was enjoying a cigarette break jumped into action on Tuesday to help save a California Highway Patrol officer who was rendered unconscious in a car crash.

“I pry open his door and I’m trying to see if he’s alert or not. I grab his radio and I say, ‘Officer down, officer down,’ and the radio goes silent and they do an all alert and they ask me where I’m at and who I am,” Shiraz Deayal, owner of a Days Inn in West Covina, told Fox 11.

Rescue teams reported to the scene in West Covina, an LA suburb, at about 2 p.m. local time Tuesday. The CHP officer was seated in his patrol car while conducting a traffic stop on the eastbound 10 Freeway at the time of the crash. Two cars had just been in a crash nearby, when a driver of a Toyota Sequoia lost control of the vehicle and rear-ended the officer’s patrol car, Fox 11 reported.

The patrol car then hit the back of the vehicle it had pulled over for the traffic stop.

OHIO GOOD SAMARITANS RUSH TO HELP POLICE OFFICER IN ROADSIDE STRUGGLE: ‘YOU DON’T DO THAT TO A WOMAN’

Deayal was having a smoke break when he saw the crash and immediately jumped into action and tried to hop over a wall to get to the highway patrol officer.

“If it was a regular accident I wouldn’t have hopped over the fence but as it was a law enforcement officer I did hop over. The officer’s safety is my most concern,” Deayal added.

He had difficulty hopping over the wall, but was helped by another good Samaritan who pushed him over.

“I’m trying to hop it, couldn’t hop it and a guy helped me out, do not know who he is, but I was the first one on the scene,” Deayal said.

The officer was unconscious and Deayal said he stayed with him until he came to.

“He was trying to do something I thought he’d never do. He was worried about the people around him and I tell him, ‘Don’t worry I got you.’ I tried to help him out as best I can,” the Days Inn owner recounted.

No arrests have been made, Fox 11 reported.

Fox News Digital reached out to California Highway Patrol for updates on the case but did not receive a response by time of publication.