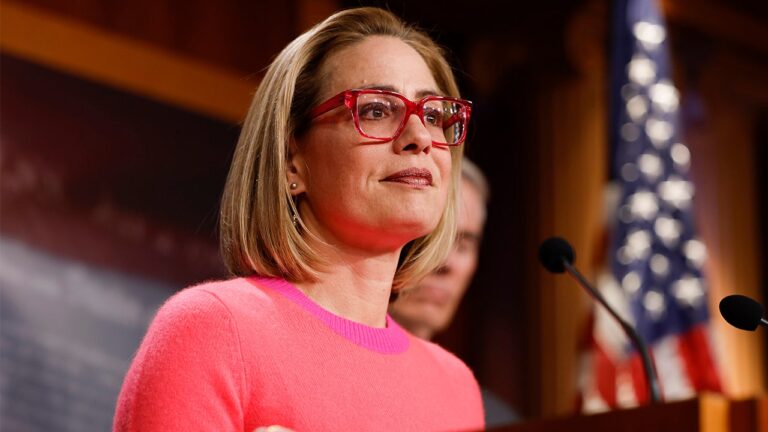 From “a gut punch” to “nothing much has changed,” lawmakers and media pundits reacted to the news that Arizona Sen. Kyrsten Sinema has left the Democratic Party to become an independent Sunday.

“Democrats are downplaying this, but it is a gut punch with real implications for how they govern and how they campaign,” ABC political director Rick Klein said Sunday.

Sinema’s pivot to being an independent gives Democrats the “slimmest of margins” in the Senate “with no wiggle room, whatsoever,” Klein added.

Several Democratic lawmakers, however, said nothing much will change in the Capitol.

“Look, I was surprised she made the change, but functionally, I don’t think that changes the thing,” Sen. Jon Tester, D-Mt., said on NBC’s “Meet the Press.” “I think we’re going to continue doing the same thing that we were doing, whether she was an independent or part of the Democratic caucus, because she’s going to continue to caucus with the Democrats.”

Tester said he’d had a positive working relationship with her in the past and hoped the two could continue to “get good things done” for the country.

“Meet the Press” host Chuck Todd used the opportunity to press Tester on why he’s “comfortable being a Democrat in Montana,” noting he votes with President Biden less than Sinema.

“Look, I’m also a farmer, and I can tell you that we would not have the farm today if it was not for the Democratic politics of FDR,” Tester said. “And my grandfather and grandmother talked to us about that. My folks talked to me about that. And I will tell you that I am forever grateful for that because I’m blessed to be a farmer. I love agriculture and I wouldn’t be one without the Democrats.”

Sen. Bernie Sanders, I-Vt., said he didn’t want to spend “a whole lot of time” talking about Sinema’s decision. He did “suspect,” however, that it had something to do with Arizona politics.

“The Democrats there are not all that enthusiastic about somebody who helped sabotage some of the most important legislation that protects the interests of working families – voting rights and so forth,” Sanders pointedly said on CNN’s “State of the Union.” “So I think it really has to do with her political aspirations for the future in Arizona. But for us, I think nothing much has changed in terms of the functioning of the U.S. Senate.”

SINEMA’S EXIT FROM DEMOCRATS COULD COMPLICATE EFFORTS TO ORGANIZE SENATE

Sinema was first elected in 2018, winning a tight race against then-Republican Congresswoman Martha McSally, and is up for re-election in 2024.

Sinema’s switch also puts the spotlight on other moderate Senate Democrats, such as Sen. Joe Manchin, D-W.Va. Some analysts have mused that Manchin will eventually leave the Democratic Party, but former New Jersey Republican Gov. Chris Christie hit the brakes on that prediction.

“He’s never going to be a Republican, in my view,” Christie said on ABC’s “This Week.” “I think Joe Manchin is a Democrat, going all the way back to his mom and dad. It’s part of who he is.”

Christie did acknowledge, however, that Manchin is “a different kind of Democrat than the Washington Democrats today.”

NBC and MSNBC political analyst Cornell Belcher suggested Sinema was a hypocrite for the move after watching an old clip of then-Democratic state Rep. Sinema in 2010 sounding off on how Democrats were “kowtowing” to former Independent Sen. Joe Lieberman of Connecticut.

“Voters, as you know, Chuck, will forgive a lot of things. But hypocrisy, as that is shown right there? That is tough for them to get over,” Belcher said on “Meet the Press.”

AFTER GEORGIA RUNOFF RESULTS, HERE’S WHAT TO EXPECT FROM SENATE, HOUSE FOR NEXT TWO YEARS

Sinema said her decision to leave the Democratic Party was “a reflection of her values” and, she suggested, “the reflection of most Arizonans.”

The senator has not announced if she’s running for re-election, but Rep. Ruben Gallego, D-Ariz., has reportedly started raising money to potentially challenge her, and the state Democratic Party has accused Sinema of being beholden to corporations and special interests.

“I support progressive candidates all over this country,” Sanders said when asked if he’d support Sinema’s potential challengers. “I don’t know what’s going to be happening in Arizona. We will see who they nominate. But certainly, that’s something I will take a hard look at.”

Cortney O’Brien is an Editor at Fox News. Twitter: @obrienc2