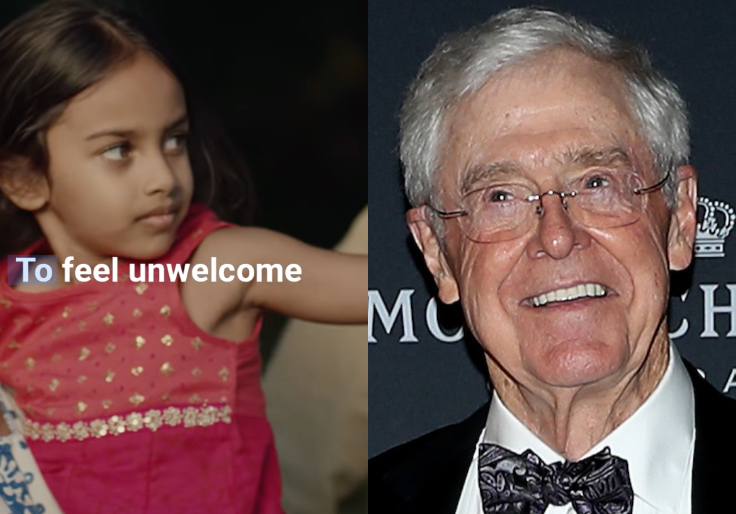 An ad campaign bankrolled in part by the megadonor Charles Koch has been tormenting NFL fans for the past two years by playing on a near-constant loop during commercial breaks.

The ad, which viewers have described as “annoying” and “freaking stupid,” is a product of a group called Belonging Begins with Us and suggests Americans are insufficiently welcoming to immigrants. Belonging Begins with Us is backed by Stand Together, a project of the Charles Koch Foundation, and a coalition of progressive philanthropists including Mark Zuckerberg and Pierre Omidyar.

The commercial features an overwrought cover version of the 1970s folk hit “Walk a Mile in My Shoes” and shows scenes of friends gathering at a birthday party and at a lunch table while shooting suspicious glances at nearby immigrants who were excluded from the group. Another scene shows a little girl of color waving at a white family, which ignores her.

“We all know what it’s like to feel left out. To feel out of place. To feel invisible. To feel unwelcome,” says a caption. “And for people who move to this country, that feeling lasts more than a moment. We can change that.”

Many viewers of the NFL Network have taken to Twitter to pan the commercial, calling the song “annoying” and arguing that the heavy-handed message unfairly portrays Americans as unwelcoming to immigrants.

“Your ‘walk a mile in my shoes’ commercial is quite possibly the most annoying thing ever put on television,” one Twitter poster complained in November.

“The ‘Walk a mile in my shoes’ commercial that plays every 7 mins on the NFL Network has to be THE single worst creation in human history,” noted another NFL fan.

Others called it the “worst commercial I have ever seen” and “OVERKILL TIMES A BILLION!!”

The campaign is the latest indicator of Koch’s emerging partnership with the far left, which also includes teaming up with Democratic super-donor George Soros to push isolationist policies through the Quincy Institute.

The commercial directs viewers to the website “Belonging Begins with Us.” The website describes itself as a “partnership between the Ad Council and a coalition of partner organizations from across the country” and aims to “create a more welcoming nation where everyone can belong.”

The coalition includes Stand Together, the philanthropic group at the center of the Koch network. Other listed coalition members are the Chan Zuckerberg Initiative, a progressive group founded by Facebook’s Mark Zuckerberg and his wife; FWD.us, an organization that lobbies against restrictions on illegal immigration; and the Democracy Fund, a left-leaning group founded by liberal philanthropist Omidyar.

The Charles Koch Foundation and Belonging Begins with Us did not respond to requests for comment.

Progressives have long demonized Charles Koch and his late brother David, whose family made billions in oil and other industries, accusing them of trying to install an “oligarchy,” destroying the environment, and seeking the “eradication of the federal government.”

But over the past few years, liberal groups have quietly made common cause with the Koch network on the loosening of immigration restrictions, diplomacy with anti-American regimes, and prison reform.

In an announcement for the ad’s launch in 2020, the coalition said the “song and powerful visuals remind audiences that we all know what it feels like to be left out—and for people who moved to this country, that feeling can last more than a moment.”