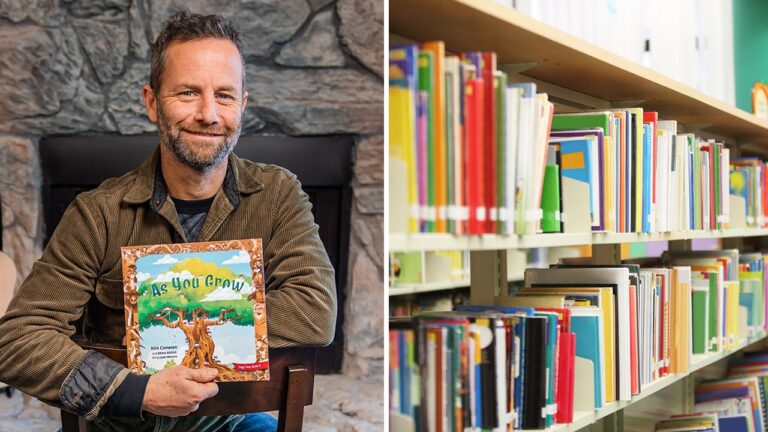 FIRST ON FOX: Actor and writer Kirk Cameron, rebuffed in recent efforts to try to deliver story-hour reading programs for kids at a number of public libraries connected to his new children’s book, is fighting back.

In exclusive comments to Fox News Digital, Cameron said late Sunday, “One of the things I love about our country is its commitment to the sharing of knowledge and the free expression of ideas.”

He added, “That is why I am excited to bring Brave Books Story Hour to public libraries across the country. Unfortunately, though many of these libraries gladly hosted the ‘Drag Queen Story Hour,’ several have refused to let me read about biblical wisdom from my new children’s book, ‘As You Grow,'” he also said.

Cameron went on, “Today, I sent a letter to the directors of the Indianapolis Public Library (in Indianapolis, Indiana) and Scarsdale Public Library (in Scarsdale, New York) asking for the same opportunity the drag queens had this year to use a room in their libraries so I can read my new book and talk about love, joy and gentleness — character traits I think we all want to see in our children.”

The actor, writer and producer, a married father of six children based in California who first found fame on the TV sitcom “Growing Pains,” added, “I hope these libraries welcome me to Indiana and New York — but should they refuse to rent me a room, like those used by drag queens in June, I am prepared to assert my rights under the Constitution in court.”

As Fox News Digital reported several days ago, Cameron has been unable to, thus far, reach scores of American children or their families in major U.S. cities via America’s public library system.

Over 50 public libraries in major cities either outright rejected his requests for a story-hour program for children or haven’t responded to his publisher’s requests, Brave Books said.

Some small rural libraries have been reaching out in the wake of these events with open arms to Cameron; Brave Books shared many of those requests.

“We have a strategic plan in place, so we are really looking at authors who are diverse. Authors of color.”

While a story-hour program for kids connected to new book releases is something libraries often present to patrons and communities, many of the same libraries that haven’t offered Cameron a slot are the same ones that have presented a “drag queen story hour” or similar programs for kids and young people, according to Cameron’s book publisher and according to a review of the libraries’ websites and event listings.

As part of its timely outreach to libraries, Brave Books contacted the Indianapolis Public Library’s central location about a possible story-hour presentation by Cameron, it shared with Fox News Digital.

The library employee who received the request was not encouraging. The response was that the library has “a strategic plan in place.”

“Let’s celebrate with our community’s greatest entertainers and literacy advocates, the drag queens!”

The individual added, “Generally when we have author visits, those are coordinated through our departments. We really have a push. We have a strategic plan in place, so we are really looking at authors who are diverse. Authors of color. That’s really been our focus.”

When a Brave Books staffer replied that Cameron’s new book for kids contributes in its own way to a diverse array of ideas and beliefs, the library representative replied, “Well, we are focusing on racial equity.”

Fox News Digital reached out to this library last week for comment. While the library indicated a response might be forthcoming, no response has arrived to date.

The Indianapolis Public Library still has a message on its website noting the program it offered to preschoolers on June 11, 2022, as part of a summer slate of events for kids.

“It’s pride month,” the notice says, “and the start of the summer reading program. Let’s celebrate with our community’s greatest entertainers and literacy advocates, the drag queens! Our theme this year is Discovery, so come dressed up.”

The event notice adds, “We will practice social distancing in the East Garden and hear local drag queens read a lot of fun stories as well as lead us in an activity.”

Regarding the public library in Scarsdale, New York, its website also still mentions the “drag queen story hour” that it presented in June 2022 for children — specifically, for the age groups “toddlers, preschool, elementary and teens.”

In the program’s description on its website, the library notes of the June 15, 2022, event held from 4:30 p.m. to 5:30 p.m., “Drag Queen Story Hour first started in 2015 by author and activist Michelle Tea in San Francisco with the goals to ‘inspire a love of reading, while teaching deeper lessons on diversity, self-love and an appreciation of others.’”

The website continues, “Join us in a celebration of Pride Month. Ages 2+. Register beginning May 27th.”

“Authors of faith — like Kirk Cameron — should not be blacklisted by the nation’s public libraries.”

The library denied Cameron a story-hour program slot. A representative said, “Thank you for thinking of us, but we are not interested in this program,” the book publisher shared.

Trent Talbot, CEO of the Texas-based Brave Books, told Fox News Digital on Sunday, “America’s woke libraries either need to stop hiding behind a mask of diversity or demonstrate their commitment to the type of inclusivity demanded and protected by the First Amendment to the U.S. Constitution.”

Talbot added, “Authors of faith — like Kirk Cameron — should not be blacklisted by the nation’s public libraries just because he teaches children about the same biblical wisdom embraced by our nation’s founders.”

Said Talbot, “We are watching to see if our nation’s libraries are more committed to promoting woke ideology than the sharing of knowledge and the free expression of ideas.”

In letters sent to the public libraries, Cameron wrote, in part, “So many of our communities, perhaps like yours, are facing rates of crime, abortion and murder well above the national average. I believe the children in your community would benefit from hearing a message teaching biblical wisdom as I explain in my new book.”

“I believe the children in your community would benefit from hearing a message teaching biblical wisdom.”

He wrote that he was “surprised to learn from my publisher that you were not interested in having me join your patrons for a reading of my new book. I hope you will revisit that request.”

He also wrote, “I hope our mutual commitment to the sharing of knowledge and ideas will afford me the opportunity to sit down and talk about my book with your patrons, bringing entertainment and comfort along with a profitable discussion that will be a blessing to everyone who attends.”

Cameron and his publisher sent free copies of “As You Grow” to the libraries.

The texts of the letters sent to the libraries are posted on BraveBooks.us/pages/letters.

As for how public libraries are funded: Local governments fund an overwhelming majority of them, as Fox News Digital previously reported.

Only a small fraction of public library funding comes from donations, grants and federal funding.