If Conservatives Want to Win Over Young Voters, They Need Some Fresh Ideas | Republican Investor

If Conservatives Want to Win Over Young Voters, They Need Some Fresh Ideas 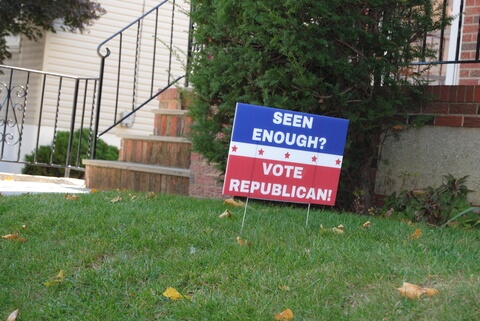 The above quotation, or some version of it, has been attributed to figures as disparate as Edmund Burke and Winston Churchill. That it has been used by so many public figures for so long is a testament to the fact that in politics, going back to at least the French Revolution of 1789, there has always been a tendency for the old and cynical to reflect on the naivety and idealism of the young. It is hardly revolutionary then to find concerns among Republicans and American conservatives about the voting habits of their children and grandchildren.

After all, the young have always wandered off. It is only where they have wandered, and when they return, put down roots, and take their places in a conservative order that should be of concern. Here lies a real problem.

While failures in American education are without a doubt exacerbating the ideology of younger voters, the idea that there is some easy “fix” or that somehow inculcating the young with the conservative canon would produce different electoral outcomes is foolish.

The main threat is that American society increasingly holds out little ability to settle down for those who wish to do so, and as a consequence is extending adolescence by years and even decades for millions of young people. Without answers to this problem, conservatives risk finding themselves facing an electorate which votes that way as well.

Conservatism requires having something to conserve. The language of self-sacrifice for the greater good, the idea that voters should embrace capitalism, free-markets, and conservative social values because it is better for other people is ultimately an anti-conservative argument. It is the left that advocates placing some intangible future above the present and the interests of abstract, more deserving, “other people” ahead of oneself. If politics becomes a mere competition between rival theories and idealisms, then Marxism can always promise more. Conservatism can merely promise a more efficient version of the present. Marxism can promise utopia. Human intuition and nature, not biased teaching, ensure that in a mere battle of abstract ideas without any concern for practical consequences, one side will win, and it will almost always be the left.

What should always shift the balance toward conservatives is experience and reality. For those without a place in society, where their own future is up in the air, Marxism will appeal. For those with a home, a family, children, and a job, then conserving and defending those institutions matters—and not abstractly, but in concrete, practical ways. Younger voters, nomadically migrating year to year, without families or children, and without property, have little to tie themselves to any one community or much to preserve.

Especially for the children of the middle class, this has meant that they have been able to dream of a far-off future without too much concern for what is happening today. As they age, responsibilities multiply. A childless 20-something who rents with roommates will be far more concerned with keeping the rent down and the police from raiding their party than they will be with property values. When they have children and own their own home, they will become concerned with the quality of the local schools and the values of their property. This is how conservatism tends to win over the long term.

This natural progression, which occurs in almost all “healthy” societies, is why the tendency of younger voters to cast ballots for Democrats should not worry Republicans or conservatives per se. There are structural reasons why this evolution happens, and generally when it has not historically, it has been because something is grievously wrong. In Weimar Germany, the Nazis and communists drew their strongest support from young voters, a constituency which saw no future in the Weimar system and therefore cast ballots for its enemies. What should concern every American, not just Republicans, is whether the wider sickness in the American economy and society are going to prevent the problem from self-correcting.

There is a tendency on the right to see these problems first and foremost in cultural terms: the reason young voters are left-wing is because they are indoctrinated to be so. The last two weeks have seen a host of articles on left-wing indoctrination in education, building on concerns that have developed over the last two years, especially regarding sexual education in schools. While teachers undoubtedly lean left of their local communities, and the professional education establishment reflects the leftward drift of academia, the effectiveness of state education in instilling political loyalty to any given system throughout history is limited. The Weimar Republic’s education failed to instill loyalty to the regime, and the Soviet Union did not exactly build a generation of committed communists. The reason was that they saw the contrast between what they were taught the system promised them, and what it was doing for them.

If the willingness of young voters to express favorable views of Socialism is a product of schools failing to adequately teach the atrocities of the 20th century, the lack of faith in capitalism is more organic. What precisely has the  “system” been doing for them? The very factors that Churchill observed drove voters to become conservative as they aged, such as buying homes, raising families, and laying down roots in communities, have been in decline. Rates of marriage are falling. Home ownership is in decline as property values are seen as assets rather than homes. For all the talk about millennials returning home to live with their parents, many do not have homes to return to, as their parents have sold them. The result is that younger Americans often find themselves adrift after college, renting with friends in large cities distant from where they grew up, burdened with debt, with an unclear road to the stability that is a perquisite for conservatism.

This in turn has left them increasingly dependent on government support championed by the left. Republican criticisms of Obamacare allowing young people to remain on their parents’ insurance plans until age 26, or of student loan forgiveness as a redistribution that does nothing to solve underlying problems, are all correct. But they are also beside the point. Neither party is presenting real answers to those problems. The Democrats offer money to mitigate their impacts, ruthlessly targeted for political advantage. The GOP offers reproaches. But those reproaches oddly enough echo the left-wing arguments on “wokeness.” There, Democrats alienate voters by telling them they are bad people for not being “woke.” Here, the GOP all too often tells younger voters they are lazy, bad people because they cannot afford a home, struggle with rising health insurance premiums, and incurred debts to earn degrees that almost every Republican employer still requires to even apply for jobs.

The failings of this message would be apparent if the message were actually aimed at younger voters. But all too often it is not. The messaging is aimed at attacking the failures of young Americans in order to contrast them with the success of other, often older Americans, as well as the minority of younger voters who have escaped this trap.

The drawback is that as a result of these attitudes, the GOP frequently neglects to engage with those who do not support them. This is apparent when it comes to many GOP candidates, who, with a few exceptions, tend to campaign by explaining how unlike everyone else in “Gen Z” they are.

The result is that American conservatism has become heavy on criticism, and short on answers. Often, the response to recent challenges has not been to confront them but to retreat. Rather than confront crime in the cities, it has been to write it off as an inevitable consequence of Democratic government, and use these cities as terrifying examples to hold the loyalty of voters in the shrinking number of safe communities. For all the talk about “woke-ism” in academia and the takeover of higher education, conservatives have neither tried to help students who were saddled with debt, nor challenge this paradigm, but instead have used the student debt crisis as some sort of illustrative moral lesson.

Support for school choice, which is a life-saver for some families in some communities, has been conflated with efforts to save the public schools in a way which has suggested conservatives believe “indoctrination” is a reason to abandon them. On economic messaging, the GOP has become obsessed with asset values, the value of the stock and housing markets, to the exclusion of whether companies employ American workers or houses are actually built to help people. If the conservative message to young people is “sucks to be you” it is no surprise if they think conservatism sucks.

This is why blaming bias in schools is a dead end. What precisely would the “conservative” message be that should be taught in schools? That redistribution is “wrong” or “inefficient?” That it is better to purchase your own health insurance? That it is in principle wrong for the government to regulate to help renters? That the government should take money from young people to subsidize their parents? How would these win over the intended audience?

A classic refrain of communists whenever the failures of their ideology to work in practice are highlighted is to insist, well it has never been properly tried. When it comes to the rejection of conservatism by young voters, too many have adopted the explanation, it has not been properly explained. The reality is that for too many young people, the status quo is not working, and they can see it is not working for them. The irony is that unlike communism, there is an extensive history of conservative values and free-market principles working to make life better for young people throughout human history. In fact, there are plenty throughout American history.

The reality is that such explanation is largely irrelevant. What Churchill highlighted is true. If Conservatism is properly implemented, which means in a way that allows young people to grow up, form families, raise kids, and buy homes, then they will become conservative by default. If, instead, it is impossible for them to purchase homes, the answer to rising crime rates is to abandon cities to anarchy and flee to gated communities, and the response to suboptimal educational outcomes is to urge parents to send their kids to private schools, then it offers no answers for a vast number of people. In which case the lack of appeal to the young should be no mystery.

If Republicans want a fresh look from young people, they need some fresh ideas that address the very real challenges young people actually face in the modern world.

Daniel Berman is a frequent commentator and lecturer on foreign policy and political affairs, both nationally and internationally. He holds a Ph.D. in International Relations from the London School of Economics. He also writes as Daniel Roman.