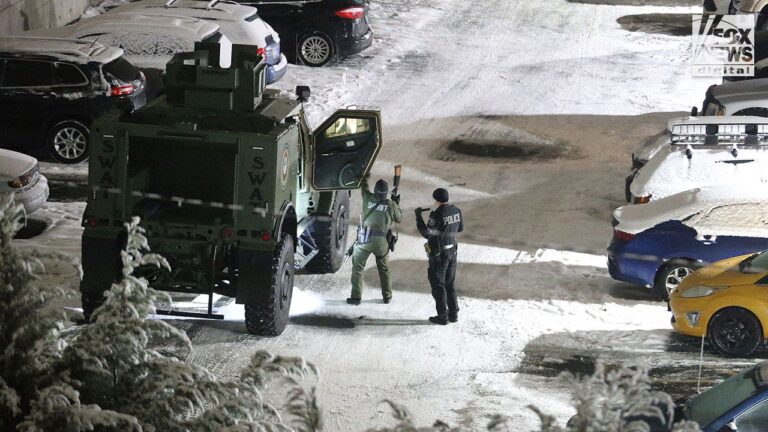 PULLMAN, Wash. – Police in Washington – just miles from the Moscow, Idaho, crime scene where four local college students were murdered – descended upon a neighborhood near a different university for what police are describing as an unrelated incident.

A community already on edge was awoken early Thursday morning, when residents at a Pullman, Washington, building on Southeast Latah Street near Main Street were evacuated following what one person described as gunshots, hours after police arrived at the scene.

A Pullman Police Department employee confirmed to Fox News Digital that the Pullman activity was unrelated to the Moscow, Idaho, murders. Information released publicly shortly thereafter described how police responded shortly after 8:35 p.m. Wednesday to a report of a “weapon offense” and arrived to learn that a man in his thirties “was threatening to kill his roommates.“

The man allegedly barricaded himself inside his apartment after police tried to speak with him. As crisis negotiators tried to make contact, he “began firing from his apartment,” at which point the building residents were evacuated, Pullman Police Chief Jake Opgenorth wrote in the release

Photos from the scene show multiple law enforcement personnel and vehicles descended upon an area adjacent to the south side of WSU Pullman campus in the early morning hours of Thursday. Neighbors and witnesses stated they heard multiple gunshots in the area.

WSU Pullman sent out its first public alert just after 3 a.m. local time about the ‘SWAT TEAM OPERATION.’ A later alert was sent out around 4:30 a.m. and stated that Pullman Police Department had “resolved the situation” and declared the scene all clear.

Phil Weiler, vice president of university marketing and communications for WSU Pullman, told Fox News Digital the school was not involved in the incident, but “issued a shelter in place order to notify our students and make sure they avoided the area.”

Schuller recalled hearing what he described as being “bean bags and tear gas” and said police appeared to break a window to a building resident’s apartment.

Schuller said residents were evacuated from the area around 4 a.m. and taken via bus to a different location.

“At the beginning of the situation, I don’t think I really grasped the gravity. But as the shots kept firing it just felt like there was a rock in my stomach, and I just felt myself getting nervous.”

The building is located just 15 minutes, and about nine miles, from the crime scene in Moscow, Idaho, where four University of Idaho students were killed more than one month ago.

The victims’ bodies were discovered just before noon on Nov. 13. The home at 1122 King Road is located just one block from the University of Idaho campus and within eyeshot of some fraternity houses.

Officials have said they believe the victims were asleep when they were attacked between 3 a.m. and 4 a.m. Each victim suffered several stab wounds, and some showed signs of trying to defend themselves.

The homicides were carried out on the second and third floors, officials said. Two other roommates were on the bottom floor of the home and were unharmed, police said.

Last week, police revealed they had received tips and leads about a white 2011 to 2013 Hyundai Elantra spotted near the crime scene in the early morning hours of Nov. 13. They are seeking to speak with the person or people who were inside the vehicle and are asking the public for any information.

IDAHO MURDERS: CORONER WEIGHS IN ON TOXICOLOGY REPORTS, DESCRIBES HER ROLE IN CASE

The Moscow Police Department is urging the public to submit any images or information considered important or useful to their investigation. The public can do so by calling 208-883-7180, submitting tips through tipline@ci.moscow.id.us or sending digital media here.

Authorities have also created a dedicated webpage related to the King Road attack.

Share. Facebook Twitter Pinterest LinkedIn Tumblr Email
Previous ArticleWanna Be a Rockstar Grandparent?
Next Article Gohmert: Without a change to how children are taught, ‘We’re going to have to get rid of the Second Amendment’