GREG GUTFELD: Biden has had it with everyone discussing his advanced age | Republican Investor

GREG GUTFELD: Biden has had it with everyone discussing his advanced age 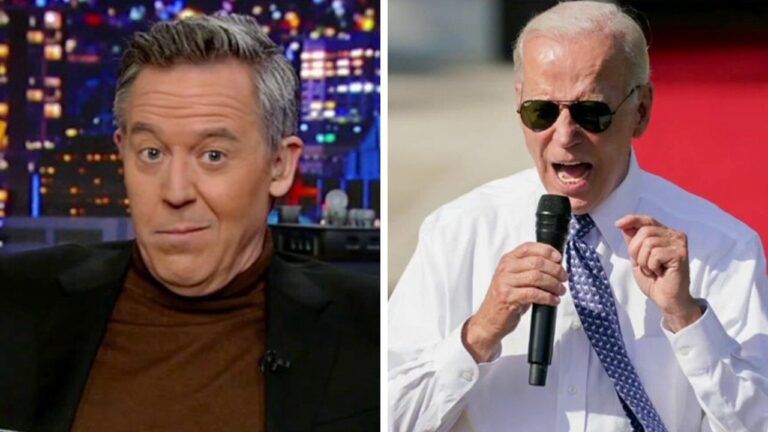 Here we go. Yes! Crazy people, yeah crazy all of you. What are you doing here? Happy Wednesday. Yeah. It’s been a minute since we last talked about the commander who craps his khakis. So let’s do it now. Joe, how you feeling?

TOM SHILLUE AS JOE BIDEN: Hey, Joe. You talk like you got a hole in your head. No, no, there ain’t no hole. It just spills out the front and the sides every night when I’m in bed.

Nice. Apparently the big guy has had it with everyone discussing his advanced age. He must be using a miracle here. But he’s tired of people bringing it up from pundits to the caretakers at Jurassic Park. Advanced age, that’s a pleasant way of saying his first hair plugs were made from a wooly mammoth. But maybe the old guy has a point. Fact is, jokes about Joe’s age are easy, just like the jokes about Trump’s temperament, remember? Trump said we’d get tired of winning and Joe’s brain cells kept thinning. But as Politico reports, “The president has vented to allies about how often his age is mentioned in the press, quote, quoting the president, ‘you think I don’t know how —- old I am?’ He said to one earlier this year.” To which the reporter replied, Sir, that’s a lamp. I’m over here, Mr. President.

BIDEN DIRECTED OFFSTAGE BY CHILD AFTER TOYS FOR TOTS REMARKS

But the sad fact is, Joe, we do think you don’t know how old you are, nor do you know where you are and how to exit from a stage and who your grandchildren are. At 80, he’s now officially the oldest president to ever wet Lincoln’s bed, at least by accident. It’s a shout-out to Bill Clinton. Oh, you’re disgusting. You’re a sick people. But he’s certainly the first to confuse his sister for his wife and sure sometimes he’ll confuse the kitchen for the bathroom. Which explains why Jill keeps a roll of toilet paper next to the waffle iron and why she often finds pancake batter on her hairbrushes. Just this week, we bore witness to the latest confused mess on Monday at a Toys for Tots event or as Joe refers to it, sniffer’s paradise. The pres[ident] needed some guidance.

PRESIDENT BIDEN DECEMBER 2022: Which way do we go? Here?

You know, it’s the first time a child coerced an adult into a van. Still, it’s refreshing to see a child leading a Democrat and not a Democrat leading a child to a gender reassignment clinic. Yeah, well, that’s important. But he ended up with a child’s toy bicycle. At least he won’t have to fall as far from that one. Yeah. He tried to mount it, but the least they could do is leave the training wheels on.

Wow. I haven’t seen a mount that awkward since I fell asleep in the woods covered in deer urine, my favorite Christmas. But doesn’t Biden remember what happened the last time he met a bike?

The upside if he fell and hit his head, it might improve his memory. That’s the joy of aging. Not only do we forget the present, we remember the past differently. We saw him fall off a bike, but he remembers riding in the Tour de France with Corn Pop. And Joe was on more meds than Lance Armstrong. Look, being old is a good place to be in life. I love it, at least for you, but not the country you govern or the bus that you’re driving. Sure, it’s fun and games in leather jackets and aviators. You know, that’s why they call them top gums. But the rest of us wonder if he’s aware the country’s in the crapper. You know, he should, it’s where he spends 80% of his day. Bottom line, people want him out. A new poll shows that 58% of voters do not want Joe to run again for that very reason, and only 30% do want him to give it another go, 12% just want him to stop licking their hair. And now groups to the left of him want him out.

POLITICAL AD PERSON 1: It’s absolutely critical that we don’t allow a Republican to win the White House in 2024.

POLITICAL AD PERSON 1: With his low popularity, it’s way too much of a gamble.

POLITICAL AD PERSON 3: If he runs, the election is at serious risk.

POLITICAL AD PERSON 5: We can’t afford to risk the White House or a Republican who could defeat status quo Joe.

POLITICAL AD PERSON 1: Our ideas are way more popular than Joe Biden is.

I wonder what Starbucks they had to close to get all those actors. Maybe there’s something good about a president who’s heading into his ninth decade. For one, there’s only so much Joe could do in a day. Then again, you can say the same thing about people in open caskets, and true old folks also have charming yarns to unravel. Although Joe’s never make it anywhere.

PRESIDENT BIDEN MARCH 2021: If it holds near and dear to you that you like to be able to anyway.

PRESIDENT BIDEN APRIL 2021: When they leave the saloon, receptionist, the saloon, the salon, they’ve maybe going to a saloon, I don’t know.

PRESIDENT BIDEN APRIL 2022: America is a nation that can be defined in a single word… I was in put in…excuse me…

PRESIDENT BIDEN OCTOBER 2021: Los Angeles and, and I, what am I doing here?

PRESIDENT BIDEN APRIL 2022: Putin’s kleptocracy…. Yeah…. The guys who are the kleptocracy.

I know it’s too easy to hit Joe for his age. You know, some people are still effective despite their advanced age. But, and there are so many other things we could hit Joe on, not just the number. But is it our fault? We hit on the obvious. I don’t remember any of the other late night hosts pumping the brakes when it came to ripping Trump. But age is a big deal, although I’m not even sure it’s Joe’s biggest problem. Being old isn’t the biggest issue if you’re surrounded by good, smart, capable people. But that’s not the case here. He’s surrounded by younger people infected with wokeness detached from real life. They’re arrogant, inexperienced, and they’re angry. They want to change America and not for the better.

So Joe may be old, but they’re kind of dangerous. Sadly, it’s his advanced age that lets them roll right over him like a speed bump with dentures. It’s too easy to blame Joe for everything, but it’s really the people running the show, and they’re so young they could share a diaper with him. And the lesson here, it’s not always the president who matters, it’s who is pulling the strings. And as long as he has a good breakfast, a good morning B.M., and someone to read him highlights at bedtimes, Joe’s just fine with the tug from above. So, Joe, take us home if you can find it.

TOM SHILLUE AS JOE BIDEN: Na na na. Look, look, I’m doing things guys half my age can never dream of doing. The economy’s down. Gas prices are up. Inflation is up. You find me a 40-year-old who can do all that? I love the eighties. That show is about me.

Greg Gutfeld currently serves as host of FOX News Channel’s (FNC) “Gutfeld!” (weekdays 11PM/ET) and co-host of “The Five” (weekdays 5PM/ET). He joined the network in 2007 as a contributor. He is the author of several books. His latest is “The Plus: Self-Help for People Who Hate Self-Help.” Click here for more information on Greg Gutfeld.