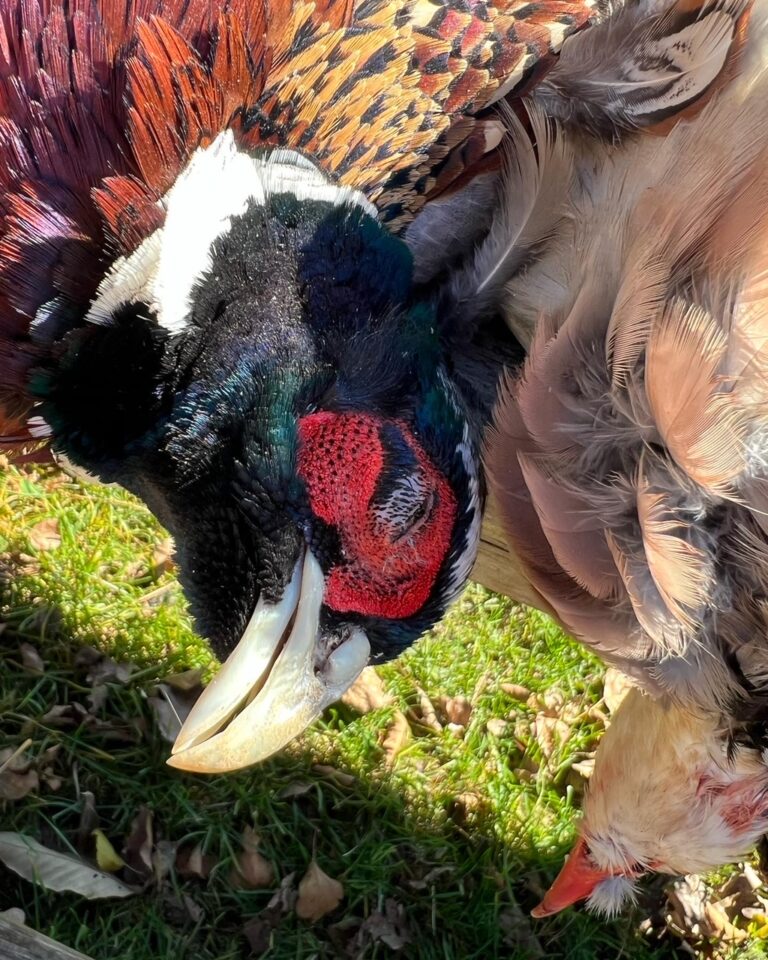 The bird flushed seemingly 6 feet in front of my face before choosing a direction and altitude of escape. I was somewhat startled at the proximity and flinch/ducked to let the chukar get past me, before pivoting counterclockwise to the rear and shouldering my pawnshop Mossberg. The first shot of high brass 20 gauge number six pellet hit the mark and the bird faltered.

As it fell the dogs were already speeding toward their goal, so I raised the muzzle as I shucked the action. Hmm, really? Wait, What? The next shell from the magazine had somehow gotten spun around and jammed in the receiver. Despite the best efforts of three people, it was unrecoverable in the field and thus ended my GalPal Upland Hunt for 2022. Fortunately that turned out to be the last bird anyway as no more flushed on our last fifty yard sweep with the dogs.

That Saturday at On Point Outfitters was a gorgeous fall day with blue sky, sunshine, and temps in the mid to high fifties. We couldn’t have had a better day if we had bribed The Almighty for it. It was just wonderful! To top off the weather, my pal Mim and I had a field, guide, and dogs all to ourselves due to some cancellations for the event. The other four women in our group went with their guide to another part of the property, so it was just us two for all those birds. I had a little initial trepidation as I only brought that little pawnshop 20 gauge.

But I needn’t have feared. I was so thrilled and proud of the performance that Mim and I turned in. We were whacking birds left and right! I think we only let two get away all morning. It was quite the rewarding experience and our guide called us “dead-eyes” LOL.

The event that I’m speaking of is an annual group of “GalPals” hunt organized by Ann Marie Foster of Calibered Events. I’ve lost track of how many years we’ve been doing this – maybe seven? But it is always a great weekend. We stay in a rented cabin, play boardgames, drink wine, eat food that everyone brings, hang out, enjoy the outdoors — and hunt for pheasants and chukars. I took a year off for the C-disease because I was worried about exposing everyone else in the house if I was unknowingly incubating from office exposure. But other than that I look forward to this retreat every year.

It is so important to me to have contact with other women hunters. The support (especially when starting later in life) is invaluable. My first bird hunt ever in my life was with Ann Marie about seven years ago, and I wouldn’t have done it at all if it wasn’t a group of only women – I was that intimidated. But that feeling quickly dissipated as I was warmly welcomed into a world of laughs, learning, support, and camaraderie.

But back to my gun problem…

Remember that I took this little gun to the Ladies Shotgun Salon in the summer? Well, after I enjoyed that experience so much with this gun, I decided to take the pawnshop Mossberg 500  20 gauge youth model along for actual hunt experience. It performed beautifully all morning – from the warm-ups on the wobble trap to downing several birds on our guided hunt. It isn’t my “primary” shotgun, but I’ve still put probably 1000 rounds through this gun since I bought it, and never had a problem until that day. So it had to be a a fluke of operator error – short stroking, rapid position change, or something.

All the way home I hoped the problem could be remedied, because this little gun has become my new favorite. Although I started out on 12 gauge some ten years ago and still enjoy it very much, I love how I’m not as sore at the end of the day with the 20 gauge. Plus, upland birds don’t require quite as much oomph as say geese or 3 gun.

I have to say that I’ve become a convert to the Mossberg 500. I have several shotguns – including a couple Benellis – but I find myself gravitating toward the ones with the safety on the tang.  Push button safeties force me to feel around with my trigger finger and I don’t like it one bit. I hate the idea of using my trigger finger for anything except the trigger. To me, dedicated fingers are safer because they offer fewer opportunities for motor mistakes. The index finger is for the trigger and the thumb is for the safety and “Never the Twain Shall Meet”. This is what works for me, YMMV. On top of that, I’m becoming a shuck-shuck addict. It just “feels right”. Don’t ask me to explain that, because I can’t.

When I got home I texted the friend who helped me with the rifle build a few years ago. His garage is gunsmithing heaven and he got the shell out in two minutes flat. (Yay!) Malfunction solved. I’m virtually positive it was my rapidly raising the gun while shucking that caused the backward rotation of the shell. I’ll have to take it to the range and play around some more now. But I’m glad there didn’t seem to be anything permanently wrong, because this is a fun little gun.

Despite my malfunction, this experience was another illustration for me that the shooting sports don’t need to be out of reach for the average person who wants to try. You don’t need a fancy-schmancy shotgun. I had a blast and great success with a $200 pawnshop gun, my father’s old upland vest, and of course a circle of fun gal pals! Who could ask for more?