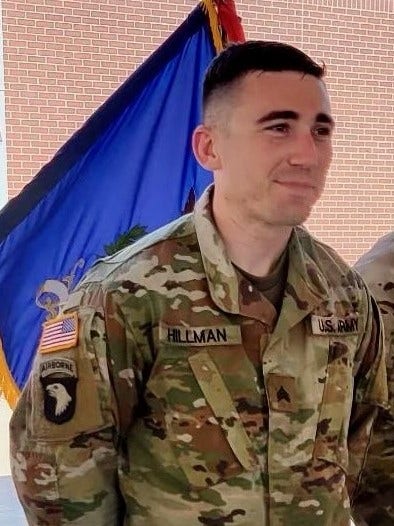 Fort Stewart officials have identified the victim in a deadly shooting at the U.S. Army Post in Georgia on Monday morning.

A press release from Fort Stewart Public Affairs identified the victim as Sgt. Nathan M. Hillman, 30, of Plump, Pennsylvania, who served as a chemical, biological, radiological and nuclear specialist.

Shortly before 11 a.m. on Monday, Fort Stewart-Hunter Army Airfield’s verified account tweeted that an incident was occurring on the base.

“EMS are on location at the building in the 2nd ABCT complex responding to what has been described as a shooting,” the tweet said. “Law enforcement has a suspect in custody.”

At the time, Hillman’s name was not released to allow officials to notify the next of kin.

While the suspect was apprehended, base officials have not released the person’s name and the investigation is ongoing.

Hillman joined the Army in February 2015, the release on Tuesday read, and was assigned to the 2nd Armored Brigade Combat Team, 3rd Infantry Division, in July 2021.

During his service, Hillman was deployed to Afghanistan once and earned two Army Commendation medals, two Army Achievement Medals and the Air Assault Badge.

“On Monday morning, the Spartan Family lost one of our own in a tragic and unexpected way,” Col. Ethan J. Diven said. “With deepest sorrow our hearts are with the families and units involved in the incident. Providing support to the impacted families and soldiers is our first priority. We are working closely with the Fort Stewart military police and U.S. Army Criminal Investigation Division.”