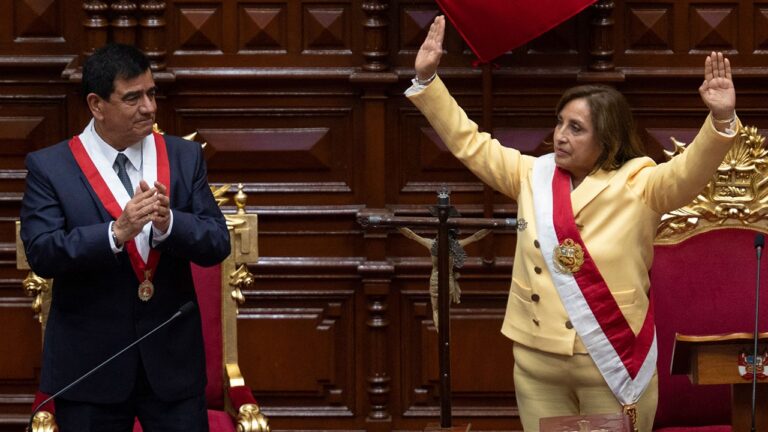 Peru’s recent impeachment of President Pedro Castillo represents an opportunity for the U.S. to reset its geopolitical and economic relations with one of its most important allies in Latin America. Peru has enjoyed an impressive track record of economic growth based on free-market reforms, and a particularly close relationship with the U.S.

However, Castillo’s election posed a threat to that relationship, as his Marxist-oriented ideology threatened the economy, while his foreign policy signaled a major shift towards anti-American interests.

“Castillo posed an institutional menace on an altogether different scale,” Daniel Raisbeck, a Latin American political analyst at the Cato Institute, told Fox News Digital. “To begin with, his party’s program for the 2021 election included numerous measures that explicitly sought to violate the constitution’s unequivocal safeguards for private property, which it declares ‘inviolable.'”

Observers say Castillo’s impeachment by Peru’s Congress this week sent a damning message to Latin America’s left that attempts to play fast and loose with the rules will be met with a stern institutional response.

By threatening to shut down Congress, rule by decree and rewrite the Constitution, Castillo emulated his Venezuelan counterpart Nicolas Maduro, who used similar maneuvers to effectively sideline the National Assembly, and then used a hand-picked constituent assembly to ram through a new Constitution, granting him near-absolute power. The Peruvian people and its institutions sent a resounding message calling for respect for the rule of law and adherence to Constitutional order.

Castillo hailed from the Peru Libre, an openly Marxist political party, and took inspiration from such leaders as Fidel Castro and Vladimir Lenin. To say that business leaders and investors were concerned with the prospect of a Castillo mandate would be an understatement.

Raisbeck said that Castillo was a clear and present danger to the Peruvian economy. “The constitution also guarantees free enterprise, foreign investment, and press freedom. Castillo’s platform, on the other hand, set out an agenda of nationalizing the mining sector and other major industries, expropriating land and getting rid of Peru’s successful private pension system,” he explained.

As Peru’s Congress proceeded on Wednesday with a third impeachment attempt, Castillo took to national television to announce its dissolution, pledging to call for a new Constitutional assembly and temporarily rule by decree in a move emulating his Venezuelan counterpart Maduro.

However, Castillo appeared to have badly miscalculated his levels of institutional support, and his surprise announcement prompted a massive resignation on the part of his cabinet and a stern call from the Attorney General to respect the Constitutional order.

“I reject the decision by Pedro Castillo to perpetrate a rupture in the Constitutional order by closing Congress. This represents a coup, and aggravates the institutional political crisis that Peruvian society can only overcome by strictly adhering to the law.”

Peru has enjoyed an impressive track record of economic growth based on free-market-oriented reforms. Yet, the election of the far-left Castillo followed a regional trend, as the Latin American left has enjoyed a powerful resurgence over the last few years, winning the vast majority of important elections, albeit it often by narrow margins, racking up important victories in Mexico, Brazil, Argentina, Chile and Colombia.

Castillo’s desperate attempt to cling to power echoes similar tactics previously used by Latin American despots: attempting to shut down opposition bodies, ruling by decree and calling for new “constituent assemblies” to rewrite the Constitution in their favor.

Castillo’s short tenure as president featured numerous corruption investigations involving charges of graft and self-dealing. More serious charges have now emerged against him and close allies alleging ties to the Shining Path, a Marxist guerrilla group based in the south of Peru, which once controlled vast swaths of the country.

Castillo was arrested late Wednesday afternoon in Lima, and charged with rebellion and breaking the Constitutional order. His current whereabouts remain unclear. Mexico’s foreign minister recently announced that they are considering an offer of asylum to the ex-president.

Rossy Saavedra Medina, who lives in the Lima neighborhood of Magdalena del Mar, called on the new president to focus on the economy. “The economy has to get back to normal now… in the last few months, it has been the poor who have suffered the most,” she told Fox News Digital.

Juan Antonio Castro, a retired math professor and dual U.S.-Peruvian citizen, told Fox News Digital that Castillo “seemed to be a corrupt individual trying to enrich himself and his family… Why do people vote for these candidates? It’s the same thing we saw happening in Venezuela.”

Protesters had gathered in various points in Lima to protest against Castillo’s arrest. Some of the protests at times turning violent as they clashed with police outside the Congress building.

Interim president Boluarte, who hails from the southern region of Apurimac, is viewed by observers as something of a blank slate, and it remains unclear how she intends to govern. While she was elected on the ticket of Castillo’s Peru Libre Party, which espouses Marxist origins, she was later expelled from the organization by party bosses when she declared that she did not plan to adhere to the party’s doctrine.