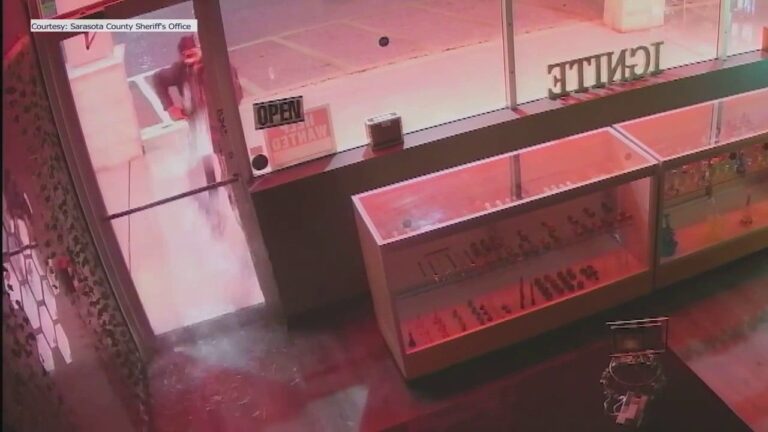 Authorities in south Florida are looking for a burglar caught on video breaking into two vape shops by shooting out the glass at the front of the businesses.

The Sarasota County Sheriff’s Office said the suspect, who is described as a White male with an average build, is responsible for burglarizing two separate Ignite Vapors stores on Bee Ridge Road in Sarasota.

The first burglary took place Dec. 5 around 2:30 a.m. Video footage shows the man shooting into the business’s glass front door until it shattered then climbing through the hole with a duffel bag.

He loaded the bag up with vaping supplies before exiting through the back door and jumping a large concrete wall, according to the sheriff’s office.

The second burglary took place three days later at another Ignite Vapors. The suspect shoots into the store’s front window a few times before entering and stealing a cash register. The sheriff’s office said he then fled from the business heading southbound on Cattlemen Road.

In an interview with Fox 13 Tampa Bay, Dana Judge with the Sarasota County Sheriff’s Office said the man seems to prioritize speed over stealth.

“Maybe he thinks it’s the fastest way, but that seems to be the only reason that would happen because it certainly is a noisy way,” Judge said. “He seems pretty agile because he’s jumped over counters in some of the videos, he jumped over a concrete wall to escape over the back of one of the stores.”

Judge told Fox 13 it is rare to see a burglar use a gun to enter a business, and investigators hope that fact will help them arrest the suspect.

TEXAS PORCH PIRATES RETURN PACKAGES THEY STOLE: ‘IT WAS SHOCKING’

Similar break-ins have happened in neighboring Manatee County, prompting both sheriff’s offices to work together to solve the crimes.

The MCSO said three vape shops in its jurisdiction have been targeted in recent weeks and two stores within miles of each other were burglarized in the same hour. Surveillance photos show at least five masked people involved in both of those crimes.

“Someone may recognize the way someone stands or the way someone walks or someone who has offered to sell these products to them. So we are hopeful someone in the community will feel compelled to report,” Judge said.

The stores are reportedly not too far from neighborhoods and authorities are hoping to catch the armed suspects before someone gets hurt.

“These, in the middle of the night, are not very popular areas, but certainly areas where people live not very far away,” Judge added.

Anyone with information related to any of the burglaries is asked to call police at 941-861-4244 or Crimestoppers at 941-366-8477. Tips can also be submitted online at crimestoppers.com.