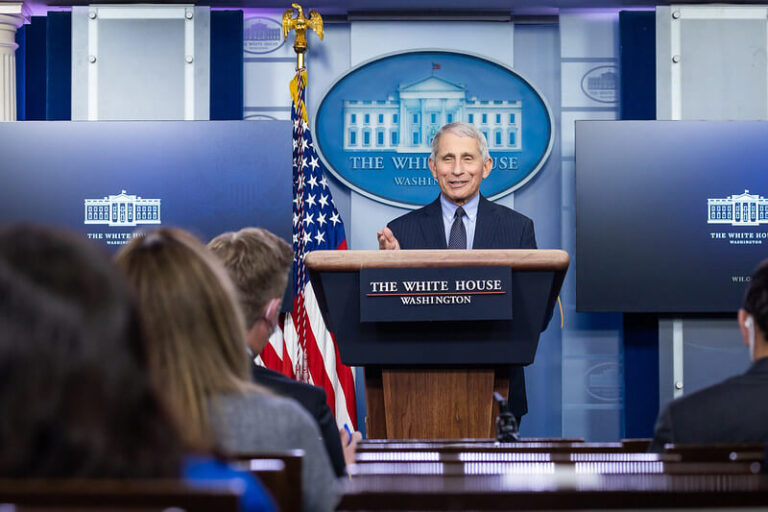 Throughout two years of lockdowns, school closures, and mask mandates, “Trust the Science” became the rallying cry of the medical establishment and media elites who insisted that every activity from dining out to attending church was tantamount to murdering your friends and family. The patron saint of this new COVID regime was Dr. Anthony Fauci, whose visage graced the covers of InStyle and People magazines and was a fixture on CNN and MSNBC. But according to a lawsuit filed by Attorneys General Eric Schmitt of Missouri and Jeff Landry of Louisiana, while Fauci was touting himself as the ultimate arbiter of “the science” in public, behind the scenes he was working alongside the Biden administration and Big Tech companies to censor dissenting voices.

Over the course of a seven-hour deposition, the full transcript of which was released earlier this week, Fauci, who is set to step down from his role as Director of the National Institute of Allergy and Infectious Diseases this month, answered questions ranging from his knowledge of the “lab leak” theory to his flip-flopping on masks and the effectiveness of experimental mRNA vaccines.

“Fauci’s recent deposition only confirmed what we already knew,” Landry said in a press release. “Federal bureaucrats in collusion with social media companies want to control not only what you think, but especially what you say.” Schmitt added in a statement of his own that “when Dr. Fauci speaks, social media censors…I encourage everyone to read the deposition transcript and see exactly how Dr. Fauci operates, and exactly how the COVID tyranny that ruined lives and destroyed businesses was born.”

Fauci spent most of the deposition dodging questions about his alleged involvement in censorship practices, displaying an unusual amount of amnesia for a high-ranking government official who was intimately involved in orchestrating and implementing COVID-19 public health policy. In total, Fauci said “I don’t recall” or “I don’t know” 174 times throughout the deposition, including when asked about emails that he sent, interviews that he gave, and other pertinent information.

Of particular interest is Fauci’s apparent forgetfulness surrounding the so-called “Great Barrington Declaration” (GBD) an open letter signed by leading global infectious disease epidemiologists and public health experts in October 2020 which advised governments of “grave concerns about the damaging physical and mental health impacts of the prevailing COVID-19 policies,” namely lockdowns and school closures. According to emails released through a Freedom of Information Act request, Dr. Francis Collins, then Director of the National Institutes of Health, ordered Fauci to publish “a quick and devastating” takedown of the GBD soon after its release. But when asked about his involvement in what clearly appears to be the beginnings of a censorship operation, Fauci said that he “would not be involved in examining this [the GBD] and doing something that would quote ‘counter’ it.”

The problem, as an article from the American Institute for Economic Research explains, is that further emails between Fauci and Collins show that Fauci immediately “jumped into action to smear and discredit the GBD in the media.” Fauci embarked on a media tour denouncing the GBD and smearing its authors as “fringe epidemiologists.” This systematic discrediting of an alternative approach to lockdowns then trickled down to social media, where it was labeled “COVID misinformation” and censored by content moderators.

Although Fauci claims that he never directly advised the Biden administration or Big Tech corporations to censor anti-lockdown posts or comments supporting the so-called lab leak theory, the deposition lays out a clear pattern of Fauci publicly endorsing specific policies and then social media companies silencing all views in conflict with those policies. According to one email that lawyers showed Fauci during the deposition, officials under Fauci’s control at the NIAID were trying to contact Google to set up a meeting “on vaccine communications, specifically misinformation.” Again, Fauci professed ignorance, claiming that he had no recollection of the email or if such a meeting took place. But soon thereafter, Twitter and Facebook began placing “warning labels” on vaccine posts and suspending accounts for spreading “vaccine misinformation” – in other words, any view that departed from the narrative Fauci dictated to the public.

The deposition also revealed that Fauci’s daughter worked at Twitter as a software engineer throughout the pandemic. In another eyebrow-raising answer, Fauci claimed that he “never” discussed content that was posted on social media platforms or anything to do with the origins of the virus with her.

However, even as mainstream news networks and social media platforms embraced Fauci’s every utterance as gospel truth and treated all other opinions as heresy, the deposition further confirms that Fauci was himself at best uncertain about a number of key facts regarding the virus and its origins. As he had previously testified before Congress, Fauci admits that other scientists raised the possibility that the virus had been created in a Chinese lab as early as January 2020 – a possibility that Fauci later dismissed in the media as a conspiracy theory. But Fauci then later says in the deposition that he was concerned about “wild speculation and accusations” on social media “blaming the Chinese” – perhaps unintentionally revealing a possible motivation for shutting down the lab leak theory. It is well-known by now that the NIAID provided funding to the very same Chinese labs from which COVID may have originated and escaped.

Fauci’s statements are just one piece of much larger inquiry by Schmitt and Landry into potential collusion between the federal government and social media companies to stifle free speech during the pandemic. As more comes to light, Fauci will likely be far from the only official implicated in this scheme, and Americans may finally learn the full extent to which their First Amendment rights were violated, all in the name of “trusting the science.”

Shane Harris is a writer and political consultant from Southwest Ohio. You can follow him on Twitter @Shane_Harris_.