China’s Protests – The Other Shoe 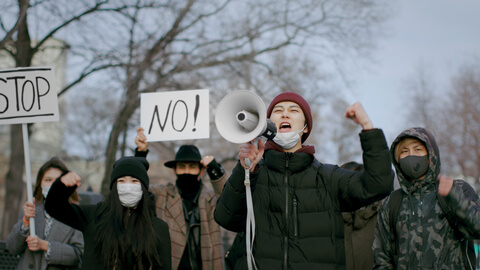 China just took a half-step toward dropping President X’s famous “zero-COVID” policy, which clamps down on public movement, crushed the China’s economy, and triggered nationwide protests in November. The Communists hope to stop the unrest, but there is another shoe to fall.

To many observers, China represents a potent, more insidious version of Soviet-style communism, oppressive with the consolation of raising living standards from near zero to poverty-level over four decades, chiefly with US money, international chicanery, and lies blithely told – too long tolerated.

That assessment is true, but China is more complicated than the Soviet Union, more dangerous economically – because the West is dependent, more dangerous militarily – because China’s wants global dominance not shared power, and believe the West, especially America, is weakening.

All this is a good lens through which to view China. Unabashed about internal oppression, external deception, and taking advantage of Western gullibility, they may be an economic “peer competitor,” but they are a national security adversary, determined to defeat the West, artful in “unrestricted warfare.”

Their brand of public diplomacy is a blend of knowing duplicity, small-country bribery, regional threats, cultural superiority, bent-knee pleas for indulgence as a “developing country,” manipulation of international opinion and organizations, and robust information warfare – seeking to penetrate, reeducate, quietly divide, confuse, and abuse Western sensibilities, all to their own benefit.

They are much like the dishonest diplomat, “who says ‘good dog, good dog,’ while he picks up a rock.” China has a whole bag of rocks, conventional and increasingly nuclear, with a bunch of other tricks.

But all news about China and its complicated nature is not bad. While their leaders, not least Xi, have visions of Communist grandeur – and we need to understand their aspirations for infiltration and domination are real, they also have weaknesses.

One of the biggest weaknesses, which US and Western leaders should be calling out regularly, is that their ideological underpinnings – and thus their way of treating people – are utterly illegitimate. To hold power by brutal oppression of individual liberties, is to indulge evil as if some end justifies that. It does not.

As Ronald Reagan pointed out in his 1982 London speech, 1983 “Evil Empire” speech, and repeatedly until the Soviet Union eventually fell, there is no way to justify an evil empire, one that suppresses not just individual liberties, not just the God-given right to pray, speak, travel, and be free, but life itself.

China, of course, does all that.  And this is where the other shoe comes in. What just happened in China, the rise of nationwide protests again the “zero-COVID” lockdowns, is more than a passing blip or fancy.

These protests, which may be diffused by President’ X’s suspension of some “zero-COVID” policies, are about more than COVID. They always were. They are about a building social disgust with economic policies that have failed, public corruption, national lies, and denial of basic rights.

Many of those involved were, as in 1989s, young people and women – a feature new to China, and to Iran, where protests also continue to reflect a deep, unmitigated “rumble in the rails.” In China, these protests prove that protests work, if not swiftly or without punishment, still they move the needle.

This is a gamble for China’s Communist leadership, as it always is for totalitarian leaders. While a total crackdown can lead to mass upheaval, concessions intended not to reform but placate, can encourage dissent.

What seems clear, whether these Chinese protests – like those in Iran – continue, grow, dissipate, are slowly snuffed out, or – if crushed – end swiftly, the Chinese people are getting fed up with a bumbling, self-interested, ultimately failed system, which has less and less legitimacy.

To borrow from Winston Churchill, this may not be the end, nor even the beginning of the end for China’s oppressive system of government, but it may be the end of the beginning, or the start of a national understanding that Communism has no legitimacy, even when pushed by President Xi.

What “zero-COVID” did to China – after China released this engineered virus on the world, regardless of how that occurred – is to show the Chinese people how oppressive, fumbling, unapologetic, and ultimately illegitimate, how without any care of concern for them, their communist government is.

That is a step in the right direction, a glimpse for the Chinese people that, however their leaders blame the West, assert military or economic power, claim cultural ascendency, they remain a backward, uncaring, manipulative, ultimately unsustainable and oppressive form of government.

When a people finally feel they have no other choice, but to stand and demand freedom, they do. How soon, in what degree, with what opening of the aperture they may get it, is always uncertain. But something has changed in China, and we are likely to see the other shoe drop, more unrest ahead.