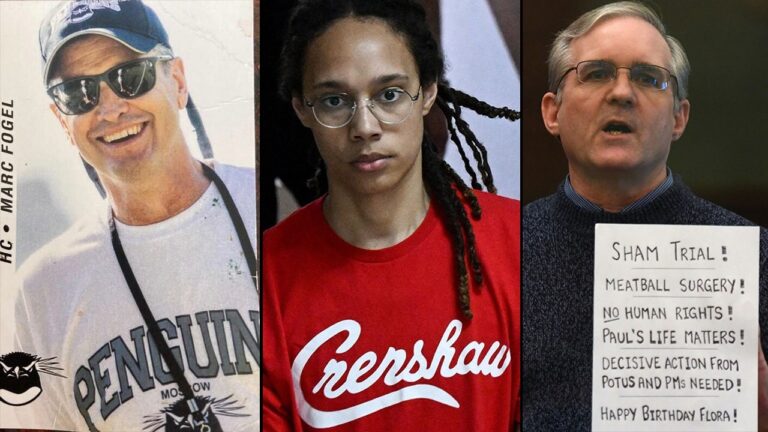 The news of WNBA player Brittney Griner’s release from detention in Russia has raised questions and concerns over the U.S. policy of negotiation as other U.S. citizens including Paul Whelan and Marc Fogel remain in Russia.

“Just like Brittney’s family, Marc’s family knows the horrors of having their loved one detained in a foreign country, put through an unjust trial despite all legal efforts, and slammed with an unreasonably long sentence during the worst diplomatic relations between Russia and America in decades,” Sasha Phillips, lawyer for the family of Marc Fogel, told Fox News Digital. She said “they were pleased to hear of Brittney’s return and were encouraged that her freedom was secured through diplomatic actions.”

Fogel was arrested in Aug. 2021 for trying to enter Russia with about half an ounce of medical marijuana he had been prescribed in the U.S. for chronic pain. After an endless wait for his trial, Fogel found himself charged with 14 years in prison for drug possession. Russian authorities sent him out to a hard-labor prison colony, at which point his family lost track of him. U.S. officials have argued that Fogel does not count as “wrongfully detained,” and thus does not qualify for a prisoner swap without explaining why.

Fogel’s lawyer said the family are “disappointed that Marc remains in Russia to serve his exorbitant sentence for possessing less than an ounce of medical marijuana,” she continued. “The family was also disheartened to not hear Marc’s name mentioned along with Paul Whelan’s in President Biden’s promise to bring other wrongfully detained Americans home during his press conference,” on Thursday.

GEN. PETRAEUS ON GRINER RELEASE: HATE TO ‘REWARD’ RUSSIA FOR SWAP, VIKTOR BOUT HAS ‘BLOOD ON HIS HANDS’

U.S. officials secured Griner’s release 10 months after Russian police arrested her on charges of drug possession for vape cartridges containing oils derived from cannabis. Her arrest, which occurred in the weeks building up to the invasion of Ukraine, became a “cause celebre” as the Biden administration put significant effort into securing her release. Biden announced Griner’s release with a tweet that included pictures of him in the Oval Office with Vice President Kamala Harris and Griner’s wife, Cherelle Griner, saying “She is safe. She is on a plane. She is on her way home.”

The Fogel family is happy to see Griner “free, safe and on her way to reunite with her family,” according to Phillips, and they hope that the success of Griner’s release can provide “momentum” for the U.S. to push for the release of other Americans, including Marc Fogel.

“This is important because Marc’s health continues to deteriorate without the proper medical care that is required in his condition – Marc has a substantial medical history of spinal disease, which requires continuous monitoring, regular doctor visits and access to adequate emergency services,” Philips explained.

However, Griner’s release came at the cost of Viktor Bout, a Russian prisoner known as the “Merchant of Death.” Authorities finally arrested Bout in 2008 through a joint sting operation between U.S. authorities, Interpol and the Kingdom of Thailand. Bout worked as an arms dealer, sometimes supplying both sides of a conflict to make money. Some critics argue that the trade of Griner for Bout ended up incredibly lopsided and painted a dangerous picture for Russia and other countries who might see celebrities detained on trumped-up charges as perfect bargaining chips for valuable political prisoners.

Rep. Guy Reschenthaler, R-PA, has worked with the State Department to secure Fogel’s release and lamented the fact that the Pittsburgh native was not even mentioned by the Biden administration when discussing Griner’s release. He called it “laughable” for the U.S. to have completed a “one-to-one” trade of Griner for Bout when considering the crimes Bout committed, and that the U.S. has “lost all leverage” in other deals.

“We’ve got to remember that Viktor Bout has the blood of Americans on his hands,” Reschenthaler said. “This is a guy that sold weapons and arms to people who use those weapons to kill Americans, and he was an arms smuggler all over the world selling arms to both sides of certain conflicts, leading to tens of thousands of lives lost.”

“So we’re now trading that guy for one person. That is laughable. That’s outrageous,” the congressman stressed.

A National Security Council spokesperson told Fox News Digital that officials have focused on how to bring Americans home as “Russia and other countries have already been willing to wrongfully detain U.S. citizens.”

“The Biden Administration has expanded the toolkit the U.S. government can use to do that, including the ability to impose serious costs and consequences such as sanctions and visa bans on governments and non-state actors who are involved in hostage-takings and wrongful detentions,” the spokesperson said, adding that the State Department has started indicating travel risks for countries that engage in this practice.

“As the use of wrongful detentions and hostage diplomacy continues around the globe, it’s clear the U.S. government needs to be more assertive,” David Whelan, the brother of former U.S. Marine Paul Whelan who has remained in Russian custody since 2018, said in a statement following Griner’s release. “If bad actors like Russia are going to grab innocent Americans, the U.S. needs a swifter, more direct response, and to be prepared in advance.”

WHO IS VIKTOR BOUT, RUSSIA’S ‘MERCHANT OF DEATH’ FREED IN PRISONER SWAP FOR BRITTNEY GRINER?

Rebekah Koffler, president of Doctrine & Strategy Consulting and a former Defense Intelligence Agency officer, told Fox News Digital that Americans who remain jailed in Russia usually do not have the same pipeline to freedom that Griner enjoyed.

“Life in any Russian prison is miserable, but conditions in a hard labor camp are inhumane,” Koffler explained. “The prisoners live in crowded barracks that sometimes house 50-60 prisoners, food is inedible and unsanitary conditions overall.”

“Brittney Griner was likely treated well because she is a celebrity, she was not physically abused,” she said. “The guards likely got special instructions to keep her safe as she was a bargaining chip for Putin, [but] Marc Fogel an ordinary American, a teacher, doesn’t have as much value for the Russians. He is probably not getting any special treatment and protections from abuse by fellow prisoners.”

Koffler speculated that Fogel was not included in the Griner-Bout swap for two reasons, mainly that the Russians wanted a one-to-one swap for “optics” and to avoid setting any precedent; and second to keep others like Fogel and Whelan “in reserves” for another swap.

“Victor Bout has extremely high value for Russia, as a GRU operative with direct links to Putin himself, but Fogel’s value is not zero either, by virtue of him being an American,” Koffler argued. “The Russians use hostage diplomacy as a form of statecraft. They know it works, and President Biden just proved that it works. Biden caved to Putin to score political points.”

Peter Aitken is a Fox News Digital reporter with a focus on national and global news.