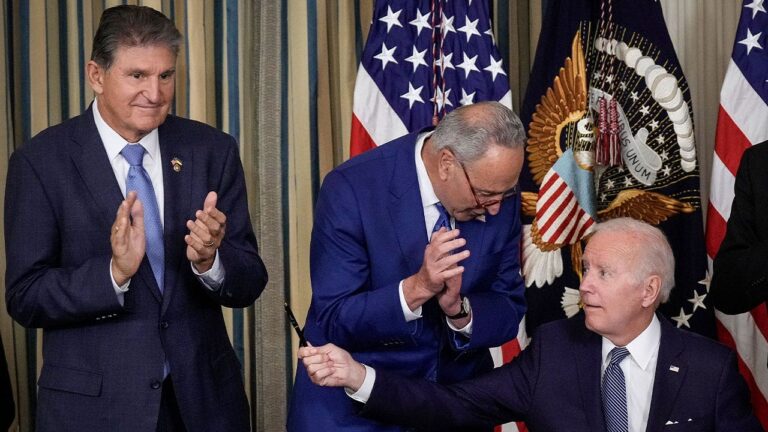 President Biden on Thursday endorsed the idea of attaching Sen. Joe Manchin’s legislation promoting oil and gas drilling to the defense policy bill Congress is hoping to pass before the end of the year.

“I support Sen. Manchin’s permitting reform proposal as a way to cut Americans’ energy bills, promote U.S. energy security, and boost our ability to get energy projects built and connected to the grid,” said the president. “Today, far too many projects face delays – keeping us from generating critical, cost-saving energy needed by families and businesses across America.”

Senate Majority Leader Chuck Schumer, D-N.Y., is slated to hold a vote this week on attaching Mancin’s legislation to the National Defense Authorization Act (NDAA). A similar push failed in the House of Representatives earlier this month over the opposition of progressive Democrats and conservative Republicans.

Progressives argued that Manchin’s bill, which would streamline the permitting process for oil and gas drilling, was a giveaway to fossil fuel companies.

“This would gut bedrock environmental regulations and fast-track fossil fuel projects,” said Rep. Rashida Tlaib, D-Mich. “I refuse to allow our residents in frontline communities to continue to be sacrificed for the fossil fuel industry’s endless greed.”

Republicans said the bill amounted to little more than a political payoff for Manchin after he cast the deciding vote in favor of Biden’s $739 billion Inflation Reduction Act. Senate Minority Leader Mitch McConnell, R-Ky., has even accused Manchin of having “traded his vote on a massive liberal boondoggle” for the permitting bill.

Manchin has dismissed such criticism and says his legislation would help cut energy costs for working families, an argument echoed by Biden.

“The Congress promised the American people a more reliable, affordable, sustainable, ‘made in the USA’ energy future when it passed the Inflation Reduction Act,” said the president. “Congress can help keep that promise and advance our energy future by passing Sen. Manchin‘s permitting reform legislation.”

Schumer’s push to attach Manchin’s legislation to the NDAA comes after Republicans blocked an effort in September to attach the measure to a government funding bill. In that instance, the support of at least 10 GOP senators was needed to overcome a filibuster within the 50-50 Senate.

“This is a zombie that will not die. It’s going to be back again and again,” said Rep. Jared Huffman, D-Calif.