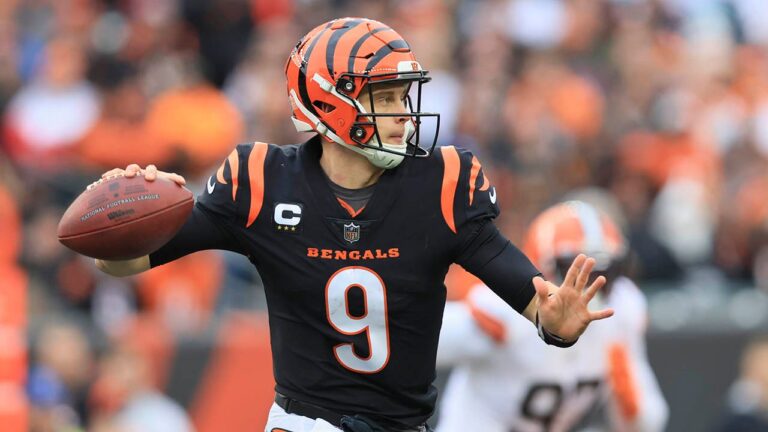 Joe Burrow has been a dominant force for the Cincinnati Bengals over the last season and a half but the one thing he was missing on his resume was a victory over the Cleveland Browns.

He entered Sunday’s game against the AFC North foe and in-state rival 0-4, and it seemed as though the Bengals were entering a trap game as the Browns were playing their second game with Deshaun Watson under center. But as Burrow began the second quarter with a 15-yard touchdown pass to Ja’Marr Chase, those thoughts began to disappear.

Cincinnati outscored Cleveland 13-3 at halftime and another Burrow touchdown pass – this time to Trenton Irwin – would help elevate the Bengals to a 23-10 victory Sunday over the Browns.

Burrow finished 18 of 33 with 239 passing yards, two scores and an interception. Samaje Perine would also score a touchdown on the ground to help boost the Bengals. Joe Mixon led the team with 96 yards on 14 carries. Chase had 10 catches for 119 yards. Irwin added two catches for 58 yards.

The Browns would cut the deficit to 10 points late in the third quarter when Watson threw his first regular-season touchdown pass in more than 700 days to tight end David Njoku. Cleveland would turn the ball over twice on downs and fail to get into the end zone for the rest of the game.

Watson finished 26 for 42 with 276 passing yards, a touchdown pass and an interception. Watson added 33 yards on the ground on six attempts. Nick Chubb led all rushers with 34 yards.

Donovan Peoples-Jones finished with 114 yards on eight catches. It was his first time surpassing 100 yards receiving in a game since Week 6 of the 2021 season against the Arizona Cardinals.

Burrow and the Bengals’ win helped keep pace in the AFC North as the rival Baltimore Ravens barely got by the Pittsburgh Steelers behind their backup quarterbacks. Cincinnati and Baltimore match up in Week 18.