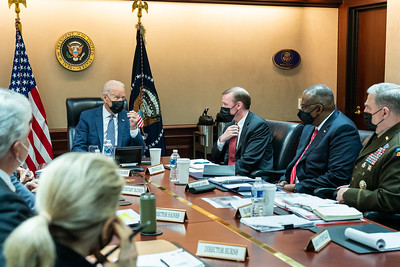 With less than a month to go until Republicans officially take control of the House of Representatives, the GOP is gearing up for a series of investigations to finally provide some answers – and hopefully some accountability – regarding the slew of devastating failures by the Biden administration and congressional Democrats over the past two years. As Axios first reported last week, at the top of that list will likely be Biden’s calamitous evacuation from Afghanistan that left 13 American service members dead and billions of dollars of sophisticated military equipment in the hands of Taliban fighters.

Ever since President Joe Biden audaciously called the U.S. exit from Afghanistan an “extraordinary success” last August, Republicans have been eager to force top Biden officials to answer some tough questions about the obvious failures at the highest levels of military leadership and the national security establishment. With the help of a compliant media, Biden has been largely successful at shirking responsibility for what is objectively one of the most shameful, tragic, and unnecessary U.S. foreign policy disasters in the country’s history. But with a Republican House majority, those responsible for this colossal failure may finally be forced to face accountability for their actions.

According to the Axios report, an internal memo from Rep. James Comer (R-KY), the ranking member on the House Oversight Committee, alleges illegal obstruction by Biden administration officials with regards to records and document requests related to the evacuation. Comer specifically cites “over 70 instances in which State, USAID, or Treasury declined, stalled, or refused to provide information, assistance, or interviews.” The stonewalling has raised fresh suspicions that high-ranking Biden officials are attempting a cover-up of their own failures, and has renewed GOP determination to conduct hearings when the next Congress convenes in January.

The first and most critical question Republicans want answered is why the Biden administration was so insistent on an accelerated withdrawal schedule. Though Biden has denied speculation that he rushed arrangements in order to complete the withdrawal by the anniversary of the September 11, 2001 terrorist attacks for symbolic reasons, multiple high-ranking military officials have testified that they advised Biden against the accelerated timeline. Thus far, the Biden administration has provided no plausible alternative explanation for why they contradicted advice from military leaders.

Republicans will also likely press for answers on why Biden abandoned the terms of the deal reached with the Taliban by the Trump administration in February of 2020 known as the Doha Agreement, which the media largely ignored. According to the terms of the deal, the U.S. agreed to withdraw American troops as long as the Taliban upheld seven conditions – chief among them a promise to do no harm to U.S. soldiers and an assurance that Afghanistan would no longer be a haven for terrorists.

Soon after Biden took office, the Taliban began violating all of those seven conditions – culminating in the suicide attack that killed 13 American service members. But instead of “hitting them harder than they’ve ever been hit before,” as Trump famously promised to do if any Americans were harmed in the withdrawal, Biden’s “response” was a drone strike that killed 10 civilians and 7 children, but no terrorists. If a Republican president had overseen this tragedy, it’s likely the media would have called for full transparency and congressional inquiries. Instead, the story quietly faded away within days of the final withdrawal.

Biden officials and top military brass have also failed to answer for why they made the fateful decision to vacate Bagram Air Base with thousands of Americans and American visa holders still in the country. Bagram was the first and eventually the largest airfield secured by U.S. forces following the September 11th attacks. The base’s proximity to Kabul made it incredibly valuable in supporting the Afghan government and ensuring the safety of American citizens abroad. On July 1st the Pentagon abandoned the base in the middle of the night without alerting Afghan forces. Before the Afghan military could secure the field, it was heavily looted, with hardened terrorists sprung out of its jail and much of its supplies going to the Taliban.

In the chaotic retreat which followed, billions of dollars’ worth of military equipment, including everything from attack helicopters to night vision goggles, fell into Taliban hands. Most unsettlingly, the U.S. also left behind military biometric devices that could aid in the identification of Afghans who assisted coalition forces – a virtual death sentence for many. No one in the Biden administration has yet been held accountable for this logistical disaster.

Perhaps most egregiously of all, the Biden administration also left behind an estimated 9,000 Americans, in addition to tens of thousands of U.S. allies and Afghan interpreters. Biden repeatedly promised that American forces would not leave until every American was safely out of the country. Yet there are still dozens of Americans unaccounted for.

Beyond simply pushing for long-overdue accountability on the Afghanistan disaster, getting to the bottom of the military and bureaucratic failures behind the evacuation is also a matter of crucial national security importance moving forward. In the annual “Pentagon Report on Chinese Military Development” released last month, military leaders revealed that China has aggressively highlighted the Afghanistan withdrawal as evidence that the United States is an “unreliable partner” and a “declining power.” This framing has been tremendously influential in eroding the confidence that key allies like Taiwan and even Japan have in the United States.

House Republicans can’t undo the Afghanistan debacle. But with well-organized hearings and the right lines of questioning, they can perhaps help prevent a similar fiasco in the future, and ensure that the American people know exactly how badly their leadership failed them.

Andrew Abbott is the pen name of a writer and public affairs consultant with over a decade of experience in DC at the intersection of politics and culture.